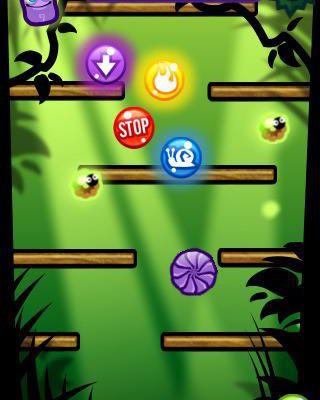 The overwhelming popularity of survival games on the iPhone in recent months has touched on about every formula we can imagine. It should come as no surprise, then, that Jungle Bug: Rock’n’Roll isn’t a title rooted in originality as much as it is in mimicry of other titles. This sort of copycat mentality is usually viewed as a negative when it comes to the App Store, but every now and then a copycat comes along and offers up a better experience than the original. Jungle Bug: Rock’n’Roll is one of those rare titles.

The basic gameplay here is cut and paste from what players have been enjoying for months in the free iPhone game FallDown!. As platforms scroll upwards from the bottom of the screen, players will navigate a round object downward for as long as they can by tilting the device to steer the circle towards openings between platforms. The game ends when the players ball gets squished at the top of the screen because they failed to navigate quickly enough. In FallDown! the round object is a neon ball. In Jungle Bug the object is a jungle bug. Cosmetic tweaks aside, this is fundamentally the exact same game. 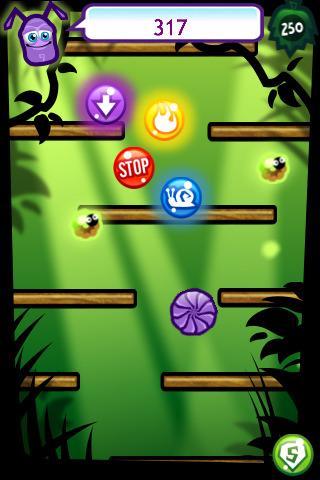 While the above is all the gameplay that FallDown! has to offer, Jungle Bug uses this formula as little more than a starting point. Some changes are immediately obvious – the visual presentation is light years beyond the barebones style offered in the earlier game. Some changes are more subtle – the speed of play is more accommodating here, and secondary objectives like collecting glow worms adds some new flavour to the mix.

The biggest difference, however, is in the inclusion of power-ups. Players can slow down the speed of the game, shrink the size of the platforms, and stop their movement entirely. A variety of special items will appear as the game progresses, giving players the opportunity to save themselves just as their little bug is about to be squished at the top of the screen.

Players will also have to avoid other bugs that will appear in the playing field from time to time. Like power-ups, the bugs will remain stationary and you’ll need to navigate around them as the platforms scroll past. As the game goes on and things speed up, this can be tricky business.

The basics work, the improvements work, and the presentation is delightful – but there’s still no denying that Jungle Bug is little more than a repaint of another game with a few new tweaks thrown in for good measure. If you’re already a big fan of FallDown! and you’re looking for a similar experience, consider this 99 cents well spent. Jungle Bug: Rock’n’Roll is unquestionably the superior product here – it’s just a shame that it feels so much like ground we’ve tread before.