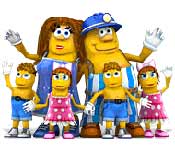 Jumpin’ Jack has absolutely nothing to do with calisthenics. Not that we all couldn’t use the exercise. Rather, it’s a story about Timbergrotes, plump and greedy creatures that live in hollowed out tree trunks. It’s also a game of side-scrolling, platform-jumping action in which you direct the game’s namesake on his quest. And, just what is that? Glad you asked.

While the Timbergrotes were once avaricious little folk, that all changed when Jack met Jeanine and avarice succumbed to love (aw, gets you right here, doesn’t it). Soon they were married, had a slew of kids and greatly affected their village for good. Accordingly, everyone’s a bit less greedy and a lot nicer – except for the underground demons. Quite unhappy with this moral makeover, the demon prince ordered Jack’s family captured. Now, Jack must pursue them and rescue Jeanine and the kids, following a trail of coins left behind.

With seven attractive locales, seven heated boss battles, over 35 side-scrolling levels, loads of secret areas to discover and a whole lot of traps and enemies to avoid, Jumpin’ Jack is a classic platformer with appeal to a wide audience, from youngsters to adults and those in between. But, while including all the trappings of the genre, it offers a more casual (as in easy) challenge compared to side-scrollers of old. The average player can easily breeze through without encountering too much frustration, while those who simply must find every secret and collect each coin will discover an extended playing experience. Either way, it’s a fun romp start to finish.

Game mechanics support keyboard and mouse input, though, for accuracy (and less untimely deaths), the keyboard is the best alternative since accuracy is critical in a jumping game. Of course, in Jumpin’ Jack Jack jumps. He jumps from platform to platform. He jumps on the heads of creatures to eliminate them. And, he jumps into hanging sacks and onto barrels to spill their contents, mostly coins, jewels, life-replenishing hearts and an occasional extra life. Barrels sporting a timer activate and explode when landed upon, destroying nearby objects and creatures. Plus, in a tribute to the Mario Bros. games, boxes positioned overhead release hidden bonuses when bopped from beneath.

Other objects play a part in Jack’s quest, as well, some good some bad. Large stones and boulders are used to crash through walls, activate triggers and mow down enemies. Spring-loaded platforms propel Jack upward, as do air mattresses (the latter, however, can be moved where needed), while logs are used to span chasms. Less-friendly objects such as thorns, spiked balls, stone walls and water (stay under too long and Jack drowns) are decidedly hazardous to his health, as are the game’s manifold enemies.

As for the game’s denizens, if they move, they’re hostile. So hop on their heads to stop them in their tracks. Opponents include worms, fish, snails, bees, bats, spiders, cockroaches, turtles, crocodiles, penguins and more. Some are dispatched with a single stomp while others take several. In either case, keep hopping ’til they’re history. Moreover, these garden-variety enemies are augmented at each world’s end with a boss monster. Reach the conclusion of the forest levels and you’ll encounter an ancient tree, at the end of the mountains a giant spider, across the desert a malevolent mummy followed by four other beastly bosses.

Apart from platform hopping, enemy dispatching, trap avoiding and treasure collecting, little else punctuates the action in Jumpin’ Jack, but what’s there is addictive. Production values are good with support for high-resolution graphics. Each level is nicely animated with flowers that open and close as Jack passes, moving background and foreground elements and parallax scrolling. Music and sound effects are well executed. Plus, the game’s enjoyable overall and easy to learn.

However, as with most side scrollers, play gets repetitive quickly. Not unexpected in this style of a game, but other elements could have been added to broaden its appeal. For instance, rather than making the level bosses just another arcade battle, the developers could have incorporated another game type like a match-three or marble-popping challenge to make it stand out from the crowd and add interest. The storyline could stand improvement and tighter integrated with gameplay, too.

What it accomplishes it does well, at least on par with similar games like Darwin the Monkey, Supercow and Turtix, offering some addictive diversion amid the routine of life if not a unique playing experience. Nevertheless, it’s about time that platformers like Jumpin’ Jack upped the ante for the genre.