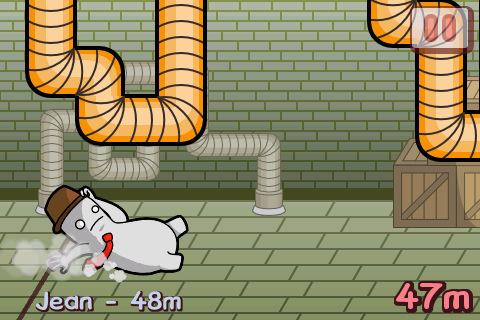 Jump & Slide is the next endless running game you need to buy.

One of the first iOS games that I absolutely fell head over heels for was Canabalt. The combination of simplicity and style really made playing it a memorable experience. It was also the first time that I had to admit to myself that the touchscreen could provide an optimum control scheme (having seen many poor ports I was still skeptical). Jump & Slide ups the complexity a tiny bit and changes up art style but provides that same fantastic experience.

Anyone want to guess what you need to do to be successful in Jump & Slide? Anyone? Yes… you in the back. Why, you’re totally correct! You’ll have to both jump and slide as you run to score points and try and survive as long as possible. Man, you’re a smart group!

If you’ve played Mirror’s Edge on the iPhone or iPad you’ll probably be somewhat familiar with the control scheme here. As you run left to right you’ll have to swipe up to jump and down to slide. Like Mirror’s Edge, you can also swipe up to get out of a slide. It’s a slight increase in options over something like Canabalt, but I think that really serves to make it a more engaging experience.

Initially the games flashes arrows on the screen that you’ll need to swipe, but those don’t last very long. Once you’re on your own the difficulty really ramps up, as you’ll both need to perceive danger and assess the best course of action, and then implement it in a second. Sure that sounds like a lot, and I suppose it is, but really what it means is “Holy crap there’s something hanging from the ceiling, better slide, swipe down.”

The game doesn’t last very long by its very nature. You’re scored on how long you survive, and while there are a few ways to earn some health, for the most part one hit will kill you. There are a few different locales that the game randomly starts in with no rhyme or reason, and with no story attached to them. Sometimes you’ll be running through an office cubicle farm, sometimes a subway car, and sometimes a dungeon. 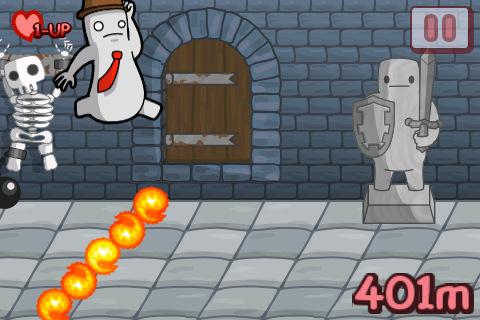 It may sound silly, but one of my favorite things about this game is the design of your character – specifically the fact that he’s forever reaching up to hold his fedora on his head. It just gives me this image of truly being late for work or something and just needing to haul it. It’s such a tiny thing, but it really gives him some personality.

With a fun goofy art style and a simple but engaging control scheme, I definitely enjoyed my time with Jump & Slide. Sometimes I felt like I didn’t have enough time to string together multiple moves in the more complex sections, but frankly, that’s the game – it’s not supposed to be super easy. If you enjoyed Canabalt or Mirror’s Edge, you’ll definitely want to pick up Jump & Slide.

The Stroke of Midnight Review