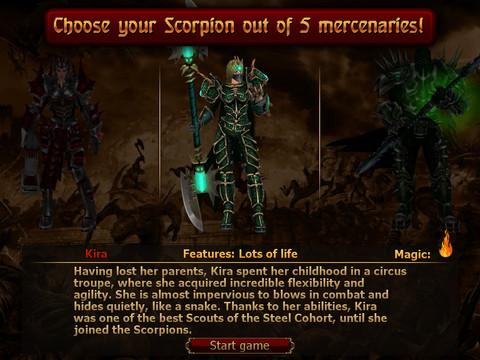 One of the biggest problems facing RPGs is the stagnation of turn-based combat. While it’s not something that ruins every game, it’s hard to deny that constantly clicking through a menu with limited interaction isn’t very engaging. Juggernaut: Revenge of Sovereign breaks through this mold with an overhand swing by creating a touch-based combat system that’s fun and surprisingly deep. Did I mention that it has great visuals and is free to play?

Your typical playthrough of Juggernaut: Revenge of Sovereign will look something a great deal like Infinity Blade. You’re seeking to destroy a great force of destruction (Sovering, Demon of Grief), but you have to battle through waves of enemies in one-on-one combat to get to him. Unlike your typical RPG, gameplay puts a high emphasis on combat and a low emphasis on story.

Your journey begins by choosing one of five unique heroes. Each one brings a different skill, elemental affinity, and weapon. Whether you want to pound your way through with Ursula’s war hammer or fry your foes with Torus’ magic, there’s a character that will fit your play style.

Each section of the game is divided into its own chapter of five to ten unique encounters. Every victory brings you experience, gold, and loot, while also bringing you another step closer to Sovereign.

Battles make complete use of the iOS touch screen, with directional swipes, taps, and motions determining your every action. Unlike traditional turn-based systems, Juggernaut: Revenge of Sovereign is constantly active, with character models striking and weaving throughout the battle. Every foe has a respectable set of combat animations, making each fight feel unique and dynamic.

Gameplay begins simply: a swipe of a finger attacks your enemy in the direction that you please. However, as the game presses on, the system gets pretty heavy. Certain blows will spill mana orbs from your target, which can be collected in order to unleash powerful magic attacks. Certain enemy attacks will expel rage orbs, which allow you to engage in a risk-reward system of combat bonuses. Some enemy attacks can be dodged by completing a quick-time event, such as tapping all of their magic orbs in time, or by successfully recreating a memory sequence.

It sounds like a lot to handle, but the game introduces each new element one-by-one in a tutorial that keeps things easy to understand. 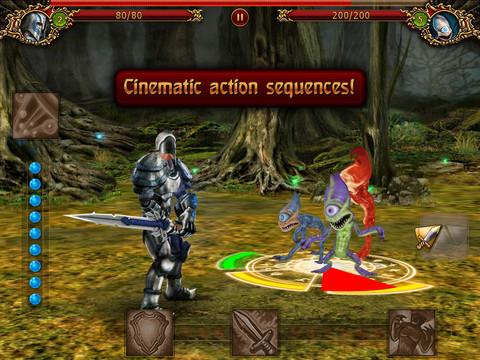 The only factor that I didn’t really enjoy was the game’s execution feature. Occasionally, enemies you fight can be expelled by a gory Mortal Kombat-style finishing move. Unlike Mortal Kombat, however, the move is mandatory, and rewards you with twice the amount of loot. For a game that really isn’t very violent otherwise, it’s a pretty strange mismatched aesthetic.

Aside from chapter combat, there are plenty of side quests at your disposal. Each completed area draws loyal citizens who pledge money to your cause. Occasionally, a monster will attack the citizens, giving you a chance to fend them off and keep your gold earnings high. Completed areas can also be scoured for treasure with scarabs, letting you earn large rewards of treasure and items through a lock-picking minigame.

Being a free-to-play game, there’s the usual pick of in-game and premium real-money currency. You can buy the game’s best items right away with real money if you want, but there’s no point if you want a decent challenge. I was able to play for several hours without having to invest a dime, and I was able to buy plenty of gear along the way with regular gold. 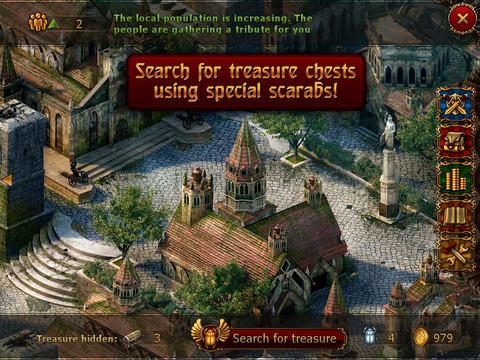 The problem, however, is that this system doesn’t last forever.

By the time that I had been stumped (at the final boss of chapter 4), there simply wasn’t enough gold available in order to power up without dropping real-life money. I’m not opposed to a system like this at all, especially after a game has let me play it for nearly half a dozen hours for free. Unfortunately, one quick look at the game’s shop had me looking the other way.

In my scenario, it would have cost me 1600 of the game’s premium currency in order to upgrade each of my eight pieces of armor. The cheapest way to get that much currency through microtransactions? A whopping twenty-three dollars. While I’m not sure that I would need an upgrade for all eight of my items in order to beat the boss that I’m stuck on, that is still a very steep price to climb.

Yet, despite the giant price hurdle, I really can’t complain too much. Juggernaut: Revenge of Sovereign looks great, plays great, and has plenty of different modes to keep a player occupied for a long time. While Mail.ru could likely have drawn several more hours from me with a more attractive premium system, I still loved the zero time I spent with it, and will likely be trying out a second character soon.

LostWinds2: Winter of the Melodias Review

Warlock: Master of the Arcane Review