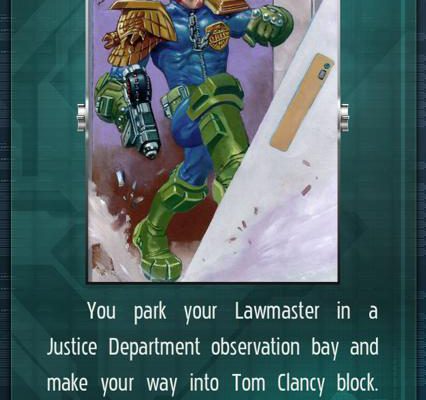 YOU ARE THE LAW!

I’ve never read 2000 A.D.  The only Judge Dredd product I’ve ever even really experienced is that god-awful Stallone movie from the early 90’s.  Despite this, I already feel like I get the franchise.  As a character, Judge Dredd feels as universally understood to me as Dracula or Batman – you don’t need to have read their canon to know what they’re all about.  With this in mind, I feel pretty confident in saying that Countdown Sector 106 is exactly the sort of game that Judge Dredd fans will love.

I’ve made no secret of my fandom for Tin Man Games’ Gamebook Adventures series.  I like reading, I like role-playing, and the GA games offer up a terrific blend of the two.  Now, for the first time, the team behind those games has applied the same engine to a licensed product – but don’t think that means that Countdown Sector 106 is just a GA game with a fresh coat of paint.  Along with the license, Tin Man Games have introduced a number of tweaks and changes to the formula – all of which are for the better. 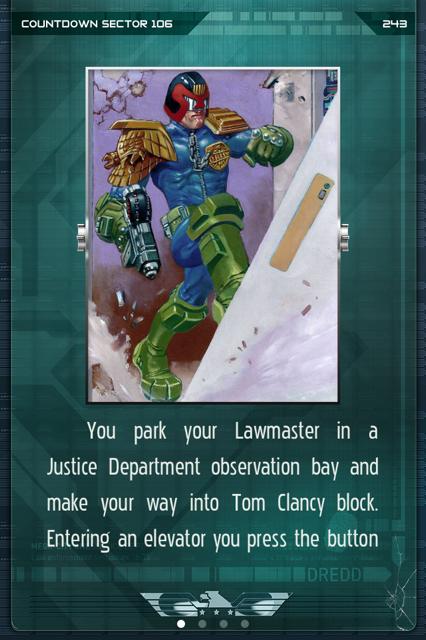 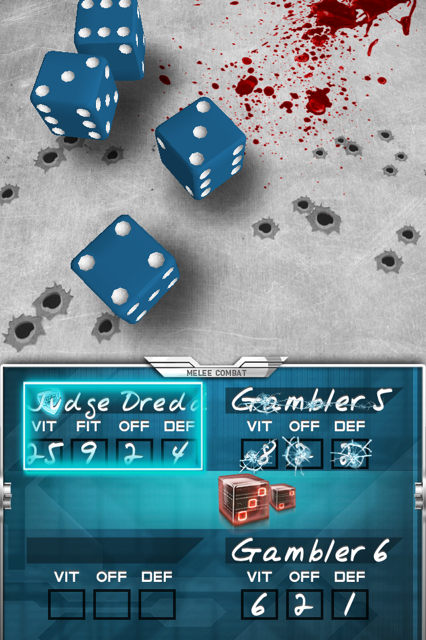 What most notably sets Countdown Sector 106 apart from previous Gamebook Adventures – asides from being set in the Judge Dredd universe – is how the story unfolds.  Previous games have always tried to tell something of a linear story (albeit with branching paths and plenty of choice for readers).  In other words, there always seemed to be a definitive goal for the player to accomplish.  There was a clear objective you were working towards.  Countdown Sector 106 is a little different.

The story doesn’t unfold so much as it is told entirely through you decisions.  Players are given full control of a night in the life of Judge Dredd.  You could find yourself squaring off against a giant alien kitty, getting into a scrap with some city workers and their obedient robot, or spending some time sipping tea with a sweet old lady who’s buried her husband inside the walls.  It’s all up to you – but like a “real” night of lawgiving, individual cases rarely affect the bigger picture.

There’s a chance that some readers may be turned off by this change, but honestly, I found it to be a nice break from the “tied to unravelling the mystery” nature of the genre.  That’s not to say that a grander mystery isn’t taking place in the background – the “juves” you bust are frequently found with devices that play clips of Dredd’s voice and have a suspicious countdown on them – but the majority of reading that takes place is focussed on individual crimes rather than driving the plot forward.

As a bonus, this new style really ups the replay factor, as each perp you bust gets added to a “rap sheet.”  You’ll have to read through it a few times if you want to find and bust everyone, getting that list to 100%.  There are also 79 achievements to unlock, so if you’re a completionist, you’re going to want to walk every square inch of Mega City One terrain. 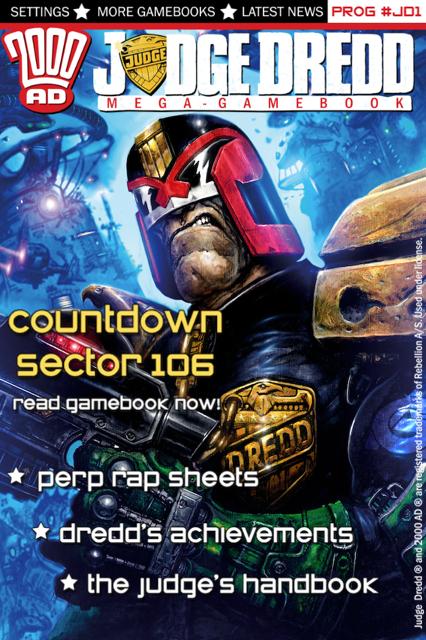 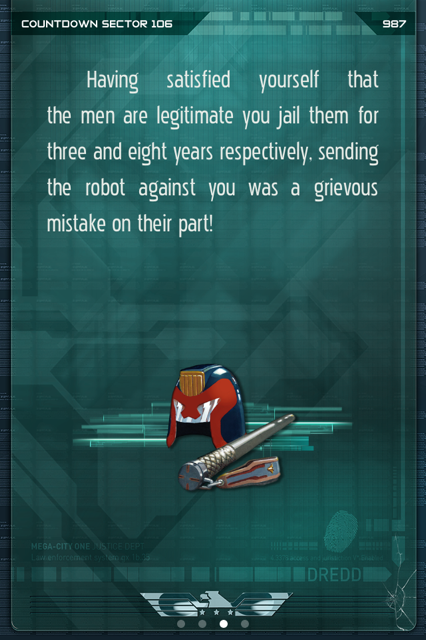 Other changes to the GA formula may be less noticeable, but they’re all welcome.  Random rolls now play a bigger part in determining the outcome of certain situations (rolling 2-6 has one result, 6-10 another, and 11-12 another, for example).  And combat now comes in both shooting and melee styles, with each handled by a different mechanic.  Melee is classic GA-style combat, but shooting requires you to roll over a certain number (part of which is based on your skill with your “Lawgiver” pistol, part on the difficulty of the situation).  Similarly, how well perps listen to you is based entirely on rolls of your authority skill.

Mechanics like this are going to feel familiar to GA veterans, but they’re implemented so well here (being spread out across different skills and scenario) that it never feels repetitive or dull.  No matter what quagmire Dredd finds himself in, there’s going to be a relevant roll that helps determine your fate.

Presentation in Countdown Sector 106 is pretty great, too.  The art is gorgeous and paints a great visual for the action that’s unfolding, the music is fitting, and even little touches – like how the page turning animation is a futuristic light-wand thing, or how the cover looks like an issue of 2000 A.D. – all come together to offer up a really tight package.  As far as style goes, this might be Tin Man’s sharpest gamebook yet.

And while I wouldn’t ever suspect this to happen, Countdown Sector 106 is the first gamebook I’ve ever read that feels like it’s rife with DLC potential.  Because of the “crimes as they happen” nature of the game, you could easily add more incidents into the mix for Dredd to bring the law to.  Again – I wouldn’t expect this to happen – but just knowing that the thought crossed my mind should give you some understanding of how different this gamebook is from past Tin Man releases.

If bringing the law to the denizens of an ultra-violent future city isn’t your thing, Countdown Sector 106 probably isn’t the gamebook for you.  For everyone else, this is an absolute blast to read. With their latest release, Tin Man Games have proven that they can handle existing characters just as well as they do heroes of their own creation.  Do yourself a favor – quit reading my words and start reading theirs.