Home / Reviews / Journey to the Center of the Moon Review

Journey to the Center of the Moon Review 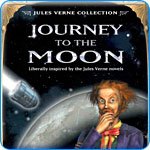 Science fiction isn’t particularly well represented in the adventure game genre, so Journey to the Center of the Moon is a welcome change of pace. But while it starts out very promising, and provides an enticing world to explore, it unfortunately gets bogged down in some truly frustrating puzzles that spoil the entire experience.

Loosely based on the works of renowned sci-fi author Jules Verne, Journey to the Center of the Moon tells the story of Michel Arden, a scientist who is travelling to the moon in a giant shell shot out of a giant cannon. Arden awakes before he reaches his final destination, only to find that his two travel companions have both died mysteriously. He vows to discover just what happened on the journey — despite the fact that the only witness to the crime was a chicken — and along the way discovers the secrets of an ancient Lunar civilization.

The major focus of the game is puzzle solving. From the very beginning Arden is forced to rely on his wits to survive, using the items around him to land the craft safely and set about his journey. This trend continues on the surface, where players must use the scientific methods of observation and deduction to access new areas and deal with the locals.

The puzzles are time consuming, and may require players to break out the old pen and paper, but they aren’t overly hard. That is, until Arden eventually makes it into the center of the moon, which is inhabited by a society of very intelligent aliens who don’t think too highly of humans. At this point the difficultly level jumps dramatically, as Arden is forced to prove his mental prowess by learning how to both speak and write an alien language, both of which are extremely tough to do.

The difficulty of the puzzles is intensified by the inventory system in the game. As opposed to the majority of adventure games, which give players only a few items at a time to work with, Journey to the Center of the Moon is loaded with usable items. So many in fact, that you’re given numerous pages just to house them all. On top of that, the game doesn’t organize them at all, so it’s completely up to you to keep your pack in order. This makes the entire process of using and combining items that much more difficult.

There are also a few timed sequences thrown in for good measure. But while these sections — which require you to complete a specific goal within an allotted period of time — don’t give you much time to figure out just what it is you’re supposed to be doing, they are very forgiving, allowing you to start right where you left off should you fail.

The most enjoyable aspect of the game though, is the exploration. When Arden lands on the moon he finds a truly bizarre but captivating world, filled with brightly colored plant life, strange creatures, and even stranger machines. It really feels like you’re discovering an alien world. And this is aided a great deal by the wonderful, detailed visuals that help bring the world to life. Things get a little less interesting towards the end of the game when Arden is stuck in the rocky core of the moon, but for the most part the exploration is a joy.

Aside from the regular gameplay visuals, Journey also oozes style through it’s hand-drawn cut scenes. These take the form of comic book style stills, which look charmingly as if they were ripped right out of an early twentieth century newspaper. Combined with a great voice over detailing all of the necessary bits of story, these brief sequences go a long way towards setting the tone for the game.

It’s a shame that the latter portions of Journey to the Center of the Moon are so difficult, because they mar what is otherwise a terrific experience. From its unique premise, to its wonderfully atmospheric game world that should come as a breath of fresh air to those who are bored with the more well-worn adventure game settings. Unfortunately most gamers probably won’t see it all due to some of the more frustrating challenges.

For similar games try Drawn: The Painted Tower, Chronicles of Mystery: The Scorpio Ritual, and Paradise.