Home / Reviews / Journey to the Center of the Earth Review

Journey to the Center of the Earth Review 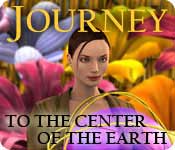 Inspired by pioneering science fiction author Jules Verne’s novel of the same name, Journey to the Center of the Earth is a point-and-click adventure that explores Verne’s world through the present-day point of view of a photojournalist named Ariane. Although the story is new, the game has all usual trappings that you’d expect from an adventure game – including the ones that can make them absolutely infuriating.

Ariane is en route to a photo shoot in Iceland when her helicopter is destroyed in an accident and she stumbles into a strange subterranean world populated by giant plants, prehistoric creatures like dinosaurs and pterodactyls, and an isolated colony of settlers that have descended from the leaders of the original expedition to the “center of the Earth.”

You don’t have to be familiar with Verne’s novel to “get” the game, but it does contain numerous references to characters and plot points of the novel while at the same time spinning off in a new direction. Ariane’s main concern is with finding her way back home, but she soon becomes caught up in the intrigues and mysteries surrounding the underground colony, which seems to be following a timeline that’s somehow two years ahead of the one she left behind.

Gameplay is typical point-and-click. As Ariane moves through the world screen by screen, you can make her interact with various things in her environment by clicking on it with a mouse – the cursor changes shape to let you know if an object is “clickable” when you run the mouse over it. You can also select an item from Ariane’s inventory to use on the environment – such as using a machete to cut down the foliage that’s blocking her path.

Like most point-and-click games, Journey to the Center of the Earth has plenty of intriguing puzzles but also some obscure and frustrating ones. Sometimes you are only allowed to pick up an object if you’ve performed a specific set of actions prior to that. Other puzzles involve combining unlikely items from the inventory to create new items. Sometimes the cursor will show that you can click on something, but nothing happens, and the game isn’t always clear about why something isn’t working and what you should be trying instead.

If you become stuck, it’s often because you forgot to pick up a key item somewhere along the way and you have to backtrack through the environments to search for what you could have overlooked. Furthermore, walking from screen to screen can be bothersome because you may only click on a specific small area at the edge of the screen to get the footprints that indicate you can walk that way. Sometimes the footprints appear but nothing happens when you click on them.

These various issues are guaranteed to have you running to a walkthrough at some point – luckily, there are numerous free walkthroughs posted online to choose from. (Keep in mind when reading these, however, that the downloadable version of Journey to the Center of the Earth is slightly different than the PC retail version so the walkthroughs aren’t 100 percent accurate.)

In spite of its issues, Journey to the Center of the Earth has its strengths too. Its production values could be considered above average for a casual game, with cinematic cutscenes occurring every so often to advance the story, atmospheric sound effects such as the lapping of water on a beach or the crunching of Ariadne’s feet on the gravel as she walks. Dialogue is presented in voice-overs (as well as text) so you can actually hear them talking to each other.

Journey to the Center of the Earth is an uneven game, but for adventure game fans starved for content it certainly provides an interesting story and some mind-bending puzzles to get your head around.