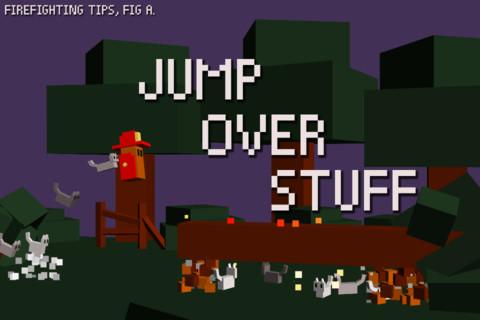 Jones may be the best non-fire-fighting firefighter the world has ever known.

Gamers have received a lot of imperatives over the years: the empire is evil and must be stopped, this threat to the galaxy needs to be obliterated, shoot everything that moves.  But none is so simple, so noble, as Jones on Fire‘s single sentence tagline: “Kitties are cute and should be saved.”

As Emma Jones, member of the Meow Squad and firefighter extraordinaire, you understand this mantra better than most.  You’re willing to risk life, limb, and severe burn blisters in order to save as many fire-lorn felines as you can.  Night after night, Jones runs through the endless blazes of the woods outside her fire station-turned-cat sanctuary, dodging active flames and fallen trees with her cluster of furry rescues close behind.

Jones has been training for this all her life.  Not only can she run the entire length of the woods without stopping, but she’s skilled at jumping over raging fires, charging under fallen logs, and outrunning even the endless blaze that’s engulfing everything behind her.  With a little extra training, Jones is able to pull off expert skills like jumping while charging, charging mid-air, or even super-jumping over the tallest obstacles in her path.

All of these abilities come in handy for both dodging dangers and collecting stranded cats. Although many kitties have found a way to miraculously float in mid-air, quite a few are hiding under bushes or logs, which Jones will need to charge beneath to rescue.  Every cat that Jones manages to snag on a run will be added to her kitty total, also acting as a supportive currency for purchasing the aforementioned abilities and other useful items.

Although Jones could run forever, powered by a love of cats, her rescue missions are split into roughly one-minute long sprints that increase in difficulty each time she makes it from start to finish.  Jones begins the game able to stumble once before the all-consuming fire catches up to and consumes one of her three lives upon the next falter.  She can purchase additional hit points as well as the “outrun the fire” ability, which lets her run just ahead of the fire until she regenerates one HP.  Each run completed increases the “hazard level” by one, adding more—and harder—obstacles to the next run, lengthening it slightly, shifting the camera angle, and upping the speed with which Jones travels.

Moving up two hazard levels also increases her run multiplier, earning more of the only method of score-keeping in Jones on Fire: kitties.  Standard gray and white kitties award “K,” while the rarer gold kitties—between one to three show up per run—award “GK.”  K can be used to purchase pre-level “super boosters” that offer a one-time bonus, like starting with an extra hit point or the “catnip” power-up, which draws kitties to Jones like a magnet.  The more desirable GK is used for most other permanent purchases, including abilities like multi-jumping and outrunning the fire faster, as well as pickups strewn about the level like first-aid kits that refill health, the “kitty’s blessing” that makes Jones invincible for a short period, and collectible catnip for random kitty magnetism.  GK can also be purchased separately with real cash, although Jones on Fire‘s pricing model allows for the first two levels of upgrades to be bought without spending cash—most items cost from 20GK to 75GK—with the third, strongest level of upgrades jumping to the pricier 500GK range.  This might encourage spending a few real dollars for completion’s sake, but most of the upgrades are useful enough without being maxed out that there’s never a need to open your faux fur-lined wallet. 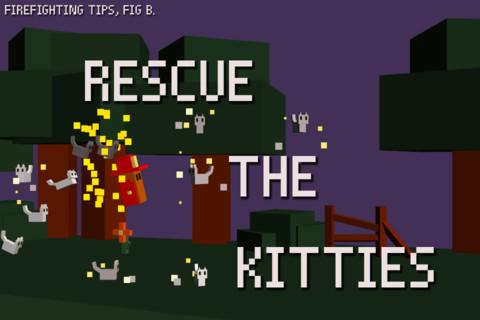 With or without upgrades, the difficulty in Jones on Fire is a balanced mix of modern leniency and retro ruthlessness.  The use of hit points instead of instant death upon stumbling, as well as the three-life system (nine if you purchase the “Nine Lives” upgrade), and the option to spend GK for a continue even after using up your lives all allow for a lot of mistakes with little punishment.  But the challenge of older platformers is still present, with stumps knocking Jones backwards instead of forward, and higher hazard levels placing obstacles so close together that a single misstep at even max health can end up trapping Jones in a painful loop, bouncing between hazards to her death.  The fact that levels reset upon death provides both a potential reprieve from problem obstacles, but also prevents learning and preparing for their placement à la Mega Man.

Even upon losing all your lives and resetting the hazard level, though, you get to keep every kitty you earned on the previous runs, at the current hazard’s multiplied rate.  Additionally, Jones is so responsive—able to jump or charge the instant her last action is complete—that even failing on harder levels still feels like your own fault, not the game’s.  Couple that with the adorable kitties who celebrate your success with fireworks, the blocky retro graphics that make even an overflowing litter box endearing, and the chiptune soundtrack that is charged with enthusiasm for kitty-rescuing, and Jones on Fire is an excellent automatic runner pick-me-up for the feline at heart.