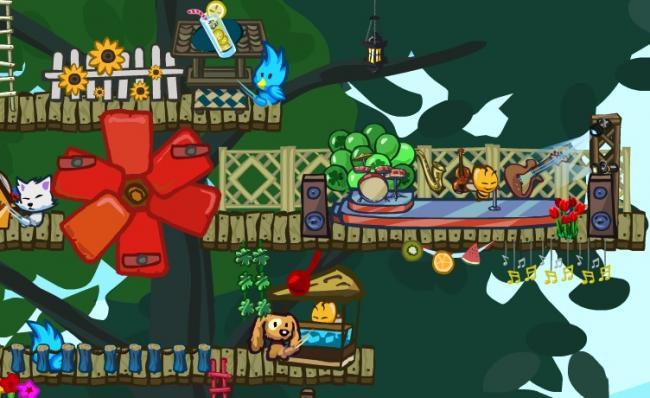 JollyWood isn’t quite the treehouse of your childhood dreams

A treehouse is usually a place of escape; a little hideaway where a kid can get away for a bit and pretend theye’re somewhere else, somewhere more exciting. The treehouses in JollyWood are what you imagined while on those childhood escapes. They’re fantastic places filled with amusement park rides and arcade machines and cute little animals. It’s a great concept for a game, but the execution is off. JollyWood is certainly enjoyable, but the core gameplay is incredibly derivative. It’s not the place of fantasy and excitement that you might be hoping for.

You play as a tiny animal (you’ll be able to choose your avatar in beginning) and your job is to build the craziest treehouse possible. The main conceit of the game is that you’re constantly building up, expanding your amusement-park like treehouse up to the furthest branches of a gigantic tree. This also means that placing items is a little trickier than in other, comparable games, because the pieces will need to connect properly or else they’ll be useless.

There’s all manner of attractions to place in your treehouse, like arcade machines and treat stands, and the various connectors are likewise fun. Though you’ll start with simple ladders, eventually you can work your way up to crazy slides, wheels, and elevators to connect the different parts of your tree.

The building portion is fun, though the attractions tend to be overly expensive, but the rest of the experience doesn’t hold up quite so well. You’ll need to return to collect money, which comes in the form of leaves, from the different attractions, and some of them will also need to be restocked, as well. In some ways it feels a lot like Ravenwood Fair. The problem is that there’s such little else to do. You can visit your friends’ trees, of course, and perform the now-standard five actions to help them out, but that’s about it. 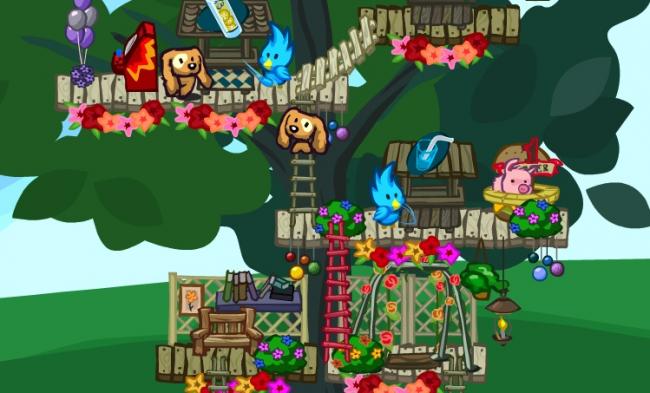 In spite of these problems, JollyWood may still be able to hook you through sheer charm: everything is just so darn cute. And not just the cartoon animals, but the whole world feels bright and vibrant, with an upbeat soundtrack to match. The flat visual style doesn’t really look like anything else on Facebook, which initially makes JollyWood feel somewhat unique.

But that feeling doesn’t last long. it’s not that JollyWood is a bad game, because it’s certainly competent in design and charming in presentation. It just feels far too formulaic and lacking in content. This may change with future updates, but as it stands JollyWood isn’t quite the treehouse of your childhood dreams.