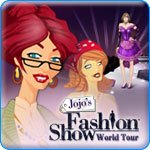 True classics never go out of style; they just get better with time. Happily, the same can be said for the Jojo’s Fashion Show series. Jojo‘s Fashion Show World Tour is the crème de la crème of time management games, surpassing the previous games in its depth of game play and creative possibilities. With dozens of new twists, hours of game play, and real up-to-date fashions, even the most unfashionable players will be bitten by the fashion bug.

When the game begins, we learn that Jojo’s daughter Rosalinda is all grown up and in charge of her very own fashion line. That leaves Jojo with the frustrating task of replacing her and finding a new assistant. After interviewing some hopeless candidates, she finally settles on a young woman named Haley. What Jojo doesn’t know is that Haley has designs on trashing Jojo’s career… and on stealing Rosalind’s boyfriend.

The core gameplay is simple to learn, but challenging to master. You have three models, each with a style listed over their head. Most of the time, you work with female models, but occasionally you get to dress male models too. Your job is to mix and match outfits to meet the demands of each style. You’re timed, so going too slow means sending a model on the runway in her underwear – what a fashion disaster! The better you meet the demands of the style, the more you points you can earn, and the more successful your show will be.

The greatest change in this game and the previous games would have to be the feedback system. You are shown precisely what attributes you need to include, so there’s very little guessing involved.

The game features real styles, being worn in the real fashion world, so it’s much more realistic than most other fashion games. You can expect to work with styles like Gothic Loli (think Little Bo Peep at a funeral), Bold Betawi (influenced by the styles of indigenous people from Jakarta), Sophisticated Bride, Copacabana (beach wear), and Royal Casual (military preppy), just to name a few. In addition to these popular styles, you also get to work with local “street” styles that are actually popular in each region. If you want to know what’s hot in Tokyo, Jakarta, Amsterdam, or Rio, play the game and you’ll learn!

There are several familiar power ups to make your job easier. You can buy more time with the dazzle power-up, make your outfits more valuable with the supermodel power-up, and get a rack of new clothes with the useful shuffle power-up. There are also matching outfit and swap style buttons, to help you out of a jam. In addition to the power-ups, you get accessories you can add to make your outfits more valuable, and the occasional full outfit on the side to help you go faster. With all these features, the strategy is through the roof.

In a new twist, players can also design their own original outfits for each style in the game. Just as in the main play mode, styles have numerous attributes, so you want to try and fill as many as possible. It’s virtually impossible to get them all, so do the best you can. Each outfit includes a top, a bottom, and shoes. For each item you get to select the base, and then colorize it by picking the fabric pattern, followed by the main, pattern, and accent colors.

You get immediate feedback as you create your masterpiece, and can see how many of the criteria you’ve met. You can go back and edit these later at any time, but you only get to save one for each style. As a bonus, you get to use each of these custom outfits once per runway level, which is really helpful when you’re running out of time and want a high scoring ringer.

The hip music and applause of the crowd make it feel like you’re really at a fashion show. Once you start playing, it’s very hard to stop. With so many styles, the game play stays fresh even after hours and hours. By my estimate there’s at least 12 hours of game play, not counting the replay value.

The graphics are eye-catching, and the atmosphere is exciting. I kept drawing a crowd over my shoulder as I played, and my daughter is anxiously waiting for me to finish writing this review so that she gets a turn.

Of course, it’s not completely perfect. It can be difficult to remember all the details of each style, especially the local “street” styles. You’re eased into each style with one round of singlular style gameplay, and you can click over a model’s head to see the criteria, but since you’re timed and the pace is fast, this isn’t always an option. Adding and removing accessories and power-ups isn’t always smooth, and sometimes results in unintentionally removing clothes from a model. Also, when it comes to designing outfits, it is sometimes unclear what the criteria mean and what designs will qualify, like bold patterns for example. These are small points, though.

In a nutshell, Jojo’s Fashion Show World Tour is incredibly cool. It’s impossible to put down, with great production values and a completely engaging fashion theme. If you’re looking for a time management game with real fashion and lots of excitement, this is one game you shouldn’t miss.