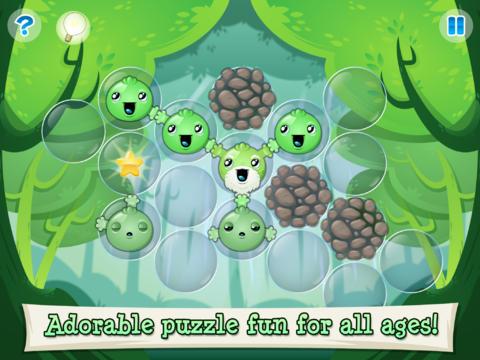 Joining Hands 2 is a cute little logic-based puzzle game that will keep small hands busy with Peablins and their many cousins, who are only happy when they’re holding hands. Adult hands, however, might find it a little too simplistic and two-dimensional to stay interesting for very long.

Life is good when you’re a Peablin. As long as you’re holding hands with someone, you’re happy! There’s only one complication: some Peablins have one hand, some have two, some have three or four or five, and if even just one hand isn’t being held, it’s frownie-face time. So sad! All you have to do, then, is arrange the Peablins on a small, two-dimensional board in such a way as to ensure that everyone’s hands are being held and no one is feeling lonely.

Oh, but it’s not quite that easy – is it ever? Most levels will also contain one or two stars, which can be collected by simply having a Peablin on its spot when the level is complete. You can finish a level without collecting the stars, but what fun is that? Complications deepen as you get further into the game and meet other kinds of Peablins: Grandlins, Starblins, Brufflins, Meeklins and more, each with its own unique quirk that makes it a little trickier to deal with than the happily glad-handing Common Peablins. Grandlins, for instance, are too old to bend their arms, and they’re also insistent on having their long, white beards held as well, while Meeklins are shy and will hide their faces (and their arms) if they’re surrounded by too many other Peablins.

Joining Hands 2 is a fairly easy game, essentially a repeat of the original Joining Hands, although it can get tricky in the later stages when you’re dealing with three or four (or more) different types of Peablins at once, each with its own physical or psychological hang-up. When you do get stuck (and sooner or later, you will) a help function will guide you to victory by indicating where the Peablins should be placed. Hints come one move at a time so you’ll only get as much nudging as you need, and the hint timer refreshes very quickly, eliminating long waits for those times when you’re really stuck. There’s no penalty for using hints or bonuses for finishing quickly, so you can take as long as you need to finish a level and make as many moves, and use as many hints, as you want. There are also achievements for finishing levels and collecting stars that betray the family-friendly nature of the game with names like “A New Friend From Far, Far Away” and “It’s Okay To Be Shy.” 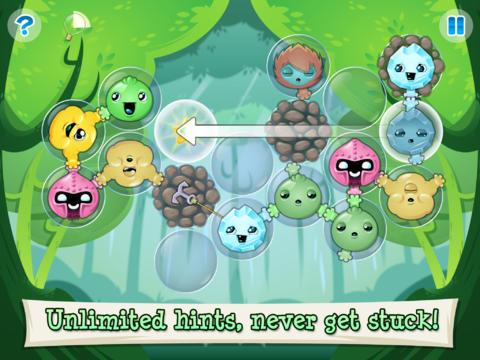 It’s also a good looking game in a simple sort of way, with plenty of bright colors and cute animations, nicely backed by gentle, soothing melodies, ambient forest sounds, and the cooing and gurgling of the Peablins, which reminds me of nothing so much as the Teletubbies and is sometimes almost too sweet to bear. The drag-and-drop controls are very simple but not always terribly precise, and it’s a bit too easy to drop a Peablin on the wrong spot if you’re not careful – at least if you’re playing with full-grown man fingers on an iPhone. Your mileage may vary.

It’s all very well put together, and my only real complaint is that it failed to hold my interest. There’s virtually nothing to it beyond the puzzles themselves, and it wasn’t until I’d played through more than 100 of them that I began to feel anything resembling a consistent degree of challenge. It’s the same thing, over and over again, and while I’m not a fan of excessively punitive games, the complete lack of any impetus or measure of success beyond whether or not a level is complete is unsatisfying. 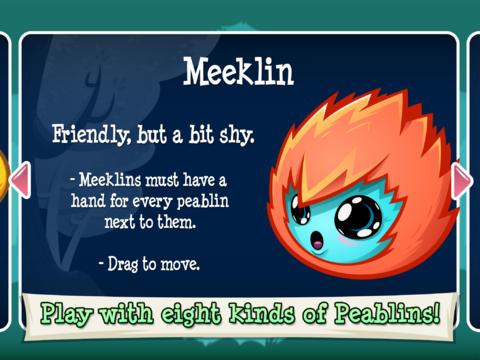 At its core, Joining Hands 2 is another round – well, 140+ rounds – of Joining Hands. It’s endearingly cute, easy to play, and won’t demand any more of your time and attention than you want to give it. But I think it’s also best suited for younger gamers, who might get a little more zing out of the puzzles – and the babblin’ Peablins.