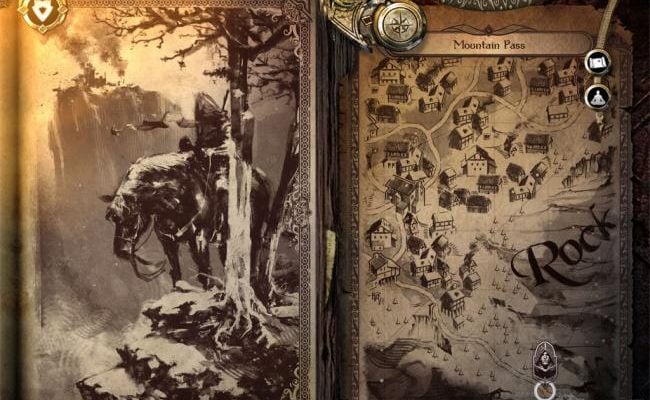 A brilliant evolution of gamebooks that fumbles

Joe Dever’s Lone Wolf comes so terribly close to getting it right. And not just right, but perfect. When I first started playing I thought I’d discovered a new pinnacle in beautiful, exciting and interactive gamebooks. And then it all fell apart, and by the time it was over I was glad to see it done.

If you like gamebooks (and probably even if you don’t), the opening of Joe Dever’s Lone Wolf will blow you away. It hits you right from the get-go with a gorgeous, subtly animated pen-and-ink style of illustration and a rich, urgent orchestral soundtrack. And choice! Lone Wolf is a well-established character with 28 gamebooks to his credit (the analog, dead-tree kind of gamebook, of course) but before the action begins you can customize your version of him to a surprising degree. Are you the stealthy type, or do you prefer a stand-up fight? Do you pay close attention to you surroundings with every step you take, or do you prefer to rely on intuition to see you through? You can build Lone Wolf into just about any kind of character you want, from a brain-smashing tank to a quiet, thoughtful diplomat. 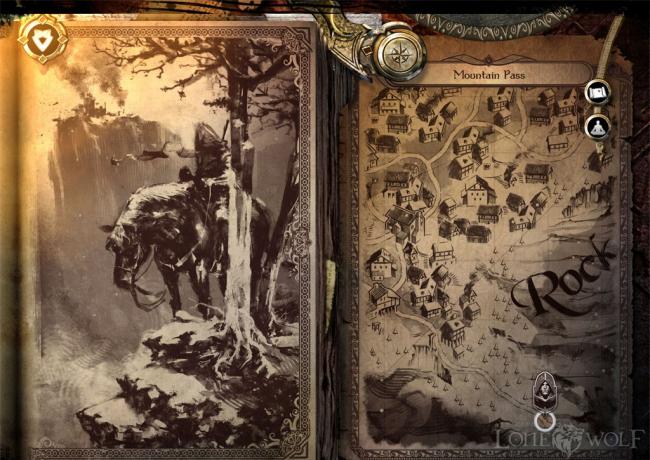 The game shows off a remarkable degree of interactivity once the action starts. Multiple choices need to be made (as with any gamebook), but skill in the form of manual dexterity is also vital. Picking locks, for instance, isn’t simply a matter of looking at a stat and rolling some virtual dice; you’ll have to use a lockpicking tool and a small dagger to work the lock open, and if you break all your tools, it’s tough luck for you.

Your attributes increase based on the skills you use, both in and out of combat, so kicking down doors will boost your strength when you level up at the end of each chapter, while taking the time to observe your surroundings will sharpen your intelligence. Combat is also skill-oriented, and you’ll have to nail some pretty tough quicktime events to successfully pull off special attacks.

In fact, I’d go so far as to say that Lone Wolf is more akin to a full-on RPG than a gamebook. It boasts a paper-doll inventory, a full character sheet, a journal and codex, a world map and eventually, a merchant where you can buy, sell, repair and even craft items. It’s all lovingly molded into a hybrid game that blurs the line between RPG and gamebook, and it does it with such easy elegance that it’s almost possible to overlook its one grand failing. Almost – but not quite. 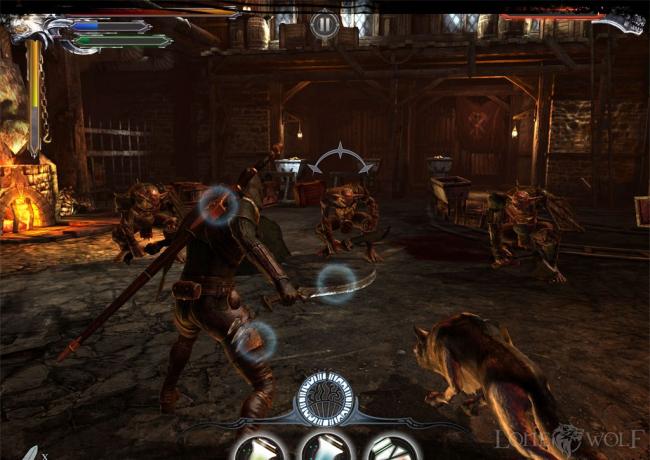 The combat, as mentioned, is skill-based, and it will appear spectacularly cool the first time you get into a fight. Lone Wolf literally steps out of his medieval style of illustration into an animated, full-color RPG battle scene as he squares off against his enemies. You’ll tap the screen, sometimes in a rapid frenzy and sometimes to split-second timing, and swipe left, right and around in loops; you’ll choose quick, heavy or combo attacks, bash enemies with your shield, throw daggers, drink potions and cast magical spells, while the screen flashes and enemies roar and the music washes around you. You can even pull of deadly finishing moves if you’re quick enough, and the first time you kill an enemy Giak – essentially a demonic cross between a Peter Jackson goblin and Jar-Jar Binks – it will be awesome.

And then it will happen again. And again. And again. And before long you’ll start to notice that you’re spending an awful lot of your time fighting, and that the story that seemed so promising during your approach to the devastated village of Rockstarn is really just a thin excuse to string together battle after battle. With healing potions in short supply until you find the merchant (which happens fairly near the end of the game, and can be missed entirely) it can also quickly devolve into an exercise in frustration, as you replay the same fight over and over again until you get it right. And if you happen to have slow hands, or just aren’t very good at QTEs for whatever reason? You’re probably hosed. 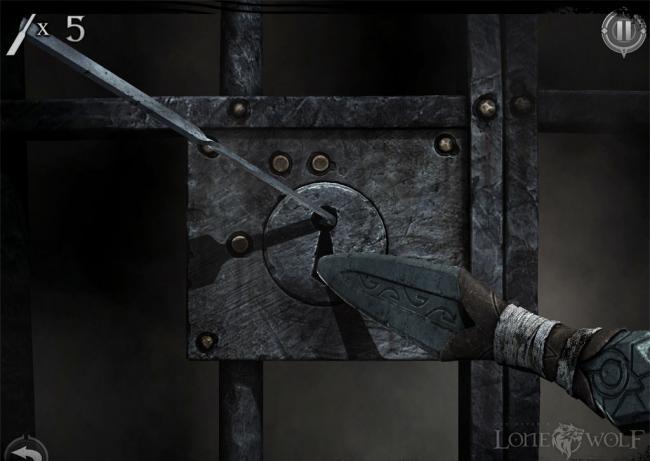 It’s not entirely unforgiving; after you die, you have the option to retry the fight at a lower difficulty level with lesser rewards for victory, but near the end of the game and particularly in the final, two-part combat sequence, it can still be a mighty struggle to get through. It took me a full half-hour to beat the final fight, and it’s not nearly interesting enough for any more than a minute or two of that time to count as “fun.”

Making a stealthy character has no apparent benefit in combat, as combat sequences appear exactly the same whether you approach an enemy head-on or attack them when their backs are turned. And unlike certain other gamebooks, there’s no “rewind” option. You can go back to the most recently saved checkpoint, but no farther, so if you chose poorly three moves ago and find yourself stuck, you’re beat. This also takes most exploration and experimentation of the table; if you want to step back and see what happens if you opt to go to the boiler rather than the sheriff’s office, you’ll have to replay the entire game.

It starts off superbly, with the promise of a dark, mature fantasy tale wrapped up in an utterly stunning multimedia package, but once you get into the meat of the story it becomes little more than a succession of dull, often-annoying combat sequences. This is only the first of a planned four acts so the narrative could very well pick up, but unless improvements are made to the combat as well – which is to say, cut it way back and perhaps even implement an easy mode for gamers who’d rather read the story than struggle with QTEs – it won’t make much difference. Joe Dever’s Lone Wolf comes so very close to success, and yet remains disappointingly far away.