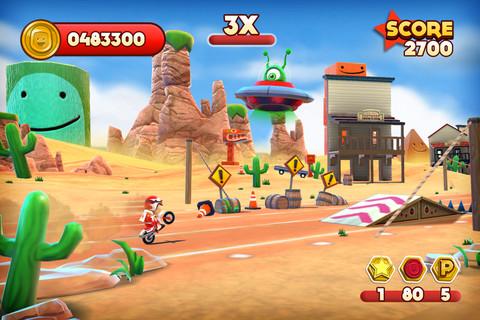 Meet Joe Danger. He’s that big-nosed daredevil in the red unitard, and the star of his own popular physics-based racing game. Joe Danger rose to fame on the Playstation Network in 2010, and now he’s bringing his death-defying stunts to the tiny screen in his first mobile outing: the very fun and impressive Joe Danger. And I’m not just saying that because we have the same name.

The biggest difference between Joe Danger and its console counterparts is that mobile Joe can move all on his own. While this does lessen the game’s difficulty to a certain extent, there are still plenty of other things to worry about as Joe speeds on down the track. Before long you’ll need to balance jumping, ducking, switching tracks, popping wheelies, and pulling off tricks in mid-air with perfect timing, all while tapping on collectables that fly across the screen.

The single tap and touch-and-hold controls feel great, but sometimes their simplicity can get in the way of what you want Joe to do. This becomes most apparent in situations where you’re trying to tap on a collectable, and Joe accidentally jumps into an overhang of spikes, or gets his rhythm thrown off and crashes into a hurdle. Pretty soon you’ll start to question why you can’t simultaneously tap on a collectable with one thumb, and make Joe jump with the other.

The main levels in Joe Danger are broken down into easy, medium, and hard designations, with new gameplay mechanics gradually added the further you progress. In each level, you’ll be given three objectives to complete before Joe crosses the finish line. These goals can range from collecting every coin on the track, to landing every stunt with perfect timing, and my personal favorite, tapping on the hidden six letters to spell out D-A-N-G-E-R. Complete all three in a single run, and you’ll earn a very elusive and mustachioed pro medal. You can win a gold trophy on each track by pulling off enough mid-air flips to build up your multiplier, and then there’s also the Hello Games emblem that’s cleverly hidden somewhere in each level, just waiting for you to find.

The graphics in Joe Danger rival those of Joe’s big screen adventures, with bright, vibrant colors and smooth character and level designs. The wonderful sense of humor remains intact, as players are introduced to Joe Danger’s wacky world of smiling, anthropomorphized landscapes, and rival motorcyclists that include a fedora-wearing chimp named Mr. Chuckles; the ever joyous Bobo the Bear; and of course Mr. Sprinkleman, a pink-frosted cupcake man with unnerving dead eyes. You’ll race against one of these colorful characters at the end of each level set, and can unlock them for your own personal use if you save up enough coins.

The bathroom-themed bonus stages are a great way to earn some extra coins, and they make for a nice distraction from the main gameplay elements. The bonus stages present a different kind of challenge, as Joe generally has an obstacle-free ride across the blue-tiled floor, and players have to pop dozens of coins that are floating around in soap bubbles. But of course, there’s a catch: if you want to replay a bonus stage, you’ll need to purchase a randomized character in order to access the level again in a different costume. It’s a fun way of encouraging players to purchase new characters, but sometimes the logic behind this can really work against you. For instance, I was one pro medal away from achieving 100% completion on my save file, when the last bonus stage I needed to replay randomly required me to purchase Golden Joe: the most expensive character in the game by a long shot. What should have been used as a fun diversion, instead completely halted my progress. 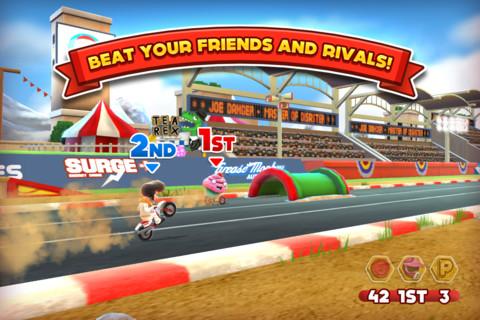 Joe Danger is an extremely polished and well-developed game, so I’m going to be nitpicky for a minute as I mention some cons. For as gorgeous as the graphics are in the game, there is a disappointing lack of variety in scenery, and a very anticlimactic final level. The desert and inferno-themed level sets don’t really look all that different from the tracks you start out on. I mean, there aren’t even any rings of fire to jump through! While a few stages will have your thumbs twitching at carpal tunnel-inducing speeds, most of the levels in Joe Danger are far from difficult. However, while this does shorten the gameplay experience to only three or four hours, it also leaves you with a good sense of accomplishment, as you can steadily progress through the game without too much of a hassle.

But in the end, if you have an appetite for fast bikes, funny characters, and all-around danger, then Joe Danger is definitely the game for you. Even though it feels a little barebones at times in comparison to its console version, the game’s incredible presentation more than makes up for it, as Joe Danger is short and sweet, and a must-have title for any fan of physics racers. For what Joe Danger sets out to do for mobile gamers, it does so marvelously.