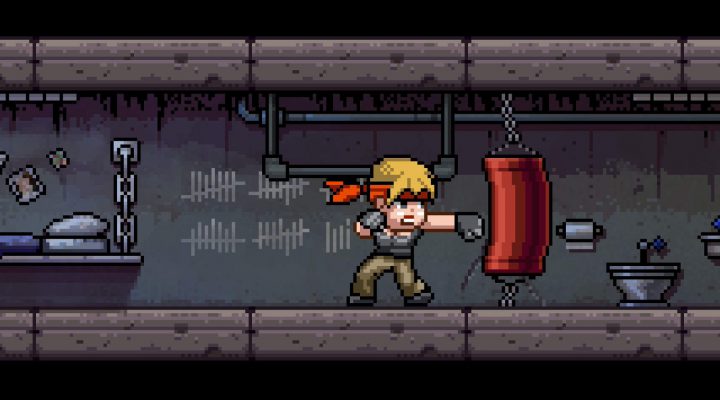 Can get a little repetitive.

Joan Mad Run is, for all intents and purposes, a three-lane auto runner. But — and this is a big but — it’s also an awful lot more than that.

It’s a gorgeous pixel art platformer with a gory heart and a level of challenge that would make even some of the twitchiest players grin. It’s a heart-on-sleeve throwback with a modern sensibility. And it has a freeze ray in it. Like, a real, genuine, smash-your-iced-over-foes-to-bits freeze ray.

Throw a razor compulsion loop over the top of all of that and you’re left with an endless runner that might not be super fresh, but is ridiculously fun. And sometimes you can’t ask more of a mobile game than that. 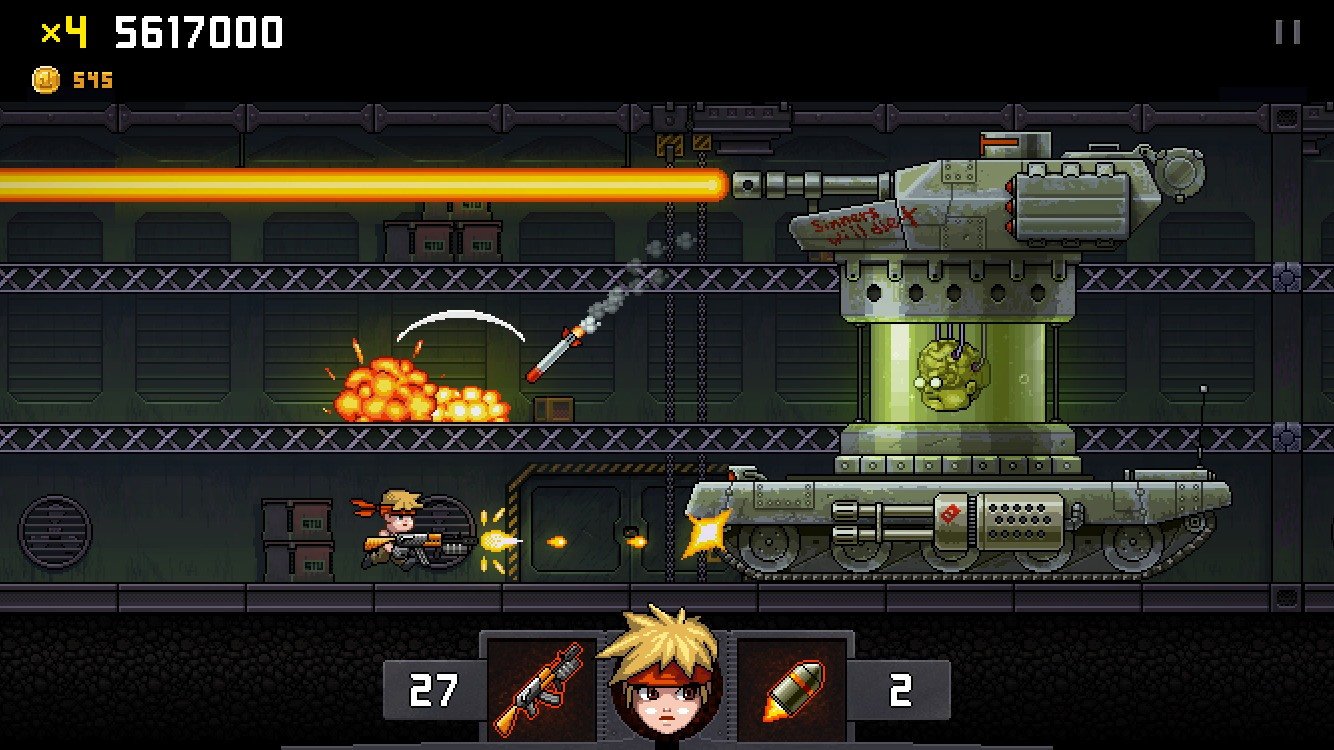 You play the titular Joan, a bandana-wearing, spiky haired, one woman war machine. At the start of each run you burst out of your room and into a three-tiered, dead straight avenue of enemies to slaughter, traps to avoid, and coins to collect.

The controls aren’t the most intuitive to start off with, but once you get used to them they’re really very sharp. There are laser beams to dodge, charging soldiers to get out of the way of, and spinning spiky cogs of death that would love nothing more than churning you into bloody mulch.

There are power-ups to help you though. From coin magnets that suck in nearby currency, to a Blood Lust boost that turns you into a red rage monster that’s invulnerable and fires gouts of flaming anger from its fists, grabbing them changes the complexion of the game. 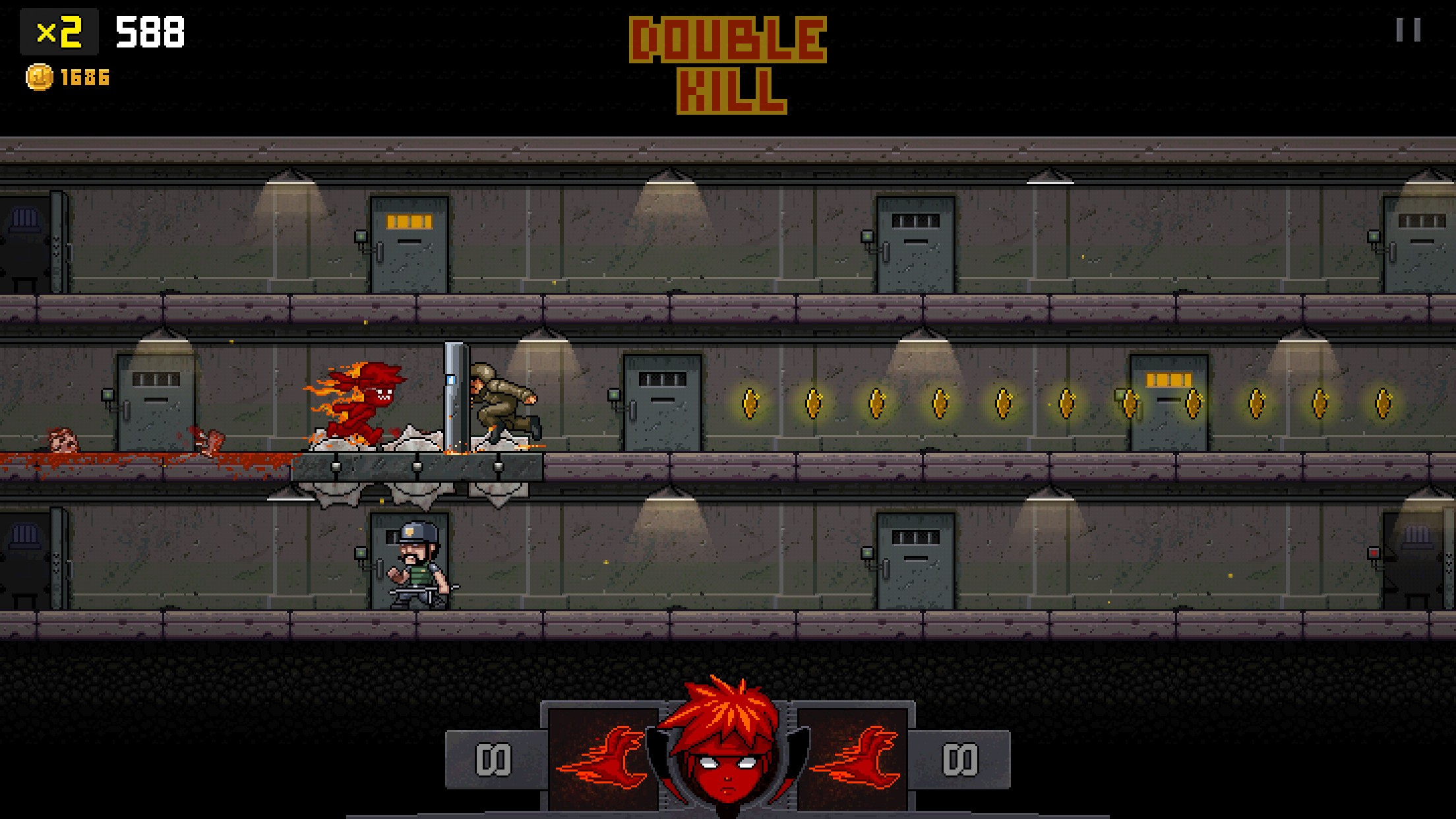 There are plenty of nod to the games of old here, from the art style to the portrait of Joan at the bottom of the screen that represents your health. Take a beating and it’ll show on Joan’s face, Doom-style.

But there are plenty of modern ideas too. From the bite-sized length of your runs to the randomly generated hazards you’ll come up against, Joan Mad Run borrows, twists, and reshapes concepts from a variety of genres to create something really exciting.

There are boss battles, magnificently silly weapons, and an ever-changing band of enemies for you to cut down to size. And you will, because cutting them down to size isn’t just fun, it’s a brilliantly engrossing challenge. Each time you fail you’ll want to jump back in for more.

And it’s that push to see more of what the game has to offer that makes Joan Mad Run so enticing. You’ll inch deeper into its linear depths, and find a new enemy type or a frightening new boss. And the second they kill you you’ll swear revenge and dive back in.

It’s only the very best arcade games that provoke that sort of response, that make you both deliriously angry and happy at the same time. And it’s testament to the design of the game that you never get mad at it, just at your fingers for failing you at an inopportune moment.

Joan Mad Run is an exciting blend of hyper violence, platforming nous, and pixel graphics. And if you like any of those things, it’s well worth sinking some time into.