Home / Reviews / Joan Jade and the Gates of Xibalba Review

Joan Jade and the Gates of Xibalba Review 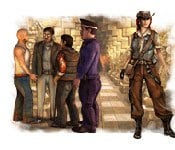 Stop me if you’ve heard any of this before. Some children have gone missing. Their mother rushes off to find them. She happens to be an intrepid explorer-type. Her search takes her into the heart of a South American jungle where she must investigate an ancient temple. Although the premise of Joan Jade and the Gates of Xibalba is interchangeable with dozens of other hidden object/adventure games, and its gameplay is thoroughly average, it’s at least easy on the eye and boasts some clever (if repetitive) puzzles.

The story opens with Joan rushing to the Yucatan to search for her children, Jim and Emily, who were volunteering at an excavation site but went missing during a storm. Frustrated by how slowly the local police force is taking to get a search party together, Joan – who’s no stranger to exploring – sets out to find her kids herself and ends up investigating a strange old temple nestled deep within the jungle.

Joan Jade combines elements of hidden object and adventure gameplay. You’ll spend most of your time picking up anything that looks important and adding it to your inventory, then figuring out how to use these items on your surroundings in order to gain access to the next area. One of the first things you’ll do, for example, is search base camp to find something to clear vegetation and a light source. You’ll also occasionally be able to zoom in on certain areas and enter a close-up hidden object search where you’ll search for random objects like a vase, hammer, arrowhead, or gloves.

Some areas are larger than one room, and you can move from one scene to the next by clicking on arrows that mark each exit. If you get stumped and need a clue about what to do next, you can click on a compass to receive a hint. The compass takes a minute to recharge.

Joan Jade and the Gates of Xibalba makes a good first impression, with bright cartoonish graphics reminiscent of the Samantha Swift series, well-designed scenes, not-horrible writing, and a handful of interesting – if not groundbreakingly original – mini-games, like sliding block, pipe fitting, spot-the-difference and memory matching puzzles. I enjoyed the way you were allowed to skip a mini-game after a certain amount of time had passed but would suffer the consequence of not being able to earn a trophy for beating it. (Ample incentive to stick around and try to figure the mini-game out rather than rush past it.)

The game starts to lose a bit of steam half way through its 3-4 hour playthrough time, though, as the temple interiors start to look similar to every other Mayan, Aztec or Incan-themed hidden object game you’ve ever played, and the mini-games start to repeat themselves. If I’m going to be asked to spot miniscule differences on fish, for example, the game could at least swap in different-looking fish for the second, third and fourth time around, or maybe even come up with some different animals altogether. The ending is abrupt and rather unsatisfying as well.

Joan Jade and the Gates of Xibalba is a pretty package and not a bad hidden object adventure, but ultimately comes up a little short on depth and staying power.