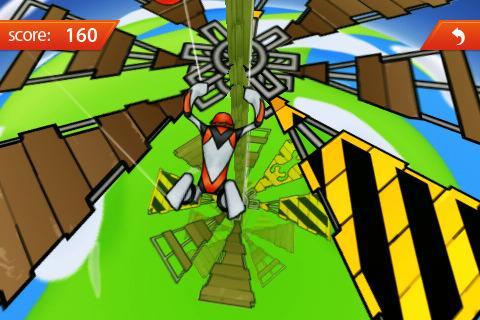 Jimmy Pataya digs jumping out of airplanes without a parachute or a plan. It’s that kind of fly-by-the-seat-of-your-pants thinking that got him into the mess known as the “Grinder,” which is a pretty accurate name for the gauntlet he’s about to run. Now it’s up to you to and guide Jimmy through the blades as he falls to Earth. Spoiler warning: he’ll never make it to the ground; he’ll just fall forever. Which I guess is just as well since he’s got no parachute. Jimmy, you gotta start thinking before you leap!

When the game starts, Mr. Pataya jumps out a plane and falls past an image of an iPod with arrows off the side of it (imploring you to tilt it). Congratulations, you’ve just finished the tutorial! Hopefully by now you’ve tilted the device a bit to see how you control Jimmy, because before you know it here comes the grinder blades. You need to rotate Jimmy around to pass through the gaps in the grinder, so he can keep falling towards earth.

The game is controlled entirely though the tilt motion sensor, and it’s as smooth as silk. Tilting the iPhone rotates Jimmy Pataya around the center point of the rope where all the obstacles hang. Jimmy just hangs tight, falling through the sky as you find openings in the blades to guide him though, scoring points for how long you go without hitting anything. Similar to Canabalt, there’s no health or lives here. You get exactly one screw-up. Hit a blade and it’s game over.

The game has a super cartoony style that certainly fits the premise and everything has a great look to it, especially the clouds and Earth. Little comic book action lines appear around Jimmy’s hands and feet as you fall faster and faster. The game does a great job giving you a sense of speed.

While the music is generic “extreme” type rock, it’s accurate theme music for an idiot that leaps out of planes with no ‘chute spelling certain doom. My favorite part is that he sometimes screams “PATAYAAAAA!” when he jumps out of the plane to start the game. Just thinking about it as I write this makes me smile.

But here’s the rub… while the game is heavy on style, it’s extraordinarily light on substance. This is a high-score chasing game and nothing more, which is typically totally fine, but there’s no polish. The structure and gameplay is there but the game lacks the finishing touches. For example; when you hit a blade to end the game there’s no dying animation of any kind, the game just freezes for about a second and a half then it flashes to the score screen. Moments like this just feels unfinished. 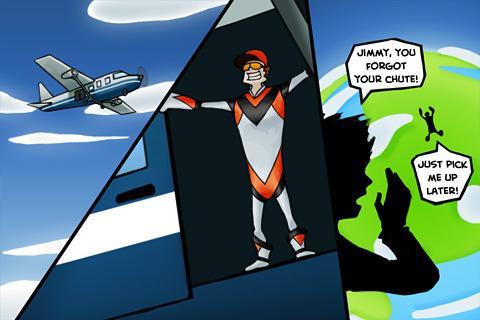 On the credits page the developers boast that they made the game in two weeks (because they can). They even chronicled the whole thing on their webpage, going from concept to App Store submission in that short time frame. While what they managed to create in that amount of time is admirable, what Jimmy Pataya really needs a bit more time in the oven (or at least a few tangible patches).

No options, no alternative game modes, no leaderboards – just jump into the grinder and see how high you can score before you die. A game like this that exists solely as an exercise in high score attainment gets old fast when you’re just competing with yourself. Sure you can challenge friends via Twitter, but it’s not enough. Add in some more features like online leaderboards so I can compete with friends and enemies, and I’ll be jumping out of that plane all darn day.