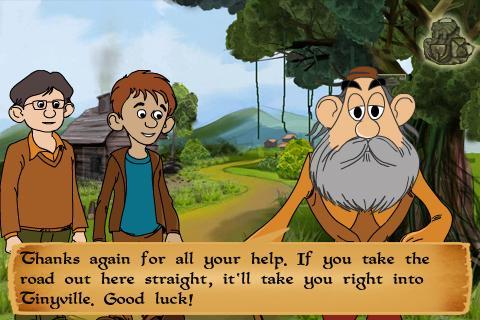 The Professor Layton formula — which involves taking a collection of brainteasers and disguising them as an adventure game — is quickly becoming a genre in its own right. Ever since the Professor made his debut two years ago, a number of games have attempted to mimic the formula, with varying degrees of success. The latest is The Jim & Frank Mysteries: The Blood River Files, which nails the basics, but fails to match the level of charm of its more successful predecessors.

Every year on Jim’s birthday, his eccentric uncle attempts to add a bit of adventure to his life by giving him a quest to complete. And on his fifteenth birthday, Jim sets out on his biggest adventure yet. He teams up with his best friend Frank and over the course of the game will meet several quirky characters, explore the strange town of Tinyville, and learn the mysteries of the Blood Rivers Files, all while trying to find his uncle.

The story itself is interesting and relatively lengthy for an iPhone game, but it’s marred by poor writing and boring characters. Jim and Frank make a good mystery hunting duo, as their near opposite personalities result in some funny back and forth. But the majority of the characters you’ll meet along the way aren’t anywhere near as interesting. In most cases, they feel more like random people thrown in simply to give you a new puzzle to solve, rather than move the plot forward.

But the characters you’ll meet do serve a necessary purpose, as everyone you’ll meet has a problem that needs solving. And in every case, this takes the form of a brainteaser. You might have to plan a route on a map or help a bartender pour glasses of wine. The puzzles are challenging, if not particularly creative. Unfortunately, many of them have unclear descriptions that can make it difficult to figure out just what you need to do.

This is alleviated somewhat by the game’s hint system. Like all of its ilk, The Blood River Files features multiple levels of hints for each puzzle, and you can collect additional hints scattered throughout the game. But the game also goes a step further, letting you skip puzzles all together if you’re stuck. This takes up quite a large number of your precious hints, so it’ mostly serves as a last resort. That is, unless you feel like spending a few extra bucks, as The Blood River Files lets you trade real world money for additional hints.

While it may not be at the same level of quality as similar games like Puzzle Agent or the Professor Layton series, The Blood River Files is still an enjoyable game in its own right. Despite its occasionally unclear objectives and cast of one-dimensional characters, it does a good job of mimicking the formula and presenting an engaging mystery to solve. And at $1, it’s a quick and easy way to get a solid dose of puzzle solving, mysterious fun.