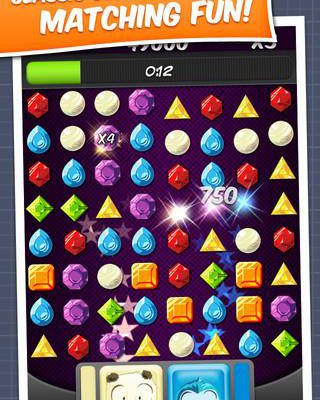 You’ll want to share your jewels with friends and family! Wait a minute…

The gamer population is growing exponentially, in large part due to the veritable flood of games being released on mobile platforms. Of course, it can be hard to fish the winners out of this monster wave of apps. That’s what makes it so special when you do find something good—something like Jewels With Buddies. This cute match-three game by Stofle Designs will no doubt be responsible for creating a good number of new gamer converts.

As social game giant Zynga has lately proven with games like Words With Friends, casual gamers love to connect and challenge one another. The “With Buddies” games also capitalize on this idea, and Jewels With Buddies allows match-three fans to pit their skills against friends and strangers alike. Anyone who’s played Bejeweled or any other gem-centric match-three will know instantly how to play this game, but it offers a brief tutorial if you’re one of the few who haven’t. For the uninitiated, the point of the game is to line up three of the same colored jewels on a field full of different ones by swapping those adjacent to one another. As the matched ones vanish, the others cascade down, often causing more matches and score-augmenting combos. Most games in the genre time your match sessions and toss in various power-ups to make things more interesting and this one does the same.

Match sessions in Jewels With Buddies are a mere sixty seconds long, so it’s important to maximize that time by using power-ups. These can be bought before each match session, with coins earned from playing or with real-world money. Power-ups can be used two at a time and come in the form of cute zoo animals that affect the playing field in different ways. Once you’ve matched enough of the right-colored gems and filled an animal’s meter, you can unleash its power: anything from an elephant that crushes half the board, a penguin that slows down time or a monkey that swings past, zapping all the gems of a specific color. It’s fun to experiment with the different power-up combos, and even more fun to choose combos randomly by betting coins on a slots-style mini-game. 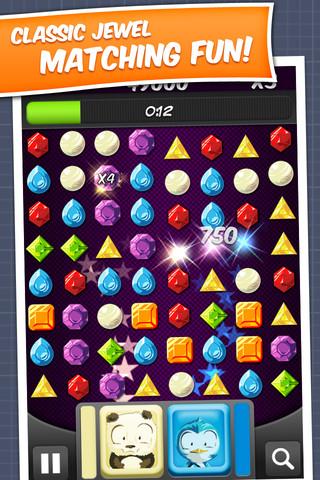 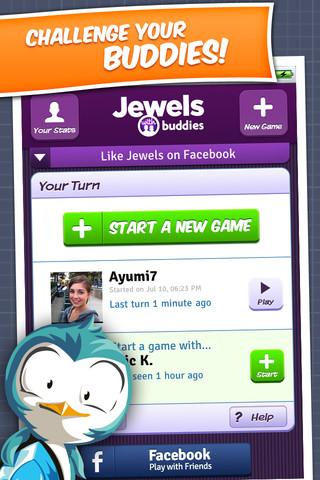 Match-three players know that the genre is all about the power-ups, and Stofle Designs knows it too. The cartoon animal power-ups here are super-cute, and their animations as they perform the various power-ups are really entertaining. Actually, the game as a whole looks pretty good. Gems sparkle appropriately, effects add the right amount of pizzazz and menus are clean and stylish. The sound design on par with the graphics and features plenty of animal noises, plus all the booms, pings and tinkles you’d expect from a game about cascading gems. While the audio-visual aspects of the game are admirable, the best thing about Jewels With Buddies is its quick and user-friendly multiplayer setup.

One of the most frustrating things about playing online games is finding someone to play with, and many online shooters and team-based games never get off the ground because of this. Of late, smart developers have been using a turn-based approach to multiplayer as a means of getting around this issue, and Jewels With Buddies employs this very successfully. Match sessions start with you challenging a friend via Facebook or letting the game match you up with a random opponent. Where  matchmaking here differs from that in other online games is that since match sessions don’t occur in real time, players can take their turn whenever they want to. Each game is three rounds long, and when it’s your turn, the game sends you a notification. You then play your sixty second round, the game records your score and notifies your opponent that it’s their turn, and the winner’s declared once three full rounds have been played. It’s a smart idea that allows players to engage in online competition at their convenience, without having to commit to specific play times. 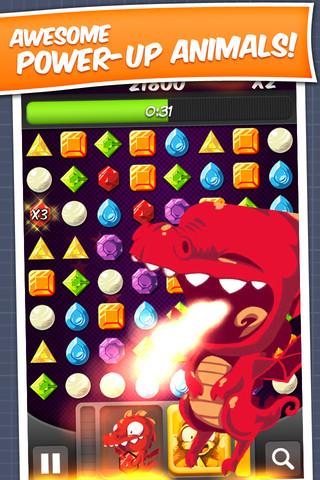 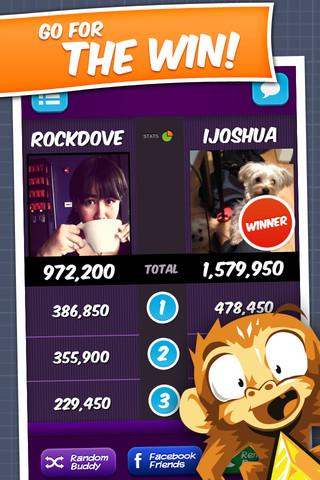 In addition to this, the game features a stats screen that tracks wins/losses/forfeits both in numbers and with a pie chart, and offers an in-game chat window that allows you to communicate with (translation: smack talk) your opponents. Rematches are as simple as the tap of a button and an additional “Brag” button makes it just as easy to tell the world about your wins on Facebook and Twitter. This is all to the good, but if there’s anything Jewels With Buddies could stand to have more of, it’s depth. The game never really veers from its simple, match-three formula and many gamers will master it within the first ten minutes. For those players, it’s bound to be the interactive equivalent of a good pre-meal appetizer—tasty but unsatisfying.

Despite this issue, Jewels With Buddies is a fun little game and hey, it’s free! Yep, right now this humble little match-three game is one of the top five free apps in America, and for a limited time, has had its $1.99 price slashed to make it a free download. Even when the price goes back into effect though, this is still one of the best little mobile games in recent memory, and competitive match-three fans should make sure they don’t miss it.