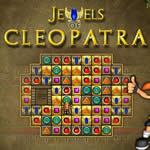 Archeology is portrayed hand-in-glove with show-stopping adventure in films such as Raiders of the Lost Ark and The Mummy. In real life, however, it’s a much more tedious, slow-paced endeavor. Albeit, still exciting when a unique discovery is made.

Fortunately, Jewels of Cleopatra, a tile-matching puzzler with an Egyptian premise, shares more in common with the flicks than archeology itself.

Assuming the role of Dr. Felicity Turnstone, it’s your responsibility to unearth nine ancient artifacts buried in nine temples dotting the Nile Valley. While not that daunting of a task for a seasoned archaeologist, your mission is complicated by an unscrupulous art dealer, Shady McGrady, who’s up to no good at your expense. So, you’ll need to work fast to beat him, matching gems and collecting treasures as you go.

Fitting neatly into the match-three category, your goal in Jewels of Cleopatra is to clear a path for Felicity from entrance to exit on each of the game’s 100-plus levels. Stopping at treasure rooms nets you their wealth and extra points, as well as special tools to aid in your quest. But, at its root level, gameplay is all about matching, in horizontal or vertical lines, three or more identical gems.

Initially, you begin by matching jewels of just four different varieties. As you progress through the game and the levels become harder, more gem types are introduced. Eventually, a dozen will appear. Each of the nine temples also features a pair of mini-games. In addition to gem matching, nine hieroglyph puzzles need to be assembled and nine scarab races won — fun little extras that give the game an added twist. Moreover, on the final level of each temple, you’ll find yourself in a mad race to the finish against Shady. Get there first and the artifact is yours.

Each tile on a level’s grid begins as a stone. As Dr. Turnstone turns stones, matching the gems above them, the tiles beneath turn gold and become a path to traverse. Regular stones require one match. Dark stones and those made of metal demand two and three matches, respectively. Obstacles stand in your way, as well. Blockers, well, block your path and require several jewel-specific matches to remove. Rocks can be swapped like gems, but not matched. Their removal requires a special tool.

In addition to Blockers and Rocks, crusty critters seek to thwart your progress. These include Scorpions, Spiders, Locusts, Snakes and Mummies. Get stung by a Scorpion, bit by a Snake or attacked by a Mummy, and you’ll end up back at the start of the level. Spiders trap you in place and cover jewels with their webbing, while Locusts swam over the board and change gold tiles back to stone.

As for those special tools mentioned above, nine are provided to expedite your journey. These power-ups, earned by matching five tiles, recovering treasures and winning scarab races, consist of Gold Tiles that turn a single tile gold, Gold Tile Blocks that transform a square of nine tiles, Banishers to dispel mummies, Column Breakers for destroying a column of precious stones, Row Smashers to demolish a row of gems, Dynamite for obliterating a nine-tile block of jewels, Gem Matchers to destroy a single type of bauble in a seven-by-seven grid, Bug Spray for killing Scorpions, Spiders and Locusts, and Pickaxes to clear Rocks. An ample supply of each is provided.

What it all adds up to is a well-made, enjoyable gem-matching romp in full Egyptian garb. The back story’s depiction via comic-style panels is beautifully handled, animated touches abound adding to visual appeal and the music is simply brilliant. As a whole, the game comes together quite well. I only wish the gems had a bit more sparkle. Nevertheless, it doesn’t detract from the game’s addictiveness.

But, lusterless gems are not the only bit of “stale air” hanging in these catacombs. A single game mode hamstrings its full potential. Adding a timed alternative would have increased its value, especially for experienced gamers who will find the challenge a bit lacking. Jewels of Cleopatra would also benefit from greater variety in attacks levied by its critters. Running into Scorpions, Snakes and Mummies has the same effect — sending you back to the start of a level.

Regardless, to put a wrap on this mummified title, there’s a lot to like about Jewels of Cleopatra — especially for match-three fans. While the challenge may be lacking for some casual players, it’s still a fun, addictive diversion. And, that’s something you can’t de-Nile.