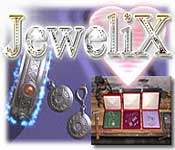 Got a thing for precious stones? Then you’re in luck: Mouse-mashing puzzler JeweliX is all about sprucing up an old jewelry store and turning jewels into eye-catching trinkets like rings, necklaces and bracelets. Unfortunately, as good as the game’s eye for pairing gems with the right accessories proves, the outing isn’t nearly as sharp when it comes to actual play and polish. Bummer.

According to the storyline – conveyed, like most peripheral visual elements, using poorly-rendered characters/objects, ugly fonts and still screen displays – you’ve flown out for your great uncle Pierre’s funeral. As his attorney reveals, the old chap’s left you a jewelry shop that’s seen better days. After conveniently discovering a hidden cache of gems in the workshop, you set to reopening the place and sprucing it up through the use of judicious upgrades (new walls, floors, counters, cabinets, etc.). Sadly, it’s hardly compelling stuff, with play only marginally more entertaining.

Think Luxor or Zuma, only on a cut-rate budget. At any given point, you control a round, rotating gem cannon manipulated via the mouse and capable of shooting out varyingly-colored pieces of amber, pearl, onyx and other pricey baubles. Left-clicking causes it to fire; right-clicking, to swap ammo with a back-up jewel also housed nearby.

Tackling a series of single-screen boards along which rows of gems slowly wind towards a game-ending jewel box, you’ll have to prevent their arrival by making matches of three or more like-hued stones. Do so, and these items disappear from play, with any remaining identical stones that bookend gaps being instantly drawn together. Don’t be fooled by the standard setup, though. As you’ll soon discover, many features common to the genre are either missing, or implemented in a way that’s neither elegant nor original.

Granted, jewels themselves are something to look at – the graphical quality on chunks of malachite, tiger’s eyes and pieces of aventurine is attractive enough, with spherical stones glistening and rolling along at a brisk clip. Unfortunately, other aesthetic elements don’t hold up so well as previously mentioned, nor do the routine power-ups (shields, aiming sights, time-stopping bonuses) amaze or delight.

We’re also a bit mystified as to why gems drawn together into groups don’t automatically disappear and create cool combos as in competing titles. Note that stones sit side by side in adjacent rows, versus winding along in a single string as seen in rivals too. As such, it’s frequently possible to find yourself facing down several individual, orphaned stragglers that need to be picked off… no small annoyance.

Of course, the creators do a nice job of changing your cannon’s position on the board from stage to stage. There’s even an interesting twist in the ability on levels with extra rows to fire balls over certain chains of gems in a precise arc. Make matches of four or more balls, and you further get to watch as stones are set into pieces of on-screen jewelry, which can be sold between rounds to potential customers to fuel the purchase of shop upgrades. Collectible trophies – awarded for meeting certain cash goals, creating diamond-studded offerings and beating scenarios in record time – further make a nice addition.

But from 1996-era audiovisuals (including a snooze-inducing soundtrack) to rampant misspellings (e.g. “pendent”) and numerous interface errors (i.e. customer dialogue windows that don’t properly scroll), this is a generally sloppy effort. Some may even take odds with the range of patrons who show up looking to do business and must be coaxed into purchasing your wares via a simple dialogue system that employs predefined conversational responses. Yours truly’s favorite: The Orthodox Jew who arrives demanding – you guessed it – an immediate discount. More tellingly still, you’ll never feel emotionally invested nor particularly engaged by the action itself.

The end result: With better production values, a little gameplay tweaking and a proper pass at localization, JeweliX might’ve shined. As is, however, the tale’s luster is looking a little tarnished. And with a flood of alternate, and more attractive, wealth-themed outings available, it’s hard to see why anyone would choose this over competitors like Jewel Quest or Gem Shop. Nuff said.