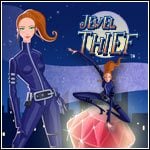 Anyone who’s bought a diamond wedding ring, or seriously contemplated its implications, is familiar with the Four C’s – carat, color, clarity and cut. In simplest terms, the larger the weight, the purer the color, the more flawless the stone and the better its proportions, the higher its quality and more stratospheric its cost. Jewel Thief, a gem-based puzzler, offers the game equivalent of a rare diamond. All facets of its creation work together to make it a stand out. The clincher? It can be had for the price of a cubic zirconia.

The story behind Jewel Thief focuses on Tiffany, a trusted employee of BigGemCo by day and a hijacker of jewels once the sun has set. Though her day job creating unique jewelry is entertaining, it’s her after hour’s pastime of purloining “hard to obtain” treasures for private clients and The Agency, a shadowy syndicate for the rich and influential, that really adds intrigue and longevity to the game.

Modes of play for would-be pilferers include Story, Jeweler and Thief. Story Mode combines the play elements of both Jeweler and Thief Modes, alternating between them as the player assists Tiffany in her double life. Tiffany’s tale, which weaves the two play styles together, is brief and to the point, and play in all modes resumes where you left off or you can choose to begin over again if you wish. Those who prefer one play style over the other can elect the Jeweler or Thief modes, described below, to continue their enjoyment.

Play is simple to master and consists of clicking on and dragging rows of gems to make matches of three or more stones horizontally or vertically (sorry, no diagonal matches allowed). Uniqueness is added via the dual game modes and a few variables.

Jeweler game play consists of matching specific gems to complete a level. Match as many gems as you can, then click the Submit button. Do so as often as you like, but watch the counter. You have all the time you need to create matches, but the number of moves per level is limited and each piece of jewelry requires specific gem matches, all emeralds for instance, to complete. Points are received for all matches, but only specific gems complete the current setting. So, plan very carefully.

A laser scanner and time element is added for Thief game play. Earn 200 points or more on each pass of the scanner or the system goes into Alert status. Should this happen, you’ll need to score at least 400 points on the next pass to avert the Alert. Fail and you’re detected as an Intruder. Then, the only out is to create a five-gem match before the next laser pass or it’s “Game Over!” You need to think on your feet in this mode.

Jewel Thief also packs a few variables. Challenges consist of Locks and Rough Stones. Locks keep you from moving the rows and columns in which they appear. You can destroy them, but only by creating a match based on the gem inside. Rough Stones simply get in your way, leaving you to work around them.

The other variable is Power Gems, created by lining up five or more stones of the same type to generate special effects. In combination of three or more, the results are multiplied. Each gem has a different effect, too, when turned into a Power Gem – explosive power, point multiplier and time manipulation for example.

What makes Jewel Thief stand out? Gorgeous cartoon-style graphics give the game a unique flair. Glints, sparkles and other gem effects are stunning. Audio effects and soundtrack are quality fare, as well. Nevertheless, the real gem of Jewel Thief is its addictive game play. “Just one more level” quickly turns into two, three, ten and more. For play at home, it’s great. At work, its addictiveness could get you canned.

Of course, few gems are flawless and Jewel Thief has a couple imperfections of its own. Those who prefer a more “pure” play style may find the game’s Story Mode a bit unappealing with the constant switching back and forth between Jeweler and Thief game play. It can break the flow of the game for some. Its chief failing, though, is a lack of adjustable difficulty levels. Including this option would add increased playability to the game.

Still, Jewel Thief is no diamond in the rough. It’s a polished gem that’s a cut above the rest. It’s easy to learn and play, and amply addictive. Even though its theme is a touch more “feminine” than most casual titles, anyone young or old with a fondness for Bejeweled-style games will enjoy this gem-matching puzzler.