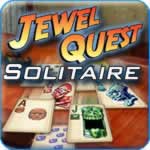 What do you get when you mix Jewel Quest, one 2004’s most popular puzzle games, with Solitaire? Simple. Jewel Quest Solitaire, the latest puzzler from iWin.

So, don your fedora, tuck your journal in your rucksack and prepare to be dealt a winning hand. It’s a jewel of an adventure!

Two modes of play greet you when you first launch the game: Full Quest and Just Cards. The former leads you via its daring tale through the complete game, nearly 100 layouts in all, while the latter provides a cards-only variant sans storyline.

You play the adolescent nephew of adventurer and scholar, Professor Percy Pack. Following an ill-fated excursion to Mexico, Pack returned with nothing to show but some jewel sketches and homemade playing cards. It’s as you learn the nuances of his special game that he allows you to read the journal from his amazing quest.

The goal in Jewel Quest Solitaire is to move the cards on each layout to a Foundation pile, valid plays being those one value higher or lower than the top card displayed. When you’ve used all playable cards and no plays remain, flip a card over from the Stock pile and try again. Remove all cards before your pile is depleted and you’ll advance to the next layout. Run out and you’ll need to start over. Hints and a limited Undo feature assist if needed. It all sounds familiar to Solitaire fans, right? Well, there’s more.

Multipliers, a unique feature, play an important role in Jewel Quest Solitaire, too. Each card bears a multiplier value with points awarded equal to that value. Cards played in a consecutive run raise the value, as well, as do cards in the same suit played successively. Unused cards, along with some Wilds, also ramp up the multiplier.

Jewel Quest Solitaire is not just a card game, however. It also incorporates a mini-version of Jewel Quest. As cards are played, jewels drop onto a board in the lower right corner, each matching the suit of the card played. Extra jewels are added for sequential plays and matched suits. Plus, when three or more jewels of the same type match horizontally or vertically, the spaces behind them turn gold, adding to your point total.

All this “action” transpires while playing Solitaire. It’s not until you’ve cleared the layout that the mini-game actually begins. Swaps, earned for playing cards of matched suits and remnants of the Stock pile, allow you to “swap” jewels on the board to create matches of three-of-a-kind or more. Doing so removes those gems and turns the spaces gold, maximizing your points. Play ends when you’ve expended all your Swaps or changed all spaces to gold. Unused Swaps are converted to points.

Naturally, obstacles still thwart your success. Chief among these is the luck of the deal — how the deck is shuffled, dealt and what lands in the Stock pile. As such, a seemingly easy layout may take several attempts while one that looks imposing may clear on the first try. Additionally, you’ll be challenged when faced with a No A-K Wrap card if you don’t also possess a Cancel Wilds. Some layouts have multiple Foundations, but no Stock pile. That can be a stickler, too.

Just Cards mode, mentioned earlier, focuses on Solitaire. It employs the same layouts as Full Quest, sans story. Jewels are still added to the game board, requiring an identical play strategy. But, there’s no mini-game to play, no swapping of jewels to increase your score.

In the course of play, I only discovered a few minor “flaws.” First, since you really can’t play the Jewel Quest mini-game in Just Cards, that element should have been removed. Second, adding a Just Jewels mode would have increased play value, especially for those who never experienced Jewel Quest. A wider selection of Wild Cards would have helped, too. For example, a special Wild Run card that lets you remove any five cards. Regardless, most of what’s dealt in Jewel Quest Solitaire is top notch. Its well-integrated story is interesting, overall production values are high, and play is addictive.

While it only includes one variant of Solitaire and the Jewel Quest mini-game is somewhat abbreviated, there’s a lot to like about Jewel Quest Solitaire. It’s a fun, captivating diversion that does a solid job of satiating the needs of Solitaire fans and gem swappers alike, and is guranteed to draw you into its world for hours at a time.