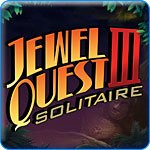 Notable for the way in which it elegantly combines playing cards with puzzle-solving, the Jewel Quest Solitaire series has long been a favorite of casual game fans. While it’s more of a natural expansion for the series than sweeping revamp, the same holds true for Jewel Quest Solitaire 3. Marrying simple match-three action with classic tabletop fun, it’s a surprisingly deep, yet approachable title that won’t leave veterans wowed, but makes for an engaging time nonetheless.

Following the adventures of Emma and Rupert’s pal Ratu in quest mode via intermittent journal updates, you’ll head off into the exotic wild. Visiting remote destinations from Cambodia to Egypt and Peru, you’ll attempt to complete a variety of increasingly difficult stages which unlock photo pieces that can be reassembled to collect exotic artifacts. However, to ultimately succeed, a series of individual scenarios alternately presented as games of solitaire or pattern-matching mindbenders must first be overcome – no easy task, depending on the given stage configuration or layout.

At its base level, the game follows the general rules of solitaire. Faced with several piles of cards, play involves stacking them in descending order (King, Queen, Jack, 10, 9, 8, etc.) and alternating suits. A deck of cards also waits below, which you can flip through to obtain additional moves. Slowly, but surely, your goal is to transfer cards from the playfield to foundation piles, divided by suit, in ascending order.

The trouble being threefold: One, every choice affects the possible outcome of the game; two, you always have to plan ahead and leave yourself as many potential moves as possible; and three, constant worries range from running out of possible maneuvers to limited access to certain piles and buried cards that can only be uncovered using bonus abilities.

Per usual, small extras such as limited options to instantly undo moves and universal wildcards make life easier, letting you take back mistakes or substitute in temporary replacements for missing playing pieces. But the most interesting addition here (beyond the nifty jungles, temples and other colorful environs which serve as attractive visual backdrops) is a power-up meter that lets you collect optional windfalls.

Move multiple cards to the foundation pile in quick succession, and you earn points that can be spent on wildcards, x-ray powers (letting you see what values cards lying facedown possess), deck-shuffling extras and more. Ponder the current situation hard enough and make smart use of these special abilities, and instead of suffering the cruel whims of fate, you can negotiate your way out of virtually any snafu. Like options to have the computer automatically finish a hand when it’s obvious victory’s forthcoming, such features help cut down on the time and aggravation often associated with the pastime.

Also helping liven things up are occasional puzzle sequences. Faced with grids of varying size filled with squares inhabited by twinkling jewels, players must swap two adjacently-located gems at a time to create horizontal or vertical rows of three or more identical stones. Do so, and they disappear from play, causing higher-situated baubles to fall downward, filling in gaps, and the squares on which the match were made turn gold. Cause all squares to change colors, and you can proceed onward to the next stage.

Neither particularly inspired or disappointing, these challenges unfold precisely as you’d expect, which is to say they amuse, but hardly prove mentally taxing. In fact, several are way easier to breeze through than solitaire-based scenarios, which in theory should provide a nice gameplay counterpoint, but instead makes for frequent, needless interruption. That said, we do dig the collectible power-ups (options to destroy a single jewel or swap any two stones, gain additional time, etc.) and coins one can access. Still, while it’s nice to have occasional breaks from playing cards, and these sequences do add variety, it’s hardly riveting stuff.

Put it all together in a neat little package rounded out with nifty special effects and sound bites, and you get a perfectly affable title that enthusiasts of all ages will enjoy. But there’s nothing especially earth-shattering or irresistible about the outing either, especially if you’re a fan of the franchise who’s already (wait for it) been dealt a similar hand twice before.

Be a King Review