Home / Reviews / Jewel Quest Mysteries: The Oracle of Ur Review 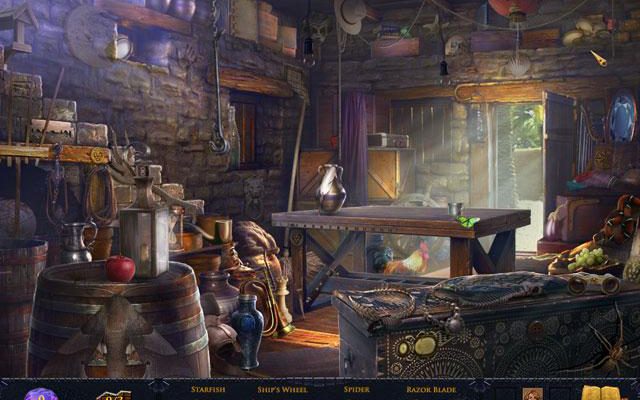 Continuing in the Jewel Quest Mysteries franchise, Oracle of Ur is the fourth installment this time following Emma, Rupert and Sebastian on their journey across the Middle East (and beyond) on their quest for the Oracle of Ur, the ultimate jewel board. Scattered along your path are duplicate jewel boards that may contain clues as to where to find the Oracle of Ur, and you’ll run into more than just a bit romantic tension between our three heroes before all is said and done.

Like past installments, Oracle of Ur is far more a hidden object game than a match-three one. You’ll make your way through some fairly standard point and click gameplay, unlocking scenes or puzzles as you go along (like a tile rotation puzzle that has you opening a locked door, for instance), and only occasionally actually coming across a new jewel board to complete. These hidden object scenes simply ask you to find a selection of items on a list, but there are also jewel board fragments, gems and hint coins scattered throughout each location, making this a more lengthy experience if you wish to find each and every item available.

Finding three hint coins gives you an additional hint, which can be stockpiled and used in bulk if you really find yourself in a spot of trouble later on. The gems, meanwhile, are used to purchase power-ups when you do come across a match-three jewel board as you can purchase extra time for the clock, the ability to swap two gems even without making a match of three in doing so, and so on. The match three gameplay is what you’d expect, and has you making each tile on the board gold by creating matches on top, so many of these power-ups will be entirely unnecessary to veterans of the genre.

Back in the hidden object scenes themselves, you’ll face grainy, outdated graphics that suffer even more from the lack of a widescreen graphics option (granted, that may only apply to certain gamers, but it’s worth noting). You can follow along with the story through cutscenes or by reading entries in your characters’ journals, but some of the voice acting is downright awful, being completely monotone and lifeless.

Other issues with past games haven’t been perfected here either, as extra length is given to the title by way of repeating scenes (with item locations remaining constant) and there just isn’t enough gameplay variety to go around. With the progress the hidden object genre has made in terms of polish and detail, Jewel Quest Mysteries as an entire franchise continues to fall behind.

While the gameplay here functions technically, it’s a rather boring affair with a fairly uninteresting story. With so many games to choose from in the hidden object space, a simply average experience isn’t enough. Even if you’re fond of the other titles in the Jewel Quest Mysteries franchise, there’s not much reason not to give this one a go as it’s essentially the same game as the last. However, if you’re new to the series, there might not be enough here to make you come back for more.