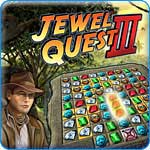 Just when we thought the long-suffering Rupert was finally going to be able to settle down, a disaster strikes that sends him globe-trotting once more in Jewel Quest III, the second sequel to one of the most popular match-three games of all time.

Rupert and his wife Emma are on the verge of seeing their dream come true and opening a museum to showcase the various artifacts Rupert has collected over the years. But the couple’s young daughter Natalie suffers a horrible accident – while playing with Rupert’s jewel board she opens a secret compartment that releases dangerous spores into the air that turn her blind.

Suspecting his old nemesis, Sebastian Grenard, of planting the spores inside the board as revenge for stealing Emma back, Rupert must postpone his museum’s grand opening and travel the world once more in a search for a cure to Natalie’s blindness.

The core formula of Jewel Quest III is the same as its predecessors: match three or more jewels to clear them from the board and turn the tiles below gold. Turn the entire board gold before running out of time to clear the level.

The game’s first major departure is that the world is divided into regions that each offer a different variation on the gameplay. In Iceland, for example, some jewels are encased in ice that can’t be broken unless a special fire tile touches it and melts it, while in Australia the goal is to match 100 silver coins in addition to turning the board gold, and in China you’ll have to "trap monkeys" by maneuvering monkey head jewels into special cage tiles.

South America is a turn-based region. Here, Rupert plays against either Emma or Hani. Each player takes turns making a move on the same board, and the first player to turn a certain number of tiles gold is the winner. There’s also a variation on this where each player has their own board and the goal is to turn your board gold before your opponent’s by making moves as quickly as possible.

As you clear one region, the next one will open up. Within that region, however, you’re free to play each level in any order you wish. The game’s story is still presented as Rupert’s scribbled diary entries, but because of the fact that you can leap around from level to level, there’s less of an overarching story to Jewel Quest III. Instead, you’ll read a series of disjointed vignettes that don’t always lead smoothly into one another. During one level, for example, the diary entry ended up with Natalie wandering off and disappearing, but in the next level she was just there again, with no resolution or explanation.

Another minor gripe is, surprisingly enough, with the graphics. Don’t get me wrong, the main menu screen, cleverly arranged as an interactive museum lobby, and the world map, which is represented as a rotating globe, are wonderful, and the pretty backdrops that have become a hallmark of Jewel Quest are present too. It’s just that there’s only one background per continent, meaning that, for example, the forlorn coastal ruins of Scotland’s Orkney Islands also appear in Norway, Finland and every other European stop on the world tour.

Like its immediate predecessor Jewel Quest II with its fiendish buried jewels, portions of Jewel Quest III are incredibly challenging, and the time limits imposed on every level certainly don’t cut a player any slack. Expect many levels to turn into races against the clock, which gets frustrating on some of the finickier boards when it’s easy to become stuck in awkward corners. I found myself wishing for some sort of power-up that would add more time to the clock, or even just freeze time for a spell.

Because of these foibles, Jewel Quest III is a game perhaps best enjoyed in shorter intervals rather than marathon sessions (unless you have either superhuman match-three skills, the patience of a saint, or a combination of the two).

That said, it’s nice that the gameplay changes up with every new continent, and Jewel Quest III offers great bang for the buck in terms of sheer length. You can go back and replay levels at any time, which bumps up the replay value, as does the popular Tournament mode, which makes its return and lets you play online against other real players on 40 different boards.