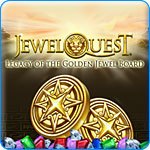 In the aptly titled Jewel Quest: Heritage, Rupert’s arch-rival Sebastian Grenard has stolen the Golden Jewel Board, claiming it as a family heirloom. In order to prove that the board is rightfully his, Rupert must trace the origins of the Jewel Board all the way back to the Aztec Empire while investigating his own family tree to see how the history of the jewel board is intertwined with the lives of his own ancestors.

The fourth game in the gem-swapping match-3 series features the same core gameplay as its predecessors. The goal is to match three or more jewels to clear them from the board and turn the tiles below to gold. the board is complete when all the tiles are turned to gold before the allotted time limit runs out.

There are a couple of new board types this time around, including a Limited Jewels mode where there are only so many jewels available to complete the board before they stop appearing; and a Swap Mode where you have a limited number of moves (as well as a time limit) to complete a board, but may swap two jewels even if no match is created. There are 170 boards in total, and an Expert mode to unlock as well.

Where Jewel Quest III grouped the jewel boards into geographic regions, each of which introduced a new twist into the gameplay (such as ice blocks or evil monkey head jewels), Heritage takes a different approach by arranging the boards along a vast family tree that starts with Rupert’s daughter Natalie and goes backwards through hundreds of years of Rupert’s ancestors.

Each family member appears as an info card that gives some background about the person and a handful of puzzles to complete. For each jewel board completed you earn a puzzle piece that can be used to help unlock earlier ancestors – and new jewel boards.

The difficulty level on the jewel board challenges gradually increases the higher up you go on the family tree, with new twists regularly added into the mix like indestructible blocks, locked spaces, buried jewels and ice blocks. Board layouts become more fiendish and finicky too.

The family tree affords a more open-ended feel than the world map approach, given that you’re free to swap between family members (and, by extension, different board types and characteristics) as long as you’ve found the necessary puzzle pieces to unlock them. In other words, if Swap Puzzles aren’t your favorite type of board, for example, you aren’t necessarily stuck playing five of them in a row; you can leave them and try one of the other character’s boards.

Both the Swap and Limited Jewels boards are interesting variations that work well in the Jewel Quest context. The story is presented in voice-over for the first time, which is another small but nice touch.

However, Jewel Quest: Heritage isn’t wholly satisfying for a few reasons. First and foremost, the story is dull. The premise of tracing the jewel boards through history and delving into Aztec lore sounds quite intriguing, but in reality you’ll be exploring a lot of museums and musty old castles, talking to archivists, curators, maids and other less-than-thrilling personalities who rarely have anything interesting to say. I’m usually genuinely interested in reading a game’s dialogue, but this time I eventually became thankful for the Skip button.

Also, while tricky gameplay and strict time limits that don’t cut the player any slack are both hallmarks of the Jewel Quest series, Jewel Quest: Heritage seems to take them to a new extreme. The time limits, for example, often seemed just a little too severe. More than once I found myself just one move away from clearing a board only to have time run out right before I could click on the final move. Often this was a result of having to wait for a cascade of matches that I had unwittingly triggered to finish moving.

Having a time limit at all seems like overkill in Swap mode, too, since you’re already working under the restriction of having a limited number of moves. It might have been nice to have just one mode where you could just relax and think strategically instead of constantly racing against the clock. Another annoyance that caused me to restart more than once was that if the game thinks you have no more moves left in Swap mode it will automatically activate your Specials (a power-up that allows you to click on any square on the board and turn it Gold). The catch? There would still be moves left that the game, for some reason, just didn’t see.

If you want a real challenge and a game that won’t hold your hand, a game with some serious longevity that you’ll be able to pick at for weeks and weeks, then give Jewel Quest: Heritage a try. Make no mistake, you will get frustrated, but in some ways it makes it all the more satisfying when you finally vanquish that particularly irksome jewel board.