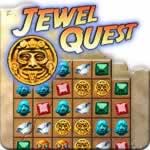 Indiana Jones, eat your heart out.

Rather than wait another two long years for the much-anticipated sequel to 1989’s so-called The Last Crusade, you can instead satisfy your craving for exploration and adventure instantly with chart-topping blockbuster Jewel Quest.

Told as one intrepid researcher’s search for a fabled temple and the fabulous riches it contains, the tale – a pattern-matching puzzler extraordinaire – remains just as engaging now as the day it debuted in 2004.

The name of the game: Making horizontal or vertical patterns of three or more adjacent relics (precious gems, masks, coins, sparkling-eyed skulls). The way to do so: Clicking on two tiles, which – so long as they’re located next to each other on a varying-shaped grid of squares – causes the pair to exchange positions.

Also worth noting – squares turn gold when a match is made using them. Manage to change the color of all squares on the playfield to gold within an allotted time limit, and you’ll win each stage. Bonus points are then awarded based on performance (the faster you beat a stage, the more earned) before you progress onward to the next challenge.

Making things easier, of course, is the potential to create huge combos. Relics naturally disappear from the board when incorporated into a match, causing any stationed above to fall downward, filling in gaps in the grid. Plan a few steps ahead, and you can provoke massive chain reactions, inflating your score while causing huge avalanches of tiles that produce more meaningful and eye-catching results than individual matches.

Four lives, or chances to complete the quest, are afforded at the beginning. (More can be earned by hitting certain score minimums.) Fail to complete a board fast enough and you’ll lose one.

Run out of the lives and it’d be a shame – you’ll miss out on seeing the beautiful, shifting backgrounds which prove a series hallmark. Traveling a seemingly ancient, hand-drawn map between levels, you’ll jump from primeval forest to mysterious cavern and crumbling ruin. All prove welcome sights, adding incentive for ongoing play, especially when you consider how statues slowly turn to gold and passageways visibly open with your every accomplishment.

Features like carefully-balanced action, crisp sound effects/graphics and a first-rate narrative (told via suspense-filled journal entries) that ties the entire outing together conspire to give the title unprecedented longevity.

The fact you’ll find yourself repeatedly slogging through the experience in hour-long sessions (although 15-minute outings are equally viable) for sake of the storyline as much as gameplay says it all. The sense of atmosphere evoked here is no less important than the program’s expertly-crafted blend of mind-bending excitement.

Meaning the title succeeds at doing what so few computer games – even more expensive offerings targeted at high-end hardware setups – can. It actually makes you feel like you’re the star of a turn-of-the-century cinematic thriller, on the hunt for invaluable artifacts, the last remaining mortal vestiges of a long-forgotten civilization.

Tightened time constraints and tougher grid layouts… Just a few examples of the ongoing challenges you’ll face. But dive headfirst into the journey and you’ll find it never aggravates, nor ceases to satisfy. Simple and yet oh-so-undeniably addictive, this one’s a true classic in every sense of the word.

If you haven’t checked out Jewel Quest yet, well… what are you dilly-dallying for? Suffice it to say you won’t be disappointed, and that there’s a wealth of good times waiting in store.