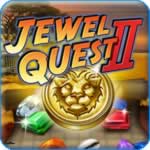 It’s not easy to create a follow-up to one of the most popular match-three games of all time. Thankfully, it looks like iWin could easily have another blockbuster on its hands with Jewel Quest 2.

Neither the gameplay nor the tale surrounding it has grown stale in the two-year hiatus between the original Jewel Quest and the recently-released follow-up. The ongoing story of Rupert, the mildly obsessive antiques hunter, is still told as compellingly as ever in the form of scribbled diary entries that explore themes of love, adventure and greed.

At the start of the game we find that Rupert’s love, Emma, has left him for the wealthy fop Sebastian Grenard. Distraught, Rupert leaves the university and hops onto a cargo ship bound for Africa, where he continues his quest to try and master the elusive relic known as the jewel board.

The puzzles in Jewel Quest 2 don’t stray too far from the addictive formula of the original. For the uninitiated, the challenge is to match three or more relics (jewels and an assortment of African masks, shells and animal charms) horizontally or vertically to clear them from the game board. When a match is made, those relics disappear from the board and new relics slide into place. The squares underneath relics that are used in a match will turn gold, and if you manage to turn the entire board gold before running out of time (or moves), you pass the level and are able to move on to the next.

You’ll notice a few new things this time around as well, including a handful of new tiles types. Buried jewels are relics partially encrusted in rock that have to be matched twice before the square turns gold – once to bust the jewel out of the rock, and a second time to actually make the jewel disappear. Unidentified buried jewels are an even more dastardly variation. Not only do they have to be matched three times to make them disappear, but the relic is completely hidden by the rock so that the only way to figure out what relics are needed to match with it is by trial and error.

There are also gold coins, which can be matched like any other relic and will grant special moves to the user. Special moves can be horded like Get Out of Jail Free cards, and can come in very handy in sticky situations to do one of three things: uncover a buried jewel, turn any square gold, or remove any jewel from the board.

Jewel Quest 2 provides a consistent challenge with time limits that aren’t generous, devilish placement of buried jewels, and boards of tricky sizes and shapes. The hard slog is well worth it, however, because completing each level nets the player a new diary entry and rich graphical rewards courtesy of the gorgeous shifting backdrops that depict an African bazaar, the scorching savannah, a cascading waterfall and other interesting scenes. The soundtrack is inspired as well, incorporating music that ranges from tribal to gentle and uplifting.

The single player mode boasts more than 175 boards in total. Finishing Rupert’s quest is only phase one of a much larger journey that will include narratives from Emma, Sebastian, and Rupert’s sailor companion Hani. There’s even a bonus Super Hard mode to unlock after all that’s finished.

Quest mode will keep you occupied for quite some time, but the real ace up the sleeve when it comes to Jewel Quest 2’s longevity and addictiveness factor is the brand new Tournament mode, which allows players to compete against other real people online in head-to-head battles to try to score the most points in a timed round. Your online ranking changes depending on whether you win or lose, and you can also compare your score with the global average.

Jewel Quest 2 is compelling, challenging and beautiful, with gameplay that will keep you coming back for more for as long as it takes them to make Jewel Quest 3.