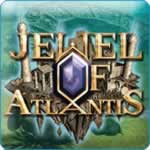 Boom! While there’s great delight in watching a building implode, it’s even more fun to play a one-person demolition derby. Wreak havoc upon underwater ruins on a quest to find lost relics in Jewel of Atlantis, a three-in-a-row-type game that will have you yearning to complete all of the 103 levels in record time.

Quest Mode, which comes in Easy, Normal, and Hard skill levels, introduces the player to the map of Atlantis, complete with a sunken volcano and a mystic temple. By smashing through game levels, the player gains access to further levels and is able to travel in a non-linear fashion throughout the map. Hidden bonus levels with relics are accessible only if the player finishes a specified level in half the time allotted. The game levels can be revisited in Arcade Mode, which unlocks the level once the player has completed it in Quest Mode.

Like Bejeweled, the game-play in Jewel of Atlantis involves swapping two jewels to form a row or column of three or more same-colored jewels. However, Jewel of Atlantis is a lot more complicated. For instance, a “L” shape leads to the formation of a cannon that will fire and knock down an entire row or column if it’s used in a three-in-a-row match. Likewise, a “T” shape will lead to dynamite sticks that pack an explosive punch. Match four in a row and a bomb appears. Match five in a row and the special Rainbow Shell is created. Swap the Rainbow Shell with an adjoining jewel and all the jewels of that color in the nearby vicinity will be sucked into the void. Luckily, the tutorial levels with pop-up explanations gently introduce new gameplay elements with ample time to practice.

Levels differ as well. The variety is staggering. The shapes of the grids themselves change, which can make it increasingly difficult to achieve a three-in-a-row match. If there are no more available moves, the grid is cleared and new jewels fall in to occupy the spaces. A timer sets the pace while counters click off the progress in attacking the various blocks and cells.

Each new level type is introduced gradually. At first, levels can only be completed after players destroy jewels surrounded by bricks. This can only be achieved by swapping adjoined jewels of the same color as the bricked ones, which breaks through and causes the once-trapped jewels to disappear. These bricked areas vary is shape from level to level; they could be sunken ships, columns or stone walls. Next, the player finds wooden boxes with jewels on them that can be swapped. The boxes or cells can be broken with a “match-three-in-a-row” in that location. Steel boxes are harder and will require two “match-three-in-a-rows.” Then there are the keys that need a “match-three-in-a-row” to release the locks preventing the player from getting to treasure or other needed destruction. Higher levels combine these different level elements for a bigger challenge.

With such complexity, it might seem like Jewel of Atlantis is too cluttered, but the tutorials make it easy to take everything in stride. At higher levels, an average level takes around 10 minutes, but trying to stop after just 10 minutes is rather hard. The game’s addictive nature is simply overwhelming. The sound effects of various crashes and explosions add to the fun.

Overall, Jewel of Atlantis is entertainment for all. The player who likes to progress and collect beautiful relics can persist in Quest Mode. The player who simply likes one type of level can go straight to Arcade Mode and pick Blocks, Cells, Jewels or Mixed levels. The ease between choosing different modes or different kinds of levels allows the player to customize the experience.

There are, however, some issues that arise after extended play. A software glitch that fails to re-introduce new jewels after the noted “No More Moves” sign can stall a player’s progress through Quest Mode. Levels that simply ask for 1000 matches can be tedious, especially when the matches have to be done one at a time. On the production side, the background art sometimes matches too closely to the brown of the boxes, making it hard to ascertain which boxes are still left. The mediocre music noticeably repeats over and over. These little things affect the experience adversely.

Nitpicking aside, Jewel of Atlantis manages to make rampant destruction fun. Before long, you’ll enjoy slicing ancient pillars and delight with every boom and blast. Those ancient ruins won’t have a chance.