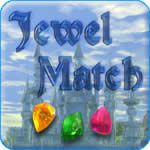 Producing a match-three game has become something of a right of passage for developers of casual offerings. And the releases are so similar, it’s easy to picture developers exchanging a tattered manual listing the necessary components for a successful product. Buried within its pages would be a chapter that reads, “Insert twist here.” Alas, that section must have fallen out before the guide reached the creators of Jewel Match.

Even the title suggests developer Suricate Software and publisher iWin are taking us back to when Bejeweled was a ground-breaking game built on an original idea. Like that classic offering, each of the 150 levels in Jewel Match consists of a grid of squares on which rest an assortment of shimmering gems.

And as in other similar games, you must swap adjacent diamonds and emeralds to create matches of three or more objects. Doing so removes the gold tile underneath the gem and allows more jewels to fall into place from the top of the grid. Since you’re working against the clock to remove all of the tiles, you have to balance strategy with taking action in order to win.

From there, Jewel Match proceeds in lock-step order with other popular titles in its category. For example, you’ll eventually have to make two matches over silver tiles to clear the grid. And then, on cue, locked gems will appear. You can’t move one of these objects until you include it in a match, which releases it from its bonds.

Jewel Match does take the gameplay one step farther by introducing the Magic Hammer. As you create matches, a meter is filled with supernatural power. When the meter is full, a hammer becomes available that can smash any gem on the grid. If you elect to hold off on using the hammer and power it up a second time, you can then remove the tile under a single gem as well as any chains around the jewel. The game rewards patience by allowing you to juice up the hammer a third time in order to eliminate all of one color of gem from the screen.

Because the Hammer allows you to get rid of any stubborn pieces, it’s a welcome addition. It’s especially handy when you have one gem at the bottom of the grid and time is running out, seeing as you can create matches anywhere on the screen to fill the meter. But since other match-three games have included multiple items to use, Jewel Match feels shallow in comparison.

Even the list of bonuses comes up short. Some jewels act as bombs that wipe out nearby tiles and chains. And a pearl will appear from time to time that can be placed with gems of any color to create a match. Lastly, another special object clears an entire row of tiles and jewels when you click it. Except for pesky boulders that create tiles when placed together, though, nothing else shakes up the basic gem-matching action.

And that’s the biggest disappointment of Jewel Match. Whereas other match-three games have thrown in clever twists, such as the gathering of resources in Amen Studio’s Cradle of Rome, Jewel Match is content to stop short of innovation. Even the levels begin to feel similar to one another as you progress.

That’s not to say Suricate’s effort is without value. For starters, the visuals are nice, from the 3D rendered backdrops to the sparkling gems that bounce and spin as you consider your next move. The gameplay is also smooth as silk, with the developers allowing you to make swaps even as matches from your last move mount up. And with 150 levels, there’s plenty of game time on hand.

The music is also worth noting. Although the tracks repeat too often, they’re beautiful and tie in with the theme of enchantment quite well. The same can’t be said of the audio effects, though; the bombs make a barely audible “poof,” as though the sound guy wanted to avoid waking you up from any gameplay-induced stupor.

Should you try Jewel Match? That depends on how much you enjoy matching games. If you’re an addict who’s burned through the dozens of similar releases and are itching for more, give it a shot. If you insist on some substance beneath the shine, however, Jewel Match is a miss.