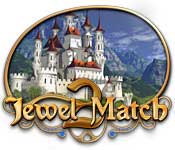 Can you handle another match-three game? Since the release of Bejeweled in 2001, you can’t swing a cat without hitting one. Not that you should be doing that… swinging cats, I mean… but you get my point. Jewel Match 2 is another jewel-matching game that bears many similarities to its predecessors.

The gameplay is very typical of the genre: Swap adjacent tiles and match three or more gems in a row or column to clear them. Your first objective is to make matches over all of the golden tiles on the board. Once you’ve succeeded, the special amulet tiles are revealed. Clear all of the gems underneath them in order to release them from the board and win the round. In the main play mode, you are timed, and must win before the sand in the hourglass runs out. If you don’t like too much pressure, there’s a relaxed mode too.

There are the usual obstacles in your way to make your tasks more challenging. Chained tiles will not budge until you’ve made a match with them. Some tiles are doubled-chained, and must be matched twice. Silver tiles need to be cleared before revealing gold ones underneath. There are also block tiles which must be cleared. In order to break them, make matches directly next to them, and they will burst open to reveal a new playable tile.

There are power-ups to assist you. These come in the form of a variety of hammers that can help break up difficult tiles, and magic spells. The spells are a pretty cool, if not completely original twist, and really give the player an advantage on tough boards. You need to collect and store enough mana to cast a spell. New spells can be purchased with money in the “shop” mode between levels. Money and mana are both randomly revealed on the board, so you can pick them up as you play. Once you’ve unlocked a spell and have enough mana, the spell icon is revealed at the top of the screen. Clicking on it allows you to activate the power-up.

The power of your spells vary, with some being more helpful than others. The “fireball” spell, for instance, completely clears all of the tiles in a cross formation, including double locked and silver tiles! The “bomb” spell clears tiles in a 3×3 grid, but won’t help with clearing any obstacles. There are also upgrades that allow you to earn more gems per level, and those with can slow or stop your timer. You can even upgrade your upgrades eventually, which is neat.

About those gems: You get to collect a number of them as you play, and can use them to “rebuild” a variety of castles as you advance. There’s no real purpose in this, but you do earn desktop wallpaper images of each one.

The boards can look pretty challenging as you reach higher levels, but most of them are easier than you’d expect. When playing very complicated boards, most difficult matches are made automatically for you if you match enough tiles on open ground and allow new tiles to fall into place. If you’re running out of time, you can always trade in a life for an extra two minutes, and that’s usually enough to win.

Fans of the original Jewel Match will probably appreciate the new challenges, but will probably also be dissapointed by the visual effects. While the mechanics have gotten more complex, including more complicated boards and a greater number of power-ups, the overall background graphics were slightly less impressive than the original.

Both are fantasy themed, with beautiful nature scenes that make heavy use of water. However, the original Jewel Quest embellished the screen transitions with better fade outs, which made the whole thing seem more visually polished and less static. The original also toggled between different scenes for each new round, while the sequel has you playing with the same background for a while until you advance.

Still, the graphics and music are on par with what you’d expect from a jewel matching game, and the game itself is easy to play and relaxing. To Jewel Match 2‘s credit, there’s plenty of levels to play with a variety of different layouts.

Unfortunately, aside from the spell power-ups, there’s nothing new to get excited about. There’s no story to speak of, so it’s really just about the game. If you’ve already played a couple of match-threes and are generally neutral about the genre, you’re unlikely to be blown away by anything you see in Jewel Match 2. Because of this, is probably best suited for hard-core fans who can’t get enough of match-three, or those who’ve never played a tile matching game before and want one to start with a typical one.