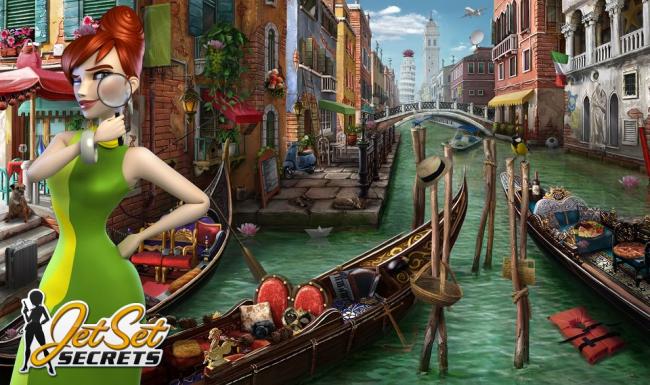 JetSet Secrets promises gold and glory, but instead we wind up with the usual fistfuls of pyrite

You can count on the sun to rise in the morning. You can count on spring to follow winter. And you can count on one of Facebook’s hidden object games (HOGs) to closely emulate the formula that was initially laid down by Gardens of Time some years ago. And yet EA has supplied us with JetSet Secrets, a title that offers small break in the ordinary. It’s a detective HOG that attempts to buck tradition, and in a few ways it succeeds nicely. Unfortunately, it’s still shackled by scads of social HOG failings and isn’t anywhere near a perfect experience.

You play through JetSet Secrets as a detective who shacks up on a sweet island hideaway that’s already occupied by some of the greatest (and most cunning) minds in the world. Your job is to band together with your new roomies to solve big crimes that have stumped the best authorities.

Most of the actual problem-solving falls to you, and your co-workers offer their services in the background. This gives rise to an interesting mechanic in JetSet Secrets that lets you build and upgrade structures that can give you a leg-up. For instance, building a kitchen/lab hybrid for your scientist/cook friend lets her develop a quicker-charging magnifying glass that points out objects of interest in hidden object scenes.

As for the hidden object scenes themselves, there are many, and they all look pretty good. The usual routine applies: look through the tangle of stuff and single out the objects that are listed, menu-style, at the bottom of your screen. Ah, but there’s another twist—JetSet Secrets occasionally shakes up the field by changing the rules. Sometimes the list of objects you need to find all have scrambled names. Sometimes you need to play through a “blitz” and find as many objects as possible before time runs out. And sometimes you need to “Spot the Difference” between two seemingly identical versions of the same screen.

The breaking of tradition in JetSet Secrets should impress Facebook HOG veterans, but sadly, the game’s strengths make you all the more aware of its weaknesses. EA slathers on the social elements in layers; this is not a game for single players. Almost every action and upgrade requires you to harass friends for special items. Worse, EA pours on these mandatory interactions early in the game, so unless you have a passel of friends that want to play with you, you won’t get a chance to experience all the cool stuff that JetSet Secrets does with the genre.

To be fair, if you do have friends that are ready to play, EA has implemented some fun features, like the ability to solve cold cases in your friends’ gardens. It’s a nice change from the usual orders to go around and poke at your friend’s buildings.

But Facebook friends can’t alleviate JetSet Secrets’ second massive issue: bugs. The game frequently stalls and crashes, leading you to click “Refresh” nearly as often as you click on clues in hidden object scenes. EA has already set up a game forum to keep track of bugs. It’s quite active, which is pretty telling.

JetSet Secrets tries hard to change Facebook HOGs, so it’s disappointing to see its potential reined in by other problems that plague the genre. Still, EA has set a precedent here. Maybe someone else will pick up the ball and run with it.