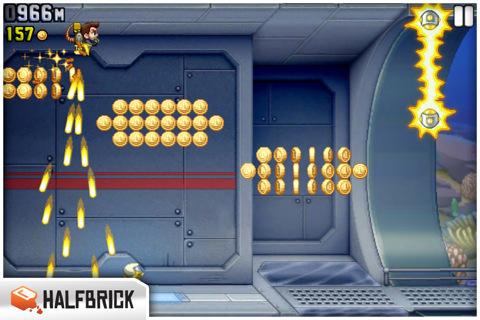 Jetpack Joyride lets you strap a machine gun to your back so you can fly — what more do you need to sell you on this concept?

In his short career as an iPhone action hero, Barry Steakfries has been a lot of things. He was a long distance runner in Monster Dash. He was a top down Rambo in Age of Zombies. And now, thanks to Jetpack Joyride, Barry can add amateur Wright Brother to the list.

Taking the ever-popular “machine gun jetpack” weapon from Monster Dash and building a new game around the mechanics, Jetpack Joyride is an endless survival game that’s all about fighting gravity with bullets. Using simple one touch mechanics, players will touch on the screen to have Barry propel upwards on the kickback of bullets and lift their finger from the screen to help him fall in accordance with the laws of physics.

And you’ll need to lift and press your finger a lot – the world of Jetpack Joyride is riddled with deadly obstacles for Barry to navigate around.

Most of these hazards come in the form of pulsating electrodes that create a static line of electricity between them. Fly into one of those and you’ll be having well-cooked Steakfries for supper. The further you go, though, the more challenges Jetpack Joyride throws your way. Expect missiles to come flying in from the side of the screen and floating laser fields to try and zap you in their web as you fly deeper and deeper into the compound that’s under Barry’s one man assault.

Thankfully you won’t be trying to survive on your good looks and machine gun jetpack alone. Barry will be able to access vehicles by flying into a certain icon when it appears. These not only offer an extra layer of protection (Barry can now take one hit that will destroy his vehicle and still survive), but they add a nice twist to the game, with each vehicle offering some unique gameplay. The “Bad As Hog,” for example, is a motorcycle that will increase your speed through the level and do jumps, but can’t hover as your jetpack does. And the “Crazy Freaking Teleporter” floats through the air with a roving target, and every time you tap, you’ll teleport to where that target is roving at the moment.

Like most endless survival games, the big draw here is beating your own high score and the high scores of your friends. The game supports both OpenFeint and GameCenter leaderboards, but what’s more, it has its own levelling system that should keep players striving to conquer new goals on a regular basis.

Player levels are determined by how many stars you earn, and to earn them you’ll be asked to do specific tasks like “high five 10 scientists” or “finish a game between 300m and 400m.” Levelling up helps you to earn more coins, which then leads to Jetpack Joyride‘s other reason for replay – in-game shopping.

As you play, coins will be scattered throughout the compound for Barry to try and collect. Once you’ve earned enough you’ll be able to buy everything from new costumes and jetpacks (the steam-powered one particularly tickled my fancy) to vehicle upgrades and one-off items to help you improve performance. Jetpack Joyride also has a neat slot machine mini-game that happens at the end of each play so long as you find special coins. In here you’ll be able to unlock neat bonuses that mirror the rather pricey one-off items in the shop. 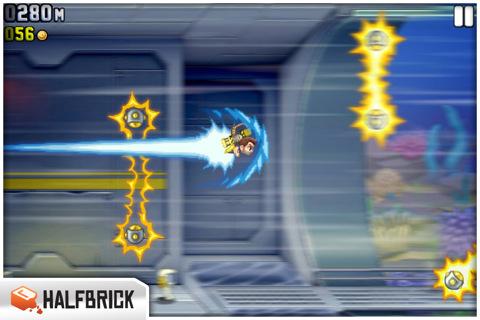 Jetpack Joyride also pays a lot of respect to its iOS indie gaming contemporaries by featuring a handful of notable cameos. One of the vehicles you can use, for example, is the gravity-flipping suit from Gravity Guy. A quick visit to the in-game shop will let you buy both the helmet and fatigues from Fragger. The game even takes digs at some of the more notable competition. The first time I took a ride in the “Profit Bird,” a vehicle that looks decidedly like the Angry Birds mascot and haemorrhages money as it flaps it’s wings (and opens its mouth to gobble up coins), I couldn’t help but laugh out loud.

Then again, laughing out loud is a pretty typical result of playing one of Halfbrick’s Barry Steakfries games. From the gentle classical music that’s interrupted by Barry’s rock’n’roll crash through a wall to his high fiving scientists as he runs along the ground, Jetpack Joyride is filled with charming little moments that can’t help but make you smile. After all, it’s a game about a guy with a machine gun powered jetpack – how are you not smiling at just the thought of it?

Halfbrick is one of only a handful of developers that seem to impress with every release on the App Store, and Jetpack Joyride is no exception. Is it yet another endless survival game on the App Store? Sure. But it’s one that’s brimming with personality, challenge, and a machine gun that you wear on your back to fly. If that doesn’t say second amendment, I don’t know what does.