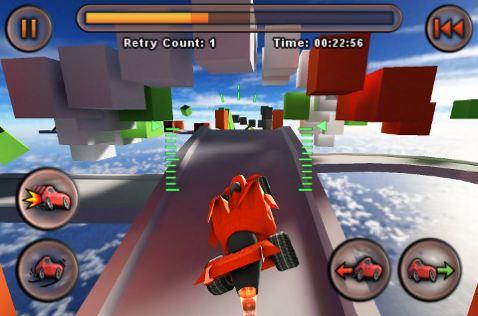 Driving a powerful race car off insane daredevil jumps at high speeds is dangerous enough on its own. Imagine doing it on a winding course located many thousands of feet above the planet’s surface. When you have to look down to see the clouds, you know you’re in for a wild ride. Aside from being a solidly built and addictive iPhone racer set in the stratosphere, Jet Car Stunts is a lesson in punishment.

The iPhone’s tilt sensor is put to good use in Jet Car Stunts. Behind the wheel of a fiery red hot rod equipped with rocket boosters, you’ll speed through some crazily designed obstacles courses by tilting the iPhone left or right to steer. Comfortably spaced touch screen buttons let you hit the gas and breaks with your right thumb while handling rocket boosts and air braking with your left thumb. The car handles remarkable well with this setup, and it’s quite responsive. How you choose to handle driving on the actual courses themselves is where the challenge is found.

Two racing modes offer different ways to play, and you don’t have to be an adept virtual racer to pick up the intense obstacle course-style gameplay. The main Platforming mode tasks you with successfully making it to the end of each danger-packed stage while hitting every checkpoint you find along the way. It’s less about traditional racing and more focused on staying on the track, whereas Time Attack stages have your running laps against the clock. While the normal difficulty setting gives you a finite number of retries and limited rocket fuel to work with, there’s also a gentler casual setting that’s far more lenient.

Most tracks sprawl out through a series of tight corners, vast jumps, and other obstacles that require precise timing and speed control to keep from flying off the track and into the endless clouds below. The photorealistic backdrop is certainly beautiful, but it’s not a view you’ll want to spend too long gawking at if you want to keep your wheels on terra-firma. In contrasts, the car and track feature more of a blocky look, but it all blends together pleasantly. 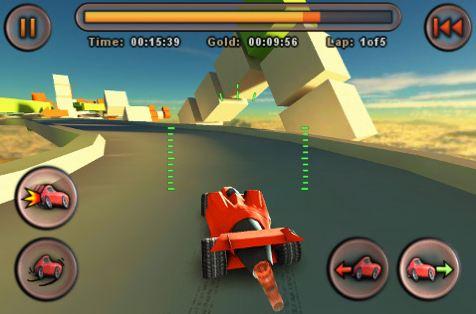 Players who’ve previously experienced driving games will have an easier time adjusting to the difficulty curve that’s found in the dastardly level designs. Even with excellent control and vehicle handling, it’s not easy to navigate many of the courses on the first try. The beginner tracks are tricky. Later courses are downright insidious. Long distance jumps have to be hit at just the right speed and with the proper aim. The slightest miscalculation or slip of the thumb can send you hurtling off the track or into a blocky obstacle. The latter makes your vehicle shatter into itty bitty pieces.

No matter how hard you try, it’s impossible to avoid countless crashes and wipeouts. The checkpoint system alleviates some of the frustration. Still, expect to have to re-play some tracks over and over again until you finally win. But Jet Car Stunts is like an old friend; No matter how much it might infuriate you at times, it’s hard to stay made at it for very long. Finally conquering a particularly hard track you’ve suffered through repeatedly is rewarding, and the sheer quality of this racer definitely outweighs the brutality it unleashes on your patience.

The Lost Cases of 221B Baker Street Review