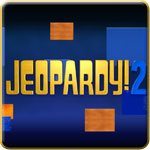 Answer: The Jeopardy theme. Question: What song was running through my head as I tried to write a clever lead for this review? While my intro might remind you of the popular quiz program — and put a catchy tune in your head — it doesn’t capture its spirit. To do that, I’d need music and visuals from the series, along with the charismatic personalities millions of fans have come to adore. So how does the new Jeopardy game stack up against such demanding criteria? Let’s find out.

Unlike the series, in which three contestants face off in a battle of mental brawn, the new game works as both a single-player and a multiplayer offering. After loading up, you’re given three options: Play Alone, Group Play and Daily Clue.

In Play Alone, you provide the question to as many clues as you can, opting to skip those you might not know and wagering what you wish on the Daily Doubles. The general structure follows the show, with six categories appearing on the board and five dollar amounts appearing under each category. The answer is shown first along with the option to respond or pass; if you choose to respond, you’re given four clues from which to select. Get it right, and you earn the dollar value for that clue; get it wrong, and you lose that amount. (While the multiple choice format takes away from the authenticity of the game, it keeps the rounds moving and makes the offering more accessible to casual users.) As on the show, expect an easy round containing one Daily Double and less prize money first, then a harder round with two Daily Doubles and twice as much prize money and then Final Jeopardy.

In another feature not possible on the show, you can earn up to 36 trophies for special accomplishments, such as earning $100,000 over the course of a single character’s “career” or for completing your first game. While I’d rather have Alex Trebek hand me a real check, the achievements are a nice addition.

Group Play can be done against the computer or up to two other human participants. For computer-controlled opponents, you can select from three difficulties ranging from easy to hard. This affects the response time of the A.I. and the number of clues they get right. On easy, several seconds pass after the clue appears before your opponents ring in. On hard, the computer is almost as fast on the button as Ken Jennings.

In Group Play, every human participant is given the opportunity to create his or her own avatar. Choices include gender, skin color, hair color and so on. During a Group match, each human contestant has his or her own key for ringing in.

The last option, Daily Clue, is intriguing. Going back as far as Aug. 2, 2007 and jumping as far ahead as Aug. 1, 2010, each day has its own clue. While you can tackle any of the past clues as well as the one for the current day, you’ve got to wait to attempt the clues for future dates. That gives me a little over a year to brush up on my knowledge of world soups in preparation for the Sept. 24, 2008 clue.

Unlike the first Jeopardy downloadable game, the sequel features 3D characters who share a library of victory animations and the same responses to the agony of defeat. The level of character detail is on par with such games as The Sims, so while the visuals aren’t stunning, they’re a step up from the crude sprites used in the original.

However, the developers should’ve gone further with the presentation. On the plus side, the quality of the clues matches that of the show. But although the heart of the series is in place, it skips a few beats. While you’ll hear the popular theme song along with familiar sound effects, without Trebek providing commentary and Johnny Gilbert’s famous tagline at the beginning, something fundamental is lost. Sure, it’s unreasonable to expect Trebek to read 3,000 clues for the game (the audio files alone would create a bloated download), but it doesn’t feel like Jeopardy without him somewhere in the mix.

And then there’s the interface, which does a poor job of explaining how to play the game. While instructions are provided, they’re offered without visual aids as a selection available from the main menu. From there, you’re on your own, as there’s no textual help elsewhere. Worse, the instructions don’t explain everything. For example, I learned how to select computer opponent difficulties and human opponents by clicking on the contestant portraits on the Group Play selection screen. That was pure luck, as there were no instructions indicating this could be done.

While the preceding two paragraphs might have dampened your enthusiasm for Jeopardy 2, give the game a shot. With the exception of the multiple choice format and the absence of the show’s hosts, the developer has created a worthy digital version of the celebrated quiz show. The rules and general format are just like the series, and there are plenty of well-written clues. Now, if I can just get that darn theme song out of my head…