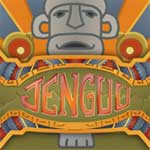 The idea behind Jenguu, a match-three puzzler from small, ironically-named Canadian developer Vast Studios, is solid: Players clear blocks that slowly stack up on posts by matching them according to their material and size. Alas, lazy design, poor production values, and an unfortunately low level of difficulty keep the game from reaching its full potential.

But I’m getting ahead of myself. Here’s how it works: Building materials (brick, steel, bone, etcetera) slowly slide down a group of totem poles. These pieces come in three sizes, and they’re cleared by placing larger pieces of similar material below smaller pieces on the same totem, then clicking the bottom of the post to make them disappear. Only nine pieces can fit on a column. Should a tenth fall before you can clear the others, the totem will freeze, grow vines, and become unusable.

Levels generally have a set series of goals, such as clearing a target number of blocks of each material or performing a certain number of stacks or double stacks (a stack is a group of three blocks of matching material that has been arranged with a large block on the bottom, a medium in the middle, and a small on top). The most challenging achievement in the game is the titular jenguu, which occurs when three stacks of like material (nine blocks in total) have been placed one on top of another on a single pole and cleared before a tenth block falls and decommissions the column.

It’s a basic and reasonably entertaining exercise in matching and clearing blocks. Regrettably, a variety of problems—most of which come in the form of ill-conceived additions to the core concept that come off as bothersome and feebly-executed fluff—keep it from being particularly memorable.

Like power-ups. There are eight special abilities that are unlocked over the course of the game. A couple of these power-ups are legitimately useful, such as the Column Buster, which simply destroys all blocks on a given totem and can help a player out of a jam. Unfortunately, the majority are more trouble than they’re worth.

The Magician, for example, changes nearby blocks to the same size as the one clicked without changing their material. However, to make effective use of this transformation you have to take stock of the rest of the blocks in play and figure out which shape you actually need—something I rarely had time to do in the heat of a puzzle.

Others, like the Randomizer, which arbitrarily destroys a few blocks of the same material as the one the player clicks on, don’t seem to offer any sort of tactical advantage at all, and are typically used only as a last resort when the player is running out of totem real estate and needs to clear some space—any space—in a hurry. In the end, I just left most of the power-ups alone, save when a puzzle’s winning conditions forced me to make use of them.

Then there’s the game’s coin system. As players complete puzzles they earn coins used to upgrade special abilities, making their effects more dramatic and decreasing the amount of time required for them to recharge. But the coins come so quickly and easily that I always had a vast store of them. I was able to purchase all upgrades for each new power-up as soon as I earned it with plenty of coins to spare, which makes the whole idea of earned upgrades seem pointless.

And that speaks to the greater problem of game difficulty—or rather lack thereof. I breezed through the entire game without once getting stuck. I’m not sure how things could have been made more challenging (perhaps blocks just need to descend a little faster, or maybe players should be provided fewer columns with which to work), but the game definitely needs to be tweaked to make it a little trickier. Still, at least there are plenty of levels. Working through more than 60 puzzles ought to keep a person playing for about eight hours. It’s just too bad players’ brains won’t really be put to any truly demanding test during that time.

Jenguu‘s final and perhaps most obvious liability is its narrative. Players are subjected to several abysmal animated movies depicting a scientist named Dr. Zeus (no relation to Dr. Seuss) as he quests to find an ancient artefact. The animation is frugal (to put it kindly), the text dialogue has several typos and grammatical mistakes, and the story is just plain lame.

It’s almost as if the designers knew how turgid these little movies were. How else to explain the fact that we have the option to skip them, or that completely ignoring them carries absolutely no consequence in terms of one’s ability to play and finish the game?

Vast Studios obviously had grand aspirations for Jenguu. But there’s something to be said for keeping things simple. Had the designers focused on cultivating the game’s fun and innovative block matching mechanics and tweaking its difficulty rather than wasting precious resources developing half-baked ancillary features and narrative, Jenguu might have been something special.

As is, people will likely spend much of their playtime thinking about all of the things they’re experiencing that simply ought not to have made it into the game.