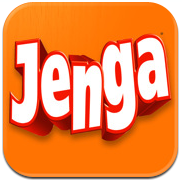 Test your steadiness in this digital version of the block-building classic.

For lovers of the tower-building party game Jenga, the digital version promises the same, dexterity-testing fun. The best part? You’ll be spared the heartache of losing blocks to black holes like the cracks between couch cushions, or a hungry-but-confused pet.

Like the original Parker Brothers version, Jenga is a game of steadiness. You’re given a tower of many small, rectangular blocks. Your job is to oh-so-carefully remove blocks from the body of the tower and place them atop the structure to keep the tower growing. Be careful, though, because if you knock over the taller and increasingly unstable tower, it’s game over. (In this computerized version, it’ll definitely be clear when the tower is on its last breath, as the structure begins to lean or wobble, but you’ll also seen a red “danger” symbol pop up in the corner of the screen.)

The most striking aspect of Jenga on the Mac version that we tested is how amazingly sensitive, realistic and accurate the game’s physics are. If you tap a block with even a smidgen of zeal, the entire tower starts swaying precariously, just as though you were playing the actual game. This sensitivity comes darn close to duplicating the challenge of playing the real Jenga, which, when you think about it, is an incredible feat. Changing camera angles, which is pretty key in a game like this, is a breeze. Simply click the background and drag the camera angle around until it’s the view you desire.

One gripe, though. The physics are so sensitive, that it sometimes becomes difficult to plop a block on the top of the tower. In real life, you’d still have to be careful, of course, but it’s easier to place the block exactly where you want it. You just need to do it gingerly. In Jenga for Mac, it’s sort of the opposite—the controls are so careful and responsive, it becomes difficult to put the block precisely where you want. You may want it directly on top of another block, but the tricky controls may plop it straddling a couple blocks. Long story short, placing blocks on the top of the structure is more work than it is in real life.

That relatively minor flaw is overshadowed by lots of great gameplay, however. There are three modes, in addition to the standard, classic Jenga challenge. There’s arcade mode, in which the blocks are multicolored and you must match colors for an extra challenge. In this mode, you can unlock bonuses, like extra time, since there’s a time limit working against you. You can also play online against friends or strangers, and up to four players can share the computer for a pass-and-play mode, which is similar to playing actual Jenga with a bunch of friends at a party, for example.

All in all, Jenga is a must-buy, especially for fans of the game, since the Mac version is so similar to the real thing, thanks to mechanics like super sensitive physics. Features such as the arcade mode and its unlockables, as well as online play, are fun twists on the familiar formula, but don’t adulterate the original Jenga concept beyond recognition. Nice-looking, addictive, and a real test of a steady hand—or mouse-clicking finger, in this case.