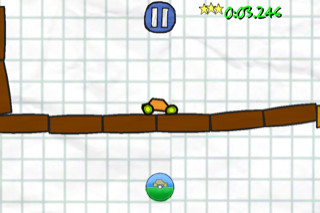 JellyCar 3 builds on the series, but doesn’t lose any of its simplistic charm along the way.

While the original JellyCar and its sequel have been tearing up the App Store charts for quite some time, only recently has Disney Mobile unleashed the third iteration. Taking the best from the last two should have been the developers’ focus, and it seems that’s exactly what they did.

Starting out in the game, you are given a small tutorial that explains how the game works. You control a small car using touch and tilt controls. The controls are very simple, in that you tap one side of the screen to move in that direction, while tilting is a more secondary motion. You’ll basically only need to tilt when your car gets stuck or lands upside-down. The ultimate goal is to guide this car to the end of a level as quickly as possible.

Being a timed game, it’s important that you have your car back on track in no time when something goes wrong. Thankfully, JellyCar 3 has a rewind mode that allows you to turn back the clock a few seconds to earn a second chance in the level. These rewinds are limited, and additional rewinds will cost you a few bucks. Of course, you can always just restart the level if you don’t want to waste them.

Along the way there are plenty of power-ups and obstacles that you’ll need to use your noggin to utilize. There’s a balloon power-up that allows your car to fly through the levels as long as there’s helium left, and there’s parts of the level that move constantly, requiring you to always be on your feet.

In the graphics and sound department, it’s all very cute and ties in with the simplistic style of the rest of the game. Levels and cars look like they were drawn on a sheet of notebook paper, and the sounds seem like they have come out of a person’s mouth. 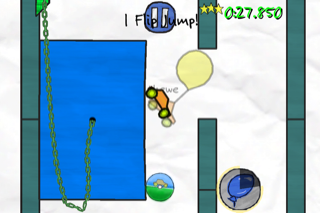 Having that said, there are a few shortcomings I found while playing, but they are mostly limited to a small list of elements I wish were implemented. In JellyCar 3, you can create your own car exactly as you please but there is no way for you to share it with your friends. Given the rest of the game’s focus on online leaderboards and ghost sharing, I figured a car design sharing option would be a given, yet is nowhere to be found.

Car designing can be an interesting distraction for a little while, but what could really elevate the series is a level editor. Creating your own levels and sharing them with the world would likely be a blast, and I’m shocked this isn’t part of the game yet. Being able to say that there’s unlimited levels would certainly be a big selling point for future iterations for sure.

Overall, JellyCar 3 is a very fun iPhone game that just about anyone could enjoy. Although it is missing a few features that seem like no-brainers at this point in the series, JellyCar 3 manages to deliver more of what fans love about the franchise.