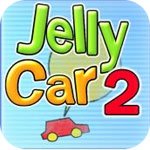 I’m the first to admit that physics-based puzzlers are not my strong suit, but when I saw Jelly Car 2, I was so intrigued that I just had to give it a try. Who wouldn’t want to drive a car made of jelly? The whole concept just sounds so appealing and fun. The basic idea: you drive a squishy car through a cartoon world to reach a specific goal. And while the graphics, sounds and gameplay really deliver on the promise of fun, there are some design and controls issues which hold back Jelly Car 2 from reaching its full potential.

First of all, if you played Jelly Car and enjoyed it, you’ll probably love Jelly Car 2. More of the same. Much more. But if you’re new to the Jelly Car franchise, you might be frustrated trying to figure out how things work (even after you read the help files). But let’s start with all of the things that are just delightful about this title. The hand-drawn sketches are fanciful, colorful and childlike – simply put, they are just oozing playful charm. I find that 2D graphics and a physics-based world collide nicely to provide hours of natural enjoyment. Your mind keeps telling you that the drawn lines are like those pictures your 5-year-old creates (and you feel compelled to put on the fridge), but the physics in the game tell you they are fixed or flexible or rigid or forgiving. There is much delight in this game just enjoying the way the line drawings are infused with life and structure beyond what your brain imagines they should be.

In addition to the imaginative artwork, the lighthearted soundtrack fits in perfectly with the theme. However, don’t be fooled by the childlike graphics and sounds. Jelly Car 2 is not a game for children. Young children could play around a bit, interacting with the Jelly Car and the objects in the game, but very few will ever be able to complete a level.

For older kids and adults, there is a lot of value in the affordable $.99 package: thirty new levels; four unique play modes; each new level is a puzzling challenge, not all of which are self-evident. Even with some concentrated effort, some of the puzzles are just down-right difficult. The developers are innovative enough to give you all new Jelly abilities like ‘sticky wheels’ (the ability to climb up walls) and ‘balloon ability’ (ability to float out of trouble) which definitely help you be able to spider-walk and/or float out of harm’s way. There are two mini-games within the levels that are worth trying. The “Long Jump” allows you to launch your car over ramps and see how far you can fly. In “Factory,” you don’t play with the Jelly Car, but rather rotate objects in a path to make sure falling shapes hit their designated area. Both are fun additional content that adds to the overall package.

Even though all of these silly features should add up to some serious fun, there is one critical flaw with that will probably turn off most casual gamers. The method of controlling the Jelly Car is anything but intuitive. Moving your car from left to right is done by pressing on the side of the screen you want your car to go. Press on the right, and the car moves to the right. Press on the left, and the car moves toward that direction. This sounds easy on paper, but it is not so simple in application. In fact, it is downright frustrating. The other aspects of the controls that can cause you to pull your hair out are tilting the phone and inflating the car. Tilting the phone affects the car’s rotation, but it doesn’t always behave as you would expect. Touching the car blows it up, but it is not often that this is an advantage and it throws off the rest of the controls in the process.

So, if the developers had done a bit more testing and fixed the touchy, less-than-intuitive controls, Jelly Car 2 would be a nearly flawless title. Even so, the joyful graphics and sounds and rock bottom price make Jelly Car 2 a tasty title you probably want to give a spin.