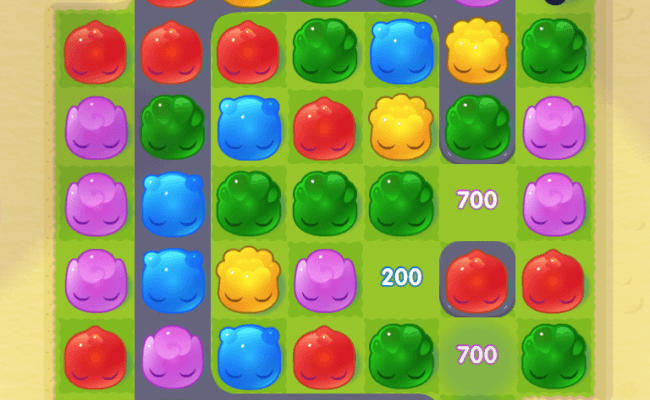 This sticky jelly won’t stick with you for long

In short, Jelly Splash is Wooga’s latest take on the unstoppable Candy Crush Saga format that has achieved such an unprecedented amount of success for developer King in recent years. In the game, players will find themselves clearing dozens of colorful, squishy jelly creatures as they make their way through the game’s 100 challenging puzzles to save the jelly kingdom from an evil swarm of invading purple mushrooms. But although some people might favor jelly over candy in real life, after popping hundreds of the little squishy guys myself, it becomes apparent that there’s very little substance to be found underneath all that tantalizing jelly coating.

In each level of the game, players are presented with a gridded game board that’s jam-packed with all sorts of adorable multi-colored jelly creatures. The goal is to draw a line connecting as many touching like-colored jellies that you can to wake them up and clear them from the game board. Making larger strings of matches will produce a special glowing type of jelly on the board, which can clear an entire row or column of neighboring jellies when matched. Jelly Splash offers up a handful of different level types, but none of them are anything that you probably haven’t seen before. From the basic “match enough jellies to reach the score limit,” to the more challenging, but still familiar clear ink spaces, free trapped jellies, and drop diamonds to the bottom of the game board puzzles, the parameters are just enough to keep the gameplay varied at times, while never doing anything that wildly inventive or unique. You’ll want to finish each puzzle in the least amount of moves as you can, as each leftover move will result in corresponding bonus chain reactions in the end-game Splash Time segment. 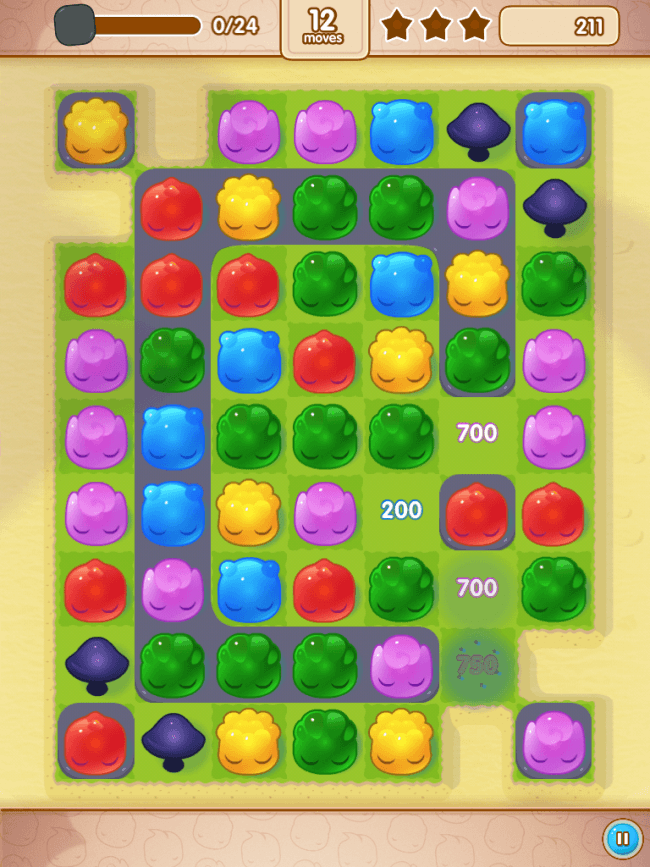 I think the biggest missed opportunity in Jelly Splash is the fact that the game ends up being completely devoid of any kind of power-ups to help you finish up some levels with better star-qualifying scores, or at the very least, to just change things up a little bit every now and then. Because of this, the game store itself feels especially underutilized. The only things you can buy in the store are more packs of coins, which can only be used to purchase more hearts when you run out of lives: nothing more, nothing less. You’ll lose one of your 5 hearts every time you fail a level, but since they regenerate at a rate of 1 per 30 minutes, there’s really not too much incentive to part with your coins, unless you’re really dying to push on and keep playing right then and there. This is great for people who despise microtransactions and want to make it to the end of the game without paying a dime, but there’s still something to be said about the lack of content and different gameplay options to be had here, regardless of whether they’re locked behind a paywall or not.

One of the biggest examples of how Jelly Splash tries to cut corners and do just enough to come across as a finished game is evidenced by the repetitive world map. Every 20 levels in the game are sectioned off by a different themed area, as the tiny icons wind down a sandy trail and showcase your earned star completions. The first of these areas is beach themed, the second is jungle themed, and the third is… beach themed again. The entire map alternates between these same two identical looking beach and jungle areas, and becomes a far cry from the wonderfully varied maps that we’ve been accustomed to in King games, which give us snow worlds, lava worlds, and everything else imaginable in between. Along these lines, the jelly creatures themselves are nice enough to look at, but everything about their character designs and the animations that occur when they’re cleared from the board makes me feel like there just could have been something more here. 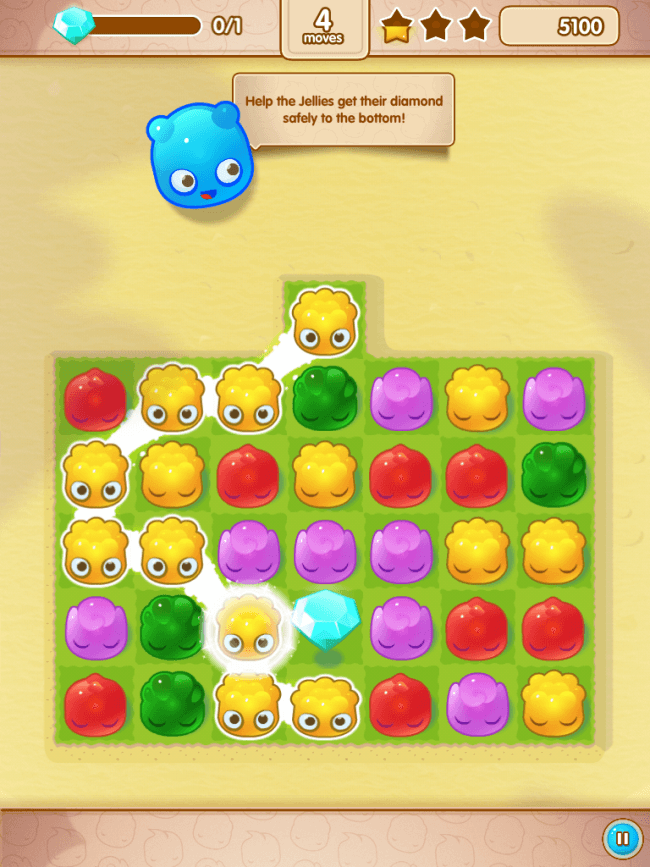 So in the end, I would be lying to you if I said that Jelly Splash wasn’t a decent enough mobile game. The bigger problem is that it’s hard to recommend playing it over many other similar games like Candy Crush Saga that do the very same things but with tons more personality and flavor, and which you’ve most likely already started playing before. With a real lack of twists to the formulaic gameplay, not to mention a lack of real content overall besides that which is simply repeated to feign substance, Jelly Splash ends up being an unfortunate sticky mess that you’ll want to clean off your kitchen counter, rather than a delicious experience that you’ll want to eat between two slices of bread.