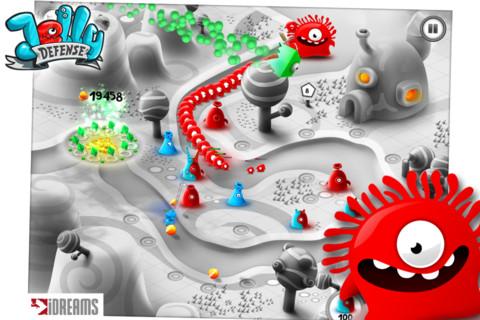 Jelly Defense has plenty of charm and polish, but the gameplay doesn’t impress as much as the visuals

I’m pretty sure that, during the pitch meeting for Jelly Defense, someone piped up and said “let’s make it a tower defense game that looks like it was designed by Dr. Seuss!” That may sound like a strange thought, but it fits: the game’s style is uncannily similar to the man’s celebrated books. Unfortunately, the title doesn’t feature anything close to the lasting appeal of something like, say, The Cat in the Hat, simply because its developers haven’t seemed to realize that a game’s content needs to keep up with its production values.

The story begins on a planet that appears to be a giant space turtle floating through the cosmos, rocking out to some quality music that plays over its headphones. The inhabitants of the planet, a group of jelly-mold creatures, suddenly find themselves invaded by another group of hostile jelly-beings. The invaders want the defenders’ green crystals and are kind (or stupid, depending how you look at the situation) enough to walk through wide open spaces in single-file lines in order to steal these gems. When they’re killed, they leave behind power-ups and coins for you to snatch, but don’t wait too long or these prizes will blink out of existence.

Since Jelly Defense is a tower defense title, the invaders have to march across winding paths on fairly large maps. In order to fight them off, you’re required to place your jelly defenders on pre-determined spots marked along the routes. The invaders come in two different colors —red and blue— and can only be attacked by defenders with matching hues (though some towers can hit both types).

Aside from the colors, there are a lot of variables when it comes to enemies, including size, speed, and toughness. For better or worse, the only way to really learn what towers work against which enemies is through experimentation. Do you build multiple towers all over the map? Do you research new tower types in order to create new weapons to use against the invaders? Or do you hope that building only a few and leveling them up will do the trick? Things start out easily enough in most of the game’s twenty levels, but they quickly turn difficult and can often become overwhelming as the waves progress. This difficulty curve is often frustrating, and it isn’t uncommon to restart a level after getting most of the way through it.

And that’s the main problem with Jelly Defense: it starts out fun, but turns frustrating after a little while because the levels become much too tough and there’s no way you can load a checkpoint. Instead you just have to start the level over. 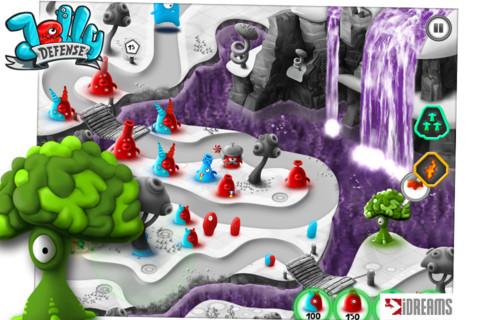 The standard gameplay mechanics and unfair challenge curve is a real shame, too, because this is an amazing-looking title. Everything about it is strange and cartoony, with unusual aesthetics that look all the more striking because of the high level of polish. The different units all look and move differently, and the death animations are particularly fun to watch. It should also be noted that the desaturated nature of the levels makes the color in the game even more delightful to look at. On top of that, the environments feature the Seuss stylings mentioned earlier, complete with goofy and strange landscapes that simultaneously contain their own weird beauty.

As tower defense games go, Jelly Defense starts out with the potential to be one of the greats. Unfortunately, it never really lives up to this possibility, and that’s really too bad because it manages to get some very big aspects very right in very big ways. It’s sort of like JELL-O that way: it looks like it’ll be awesome, but then turns out to be merely okay.