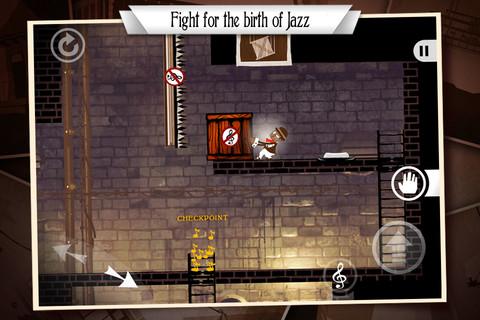 There’s something to be said about the strange. But even when things appear a bit odd, the stylization of it can truly make a game pop. Such is the case with the new iOS title of Jazz: Trump’s Journey. A platforming game set in what looks to be a 1920’s version of New Orleans. The title offers a semi-interesting story coupled with a beautifully wacky art style. Along with a few new, or at least uncommon, platforming mechanics, this release from BulkyPix is a quality number for fans of the genre.

Players follow the story of Trump, a young man in the Roaring 20’s that is seeking to make a name for himself as a jazz music star in New Orleans. Setting out to gather a band for an upcoming contest, players must steer Trump through a variety of levels saturated with a cartoonish style and fantastic jazz vibe. From the upbeat music with confetti and streamers to Trump’s derby, the game is certainly top notch aesthetically.

Since the story is pretty much Trump going from place to place in New Orleans, the levels are obviously hyperbolic examples of what they are in reality. Warehouses become vertical mazes of moving platforms, and parades evidently travel along a skyline. It all makes for decent platforming though, and while many common game mechanics are present, such as placing blocks onto switches, moving platforms, and wall jumping, there is at least one that stands out significantly.

For one reason or another, Trump’s trumpet has the ability to completely freeze time. Don’t ask, just go with it. Regardless, this time pausing skill gets used quite a bit in Jazz. As players progress, the creativity in which it is used tends to increase. For example, basic usages are merely the pausing of a rotating platform, while slightly more advanced tricks including using falling blocks, mid-flight, as places to jump. The app also contains several items that are not affected by time stops, meaning that players will often have to toggle the flow of time frequently.

Even the basics tend to get used in interesting ways from time to time. In one particular challenge, players end up having to freeze a falling wall at a certain height so that they can wall jump to an adjacent wall, leap off onto a swinging rope, then swing onto a ladder. Other gratifying moments include marginal enemies too, such as police officers that charge and try to arrest Trump (probably because he is jumping on parade flotilla). In atypical Mario-fashion, they’re eliminated by jumping on them, but such also provides a significant jump boost that is frequently combined with all the above mechanics.

The only real downside to Jazz is that its attempt to tell a story could have been done better. As noted earlier, the story is somewhat interesting, but for a mobile application, the gameplay is far more important. That isn’t so much the problem though, as it is that it’s all told in a rather long winded fashion. Cutscenes of Trump talking tend to bookend most levels, and while these can be skipped through quickly, there are several unskippable ones that are presented in a silent movie fashion. It’s thankfully not black and white, but characters will carry on for a while, and then present the slide of what they just said. It’s a decent choice stylistically, but some just seem to drag on for too long.

All the same, the play style of Jazz: Trump’s Journey is wonderfully enjoyable for fans of the platforming genre. While the title does make use of rather common game mechanics, it also has a handful of interesting ones, and at least makes an attempt to use the commonplace in more unique manners. Additionally, the game’s style is just fantastic, with any flaws being nothing more than picking nits. All that having been said, Jazz is a great platforming addition to the iOS platform.