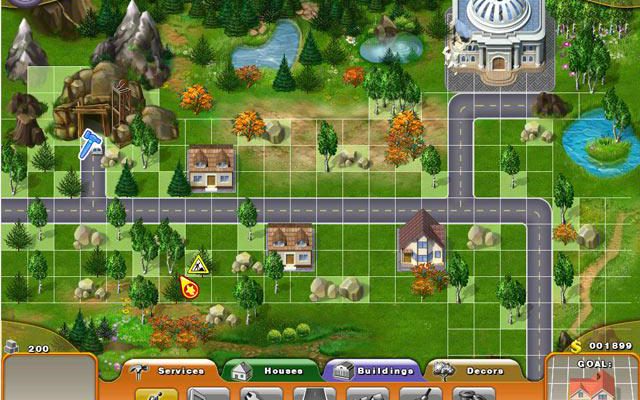 Most modern people hold down stupendously boring jobs, enervating affairs that primarily involve being chained to a computer screen or paperwork for about eight hours a day. I don’t think it’s a coincidence, then, that some of the most popular casual games are themed around jobs that involve physical, immediately satisfying tasks: running a restaurant, managing a hotel, taking care of pets. There’s a point in time when I could’ve imagined a game about real estate offering fun escapism to a bored office drone, but it’s pretty surprising to play something like Jane’s Realty 2 after the housing market collapse.

Then again, this isn’t really a game that idealizes your average real estate agent’s job. It doesn’t even have much to do with the first Jane’s Realty. The gameplay has been completely overhauled and all traces of plot or storytelling completely jettisoned. The titular Jane is no more than a mascot character who adorns the menu screen. Once you’re playing Jane’s Realty 2, what you’re really playing is a sort of casual stage-based Sim City clone.

Everything from the graphics to the difficulty curve has been drastically overhauled in Jane’s Realty 2. The game unfolds through about twenty-seven levels, each with its own completion goals. These goals are usually very simple things, calling for you to build particular types of houses or earn so much money. The game keeps track of how long it takes you to reach each level’s goal, awarding Expert status to players who can beat levels in less than a certain amount of time. Players who don’t care about getting Expert on a level can take as much time as they like to beat it. 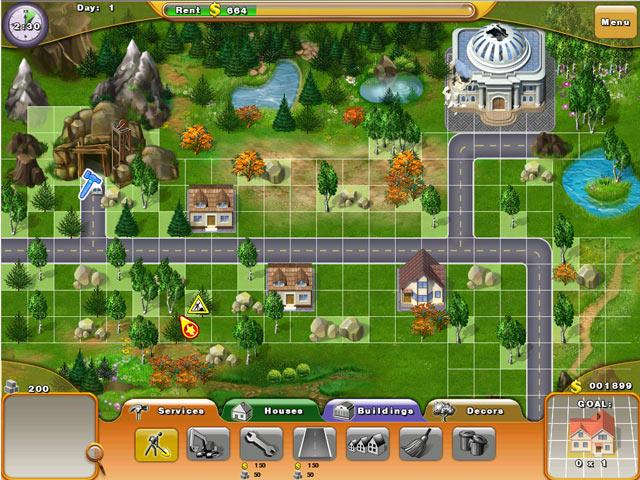 This major difficulty change makes Jane’s Realty 2 more playable than its predecessor, on the whole. Most of the goals you’re presented with are very simple. More than growing more difficult as you progress through the game, they really just become a bit more complex. Each level asks you to earn money by building houses and decorating them well enough that tenants will rent them. This is trivial at first and can be very tricky later on, when you have to get tenants into more expensive houses. Levels may also call for you to repair landmarks, build roads, or erect special buildings that offer bonuses.

Jane’s Realty 2 uses simple but attractive 2D graphics that make for likewise simple controls. Each level’s map is broken down into tiles on a grid, and different levels are grouped together by location. When you start playing at a new location, you’ll begin by clearing rocks and trees away from areas where you want to build. Doing this nets you resources, which you spend both on repairs and on building new houses. You also need to spend money on erecting buildings, so most levels have a few pre-positioned houses you can quickly get tenants into. Sometimes how you arrange houses when working on early levels in a location has a big impact on how difficult it is to get Expert times on later levels in a location.

Jane’s Realty 2 is not without its flaws. On a basic level, the gameplay is too samey as you move from level to level. The game seems intended to be something relaxing, judging from the ambient music and gentle sound effects, but sometimes the experience just gets very dull. While placing buildings on the map is simple, the interface is such that it’s very easy to accidentally bulldoze a new house when you’re actually trying to decorate it for tenants. Accidents like this may not force you to restart a level, but sometimes doing that is quicker than trying to scrape together enough money and resources to build the stupid thing a second time.

Completing Jane’s Realty 2 can demand upwards of six hours of playtime, but finishing the game just isn’t very satisfying. Whether it’s due to a lack of plot or the experience growing tedious as levels wear on is hard to tell. Regardless, Jane’s Realty 2 is a game that most people probably won’t enjoy enough to justify going beyond demo play. Much like the real-life real estate market (as of this writing): it’s something that’s just not fun to mess with for too long.