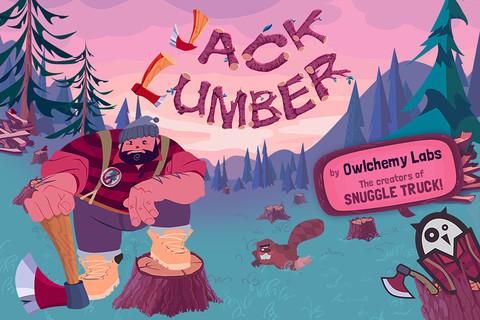 Jack Lumber is not the type of game you have to finish fully to really understand. It’s important to note, however, that I’m not saying this to disparage it in any way. Quite the contrary. I’m saying this because I’ve finished it fully. I’m saying this so that you know – if I slip up and tell you I’ve burned midnight oil to bring you this review – that I’m a liar. I’ve played Jack Lumber well past midnight, yes. But that’s just because it’s a really great game.

Developed by Owlchemy Labs (Snuggle Truck), and released as the debut of Sega’s mobile publishing initiative “Sega Alliance,” Jack Lumber takes us on Jack the lumberjack’s journey to get revenge on the mystical tree that killed his grandmother. Wow, that sentence has a lot of Jacks. Along the way , you annihilate other foliage, discover woodland creatures lost among the forest, and rescue them to help you in your swath of anti-conifer vengeance.

At the level of gameplay, Jack Lumber has been fetching a lot of comparisons to Fruit Ninja, and that’s understandable. Levels take the form of screens full of increasingly twisty – sometimes super powered – logs that fly up or across your view, and you amass points by slashing them frantically in two. Play a couple of levels, however, and you’d be hard pressed not to find so much more at work.

Sure this is Fruit Ninja. But it’s also Max Payne. And Nintendo’s cult puzzler hit Polarium.  By way of the Canadian wilderness. You see, far from fleeting swipes, you’re tasked with clearing progressively harder stages with one massive mega-slash, following the direction of the logs and never removing your finger from the screen. Things may fly into view with Sensei-style whimsy, but touch down to the device and you’re at a momentary bullet-time crawl, leaving you less than 30 seconds to plan out and execute your axerobatics before lifting your digits to see the damage: literally. Anything unscathed in your flight path escapes your grasp, and you’re given log points for all the rest. 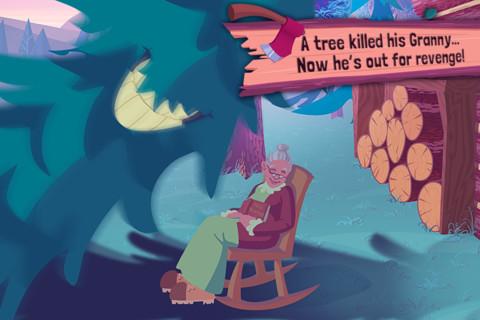 The result is an experience best described as a puzzler on speed. Increasingly, each zone of each level shifts from a palette to flex your swipe skills to a proving ground on which to test your reaction time, identify combos and patterns, and tie it all together deftly. From the moment each set of logs hit the stage, you’re kicked into high gear – all while being expected to maintain your focus. Trust me, though: opposites most definitely attract. There’s nothing quite so satisfying as slowing down a maze of twisty logs, pinpointing the best flight path for your finger, and spotting bonus areas where you can make extra “straight shots” – all while keeping your eye on the ticking clock.

Creatively, Owlchemy more than rises to the challenge too, spreading a healthy helping of variety across Jack Lumber‘s 25 levels in the form of context-sensitive obstacles. Logs you have to cut in a certain direction, bundles of logs that keep you on your toes as they split at the last second, bottles of maple syrup that – if hit last – send you to an “in-between” volley for extra points, elemental logs made of ice that can only slashed after those made of fire… the list goes on. Honestly if I lived in this kind of forest, I’d hate trees too.

And sometimes, hate is the name of the game here. Each level’s “spirit animal” serves as your star ranking, coming back to live in your cabin adorned with a swankier sash for every star level you achieve. But when one botched zone in a level often means goodbye to your three star dreams, Jack Lumber quickly becomes a perfectionist’s dream – and nightmare. That experience that all at once makes you want to hurl your iDevice in anger, while egging you on do better. 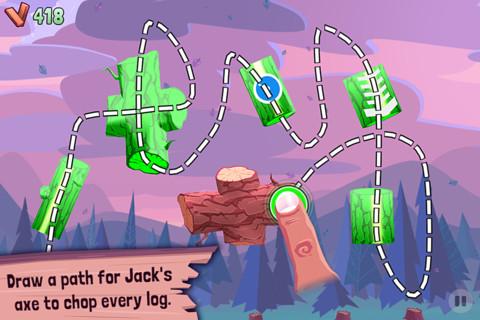 If this sounds like a bad thing, rest assured. The hallmark of a great arcade title is this very feeling; futile anger at the developers you know did everything right as they push you to get on their level, the blame resting squarely on you. There are exceptions to every rule of course, and there are a few moments in Jack Lumber when the hand you’re dealt sails past the realm of difficult and into the danger zone of obtuseness. Some sets of logs just don’t seem made to be surmountable without a ridiculous amount of demoralizing trial and error. Luckily, those blips are very far and few between. By in large, the difficulty ramps up fairly and steadily, with the last world throwing the gauntlet down for anyone that thinks they’ve got the game mastered.

Oh, and those cute woodland creatures I talked about? They’re wrapped up inside an oversimplified story and vibrant aesthetic so cheesy you won’t be able to resist a smile. The line between Jack and the evil tree is drawn self-referentially in the sand, while the game slowly parades a cavalcade of Canadian stereotypes, outdoorsy tropes, and mammal puns in front of you. Certainly not for everyone, but delivered in a way that feels refreshing in a story-starved arcade landscape, while ensuring it doesn’t overbear and get in the way.

Perhaps the only other things that do get in the way are the game’s single-use power-ups. Styled as “syrups” that slow down your zone timer, forgive log misses, and enhance your play, Owlchemy (or perhaps Sega) has chosen to opt for an “always-on” system wherein you have no choice but to use all of the power-ups you purchase in every instance in which they could be useful. Rather than give you a quick interstitial option to deploy the syrup that redoes a section for you if you miss a log, for example, Jack Lumber simply pulls the trigger for you, depleting your currency faster and disrupting the flow of the round by removing choice from your hands. On the whole, star-chasing is so fun that currency proves plentiful (you’ll earn hundreds of spendable logs each play of a level), but it would have been nice to savor – not guzzle – your sugary enhancements. 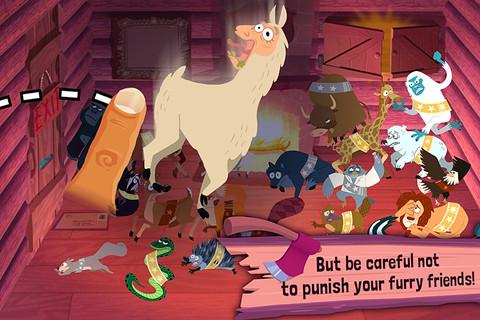 With that said, I’m still sitting here bleary-eyed, blister on my finger, totally satisfied for having played this game way past the time I should be in bed. And that’s before digging into any of the post game “tartan” levels, which challenge you to replay stages in order to earn a fabled fourth star (and tartan sash) for your animals. Doing so requires more than double some of the gold point values, and turns the game into a deeply strategic affair of mapping out the perfect slashes. So if you’ll excuse me, I’ll see you in the morning…where I expect you to have downloaded Jack Lumber. After all, I burnt midnight oil to bring you this review.