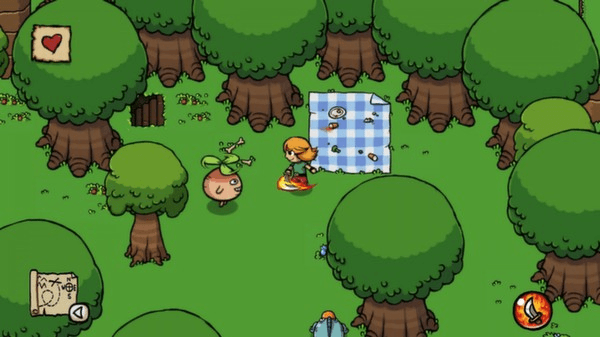 Ittle Dew makes no secret of its gaming inspiration.  The colorful action-adventure puzzler parodies and pays homage to The Legend of Zelda in gameplay, visual style, and playful jabs throughout its tightly-packed journey.  Yet Ittle Dew is far from a Zelda clone; a streamlined focus on puzzle-solving within a bizarre new world creates an experience all its own.  That experience should appeal to both fans and non-fans of the classic series, as well as anyone with an affinity for deviously challenging puzzles wrapped in self-referential humor.

Ittle Dew begins with our eponymous heroine shipwrecked and washed ashore on a random beach.  With only a moderately sharp stick and her winged-fox friend Tippsie as support, Ittle sets out in search of a way off the island and any treasure she can stuff in her pockets.  She soon meets the shopkeeper Itan who offers to build her a seaworthy raft in exchange for the mysterious artifact hidden in a nearby castle.  He also has three unique items for sale that may come in handy when artifact-hunting: a fire sword, ice wand, and portal wand.

The primary challenge and joy of Ittle Dew is in the creative combination of these items to solve puzzles and progress through the castle.  When the game begins, Ittle has access to only a few abilities: she can push blocks, stand on buttons, and use her stick to bash baddies, activate crystal switches, or carry fire for a short period of time (as long as a flaming source is nearby).  While these actions will get her through a few rooms that require little more than lighting a torch, it’s quickly evident that Itan’s unique items are necessary for progressing further.

Unlike the main Zelda series, in which puzzles and locked doors are frequent but not constant, Ittle Dew‘s primary castle dungeon is full of rooms that are always locked on at least one side, often more.  These doors are only unlocked by solving their associated puzzle, which vary from killing all enemies, to lighting bombs that will blow up blockages, to putting out fires with ice.  The majority of rooms, though, present some form of sliding block puzzle: Ittle will often have to move blocks onto buttons, slide ice blocks into fire, push bombs near walls, and a dozen other tricks that demand thoughtful consideration of the limited arsenal at hand, and the fact that Ittle cannot pull blocks, only push.

These Sokoban-style puzzles are surprisingly varied and challenging from the get-go.  This is where Itan’s items come in handy.  The fire sword replaces Ittle’s stick, providing a constant source of fire and a slightly stronger weapon.  The ice wand allows Ittle to freeze a variety of objects, including enemies, lit torches, blocks, and bombs.  The latter two slide in a straight line when frozen, stopping only once they hit an object or wall, allowing them to cross unnavigable areas like spikes.  The portal wand lets Ittle create a block, as well as transport certain objects to that block’s location.  This comes in handy in a ridiculous number of areas, and finding all the useful nuances of the portal wand—and the other two items—is part of the fun of Ittle Dew. 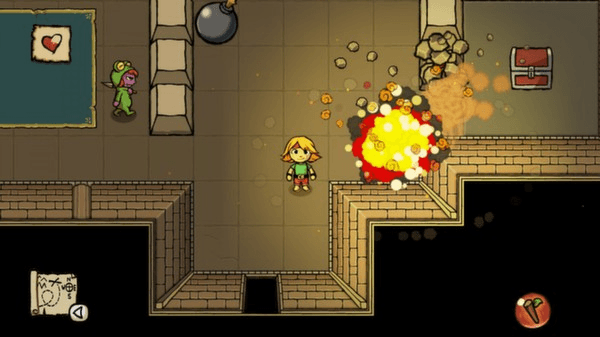 Another part comes from the fact that most puzzles, and the game itself, can be solved in multiple ways.  While you’ll need to collect and use all three items to reach 100% in the game, the main plot—reaching the final boss, artifact, and leaving the island—can be completed with only two of the items.  Specifically, any two: fire sword and ice wand, fire sword and portal wand, or ice wand and portal wand.  This opens up a wide variety of replay options and sequence breaking, as well as the opportunity for speedruns—which developer Ludosity specifically had in mind when creating Ittle Dew.  “Professional shortcuts,” featuring more complicated puzzles, appear throughout the castle and item dungeons, which are shortened even further by knowledge of solutions and tricks you may not have had on your first trip through.

Of course, even as you become accustomed to the types of puzzles and way of thinking required, the challenge is still significant.  I spent an embarrassing 20 minutes on the first puzzle of the optional “master cave” before the what-should-have-been-obvious solution finally came to me.  Thankfully, Ittle Dew provides frequent—and actually helpful—support throughout the game in the form of hint signposts, crazy old men—”Use buttons to win the game”—and aptly-named fan of chugging life potions, Tippsie.  Tippsie not only offers extremely useful guidance on what items are required to complete a given room, but also knows how to defeat the generally bash-proof bosses. 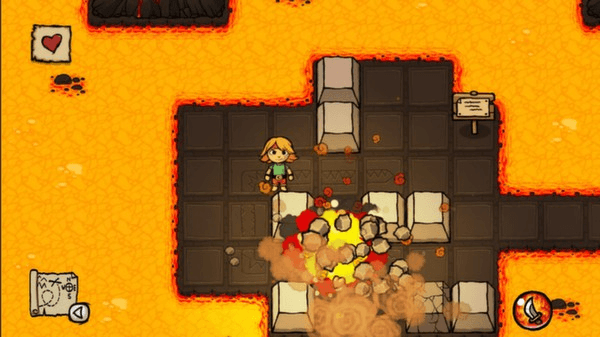 Although Ittle Dew is packed to the brim with puzzles challenging enough to require hints, it’s still relatively short.  An average first, non-100% playthrough is around three hours long, and the main quest can actually be completed in a 15-minute speedrun.  Completing the master cave and finding all the collectible enemy cards and life bar-extending pieces of paper hidden in treasure chests around the island should add a few hours of playtime.  The plot is minimal, with much of the game’s backstory filled in only during the end credits, but the quality and charm of Ittle Dew‘s puzzles and characters will leave you wanting more.

More bug-eyed platypi, more acrophobic rocks with wings taped to them, and more “incredibly ugly statues” with hilariously sad datasheets claiming “Their visage strikes terror into the hearts of their foes.  If only they had foes.  Or friends.”  Ittle Dew generously offers these moments while we explore its world, but they are moments that will remain even after we’ve left.  As will the image of Ittle eating a heart that she just found on the ground; five-second rule.