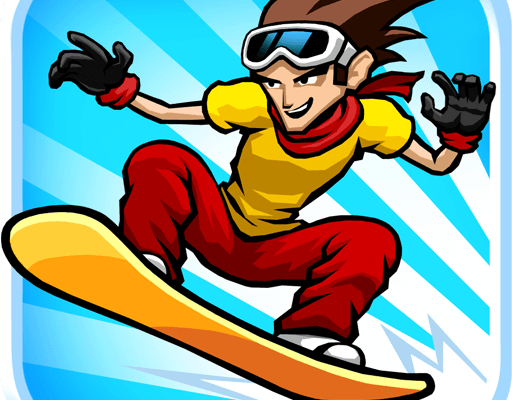 Speaking from experience, there’s a pretty steep learning curve when it comes to snowboarding. The first few days are painful, full of bruises, sore muscles, and (often) a broken bone or two. Basically, there’s a lot of falling down involved. However, falling down on a snowboard can sometimes be fun, as is the case with iStunt 2.

The game is a bit reminiscent of the old Sonic the Hedgehog games for the Sega Genesis (albeit without any enemies to fight against). Players control a snowboarder who speeds through levels and tries to collect stars while performing tricks and overcoming environmental hazards. At first, the dangers are just managing to get the character to land correctly, but they quickly increase to include jumps, gravity switches, ice spikes, bottomless pits, and even giant buzzsaws.

iStunt 2 utilizes both motion-sensing (to control the spin of the character when he’s in the air), and different touch controls to do things like duck/crouch, jump, and grab hold of the snowboard so tricks can be performed for extra points. Surprisingly the controls all work really well together, and even twisting the iPhone around is pretty easy to get the hang of. When the character crashes, players are presented with an option to start over from the last checkpoint.

While each level only lasts a minute or two on the outside, there are over forty different maps to play through, so it’s not like players will get bored quickly. Meanwhile, collecting all the stars in each level becomes increasingly difficult to pull off, so it’s likely that gamers will have to replay them a number of times before they get a perfect score.

Visually, iStunt 2 is great. The colors are bright, the graphics are 2D and look hand-drawn, and everything looks wonderfully crisp on the Retina display. Even the menus are fun to look at. Case in point: level selection is presented as a gondola line, where players move cars back and forth in order to choose a specific map. The soundtrack, meanwhile, is fun, and works well with the overall feel of the game.

iStunt 2 is a fun, fast-paced platformer that deserves some extra attention because its gyroscopic controls work so well. In order to master the game, players are required to replay several of the levels until they’re finally able to nail them flawlessly; thankfully, iStunt 2 is fun enough that the constant replay is an enjoyable scenario.