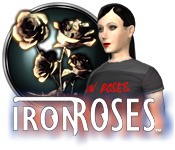 Alex is an out-of-work musician struggling to come up with rent money until she learns about a Battle of the Bands contest at her local club. This could be the big break that her former band, the Iron Roses, need to take them to fame and fortune! The problem is that all of her bandmates have gone their separate ways. Can Alex reunite the Iron Roses in time for the concert? And will they sound any good after all this time? You’ll find out in Iron Roses, a new point-and-click adventure game from Sandlot and Cateia Games, the folks who made The Legend of Crystal Valley.

Alex is controlled with the mouse, and she can talk to other characters, walk to different locations, and pick up items to add to her inventory to be used later on. The mouse cursor changes shape depending on how Alex can interact with something: an eye means she can look at it, a hand means she can pick it up, and lips means she can have a conversation with it.

Unlike the fantasy setting of The Legend of Crystal Valley, Iron Roses takes place in a gritty city environment. With the help of taxi cabs, Alex can travel from her apartment to the club, the music store, the clothing shop, the Internet cafe, a restaurant, and other important locations on her quest to track down the former members of the Iron Roses, gather instruments and equipment, and make sure everyone shows up to rehearsal. The graphics are realistic, the voice-acting is convincing, and the dialogue is well-written – which is a good thing, since you’ll spend a fair amount of time clicking through dialogue boxes.

A major improvement over The Legend of Crystal Valley is that the unwieldy diary has been replaced with a simple hint system. If you’re ever unsure of what to do or where to go next, you can click the hint button and Alex will remind you of what she’s supposed to be doing.

Pressing the "Enter" key also instantly reveals the locations of any exits in the room, and items of interest that can either be looked at or picked up. While this gets rid of the "hunt-and-peck" gameplay that can be such a frustrating part of playing adventure games, it swings the difficulty pendulum a little too far in the opposite direction. In other words, it removes much of the challenge. Of course, players with enough willpower might be able to resist using "Enter" to reveal exactly what to click on, but the scenes aren’t designed in such a way as to make these items stand out. For example, one puzzle involves having to pick out certain books from a bookshelf. Unless you use the hotkey, you’ll just have to click randomly until you find the books.

Many of the diversions from the point-and-click gameplay, which range from zapping computer viruses to serving customers in a diner to playing a rudimentary rhythm game on the guitar, seem more like afterthoughts than fully realized mini-games, and therefore aren’t very compelling. Another minor gripe is that the portions of the game that involve finding a certain number of something in a scene (such as torn pages or coffee cups) seem agonizingly slow because you have to watch Alex walk over to the object and do her "crouch down" animation every time.

Iron Roses isn’t as "epic" as some of the other adventure games in the genre (expect around four hours of gameplay), but the musical theme is fresh and fun enough to download the demo.