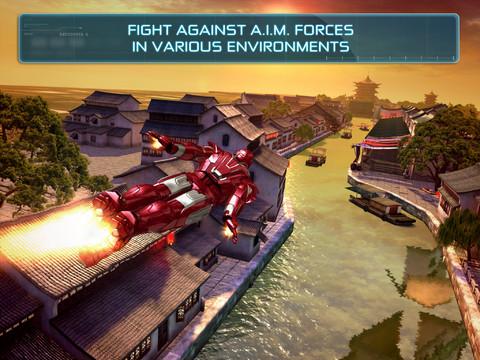 As much as I’ve enjoyed the Iron Man films, I just haven’t liked the games. Whether they’re for consoles or mobile devices it seems like Mr. Stark is stuck with a reputation for sub-standard quality when it comes to interactive media. Iron Man 3 is no different. Gameloft has managed to pull Stark out of the mud, clean him up a bit, and shove him right back down into the muck.

Iron Man 3 has the right idea when it comes to pairing a license with a specific genre. Having Tony Stark, and by extension the player, create and pilot 18 different Iron Man suits is a cool concept. It also makes sense to create a more directed experience by doing away with a half-hearted open world (or the illusion of one) and simply having the bucket head fly along a set path while avoiding obstacles and blasting enemies to bits. It’s a downright clever way of handling things, really.

I have to admit, Iron Man 3 looks absolutely stunning. It’s the kind of game people will show to their friends so that they can watch their jaws drop. Each of Stark Industries’ 18 suits sports quite a bit of detail and can be viewed up close from the main screen. They also look pretty darned great in action, too. The environments are also suitably nice looking, although they tend to fly by so fast it can be hard to notice, and there are some great visual effects for all the laser beams and such. Plus with so many suits to unlock, construct, and upgrade there’s plenty to keep players occupied. That is, if it weren’t so dull to play.

Despite being one of the best-looking iOS games to have come out in the past year, Iron Man 3 doesn’t quite measure up when it comes to the gameplay. Both control options (tilt to steer as well as swipe/tap to steer) feel inaccurate and can lead to plenty of unintended collisions. Tapping the screen or holding and dragging to fire off small bursts of energy or a large beam, respectively, also feels a tad awkward. But those are just a few minor technical issues that can easily be overlooked. What can’t be overlooked so easily is the horrendous pace of the game itself.

This is designed to be a sort of endless runner (flyer) complete with power-ups, constantly changing mission objectives for added resources, and above all else inevitable player failure. So why would anybody create such a game and literally prevent someone from instantly jumping back in to the game for a follow-up run? I’m totally serious, too. After losing (which will happen) players are immediately taken back to Stark Enterprises. No passing Go or collecting $200 or anything. What’s even worse is that they then have to wait for the now damaged suit to be repaired. Asking players to wait 30 seconds doesn’t sound like much, but this happens every single time a run/flight ends. So rather than simply trying again immediately after failing I have to wait for the menu to load, either wait for the suit to be fixed or equip a new one, start another round, wait through another loading screen, sit through the admittedly slick-looking but unskippable and irritating “mission starts now” animation, then do it all again when I crash one too many times. No, Gameloft. Just no.

I would have been okay with a decent runner/flyer kind of game featuring Iron Man. I was actually pretty excited to try something so simple yet enjoyable. Especially since I knew it came with a rather sizeable wardrobe. However this isn’t a “decent” endless game. Even the less than impressive ones understand the importance of being able to start a new game quickly. And making players have to wait and/or pay to repair their suits so they can get back to it faster only makes it that much more insulting.