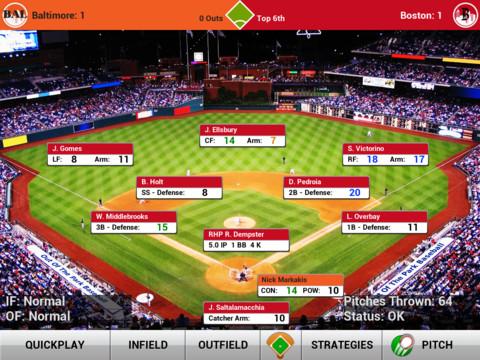 The iOOTP series is back with another home run

It’s spring again, the time a young man’s fancy turns to love. At least it’s that way for some. For other men and women, thoughts are invariably turning to the new MLB season and how best to simulate it on iOS devices. The reigning and defending champion of mobile baseball sims is back in its latest iteration, iOOTP 2013, showing why it’s unlikely to be giving up the title any time soon.

As fans of other sports video game franchises can attest (ahem, Madden), there’s always the possibility that the leader in a particular niche could set things on cruise control for a season or two. Fortunately that’s not the case with the small but committed team at Out Of The Park Developments, who worked a bunch of improvements into the game once again. Some are obvious, like tweaks to the interface, while others like the improved trade and contract negotiation algorithms only reveal themselves after diving into the game for a season or two.

How you play those seasons is a matter of personal preference. The game provides the quick options of starting a new game with the default 2013 MLB rosters, a completely imaginary league with fictional players, or one of three historical season replays: 1901, 1902 and 2009. The start menu makes any of those choices a snap, and is probably less intimidating to newcomers than the one in the even more full-featured PC version of the game.

True baseball history junkies can start from any season and have new players join their league at the point they did in real life, though this requires purchases of new seasons. This can be done from within the game, and both individual campaigns and bundles of seasons are for sale. As usual, more adventurous players can choose to customize the size, name and composition of a league as they see fit, and a personal favorite of this reviewer is to start a new game with a re-draft of all of the MLB teams. Hey, it’s really the only way to give the 2013 Houston Astros a fighting chance, and it’s fun to see the budgets and expectations of the front office change as a result. 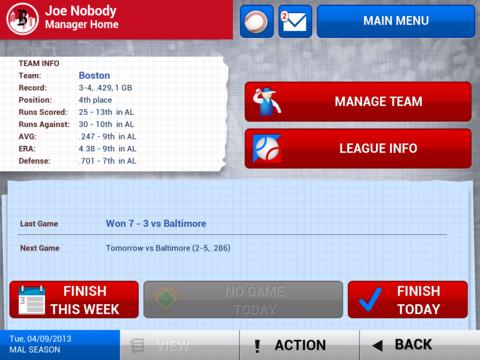 Once a season is up and running, the core gameplay hasn’t changed all that much. You get full control of your big league team in terms of roster moves and lineup shuffling between games, as well as 20 of the franchise’s top minor league prospects. This is probably the biggest concession made to scale things back for the mobile game (the PC game gives you the truly ridiculous control of the entire minor league system), but it also makes things more suitable for casual players without sacrificing a great deal. Development of prospects has also been revamped using the projection system of Baseball Prospectus.

Individual games can be simulated or managed as you see fit, and the in-game options include pitching, batting, baserunning and fielding commands. The action is relayed through a play-by-play text box that recreates a one-man radio broadcast (sorry graphics junkies), and while there is obviously some repetition, it feels like the virtual announcer learned some new tricks for 2013. If it happens in a real baseball game, you’ll probably encounter it at some point in iOOTP 2013, including things like a baserunner taking umbrage with an especially hard tag and batters stepping out of the box to get dirt out of their eyes. Games take about 15-20 minutes to finish, or more if you opt to see each individual pitch simulated. 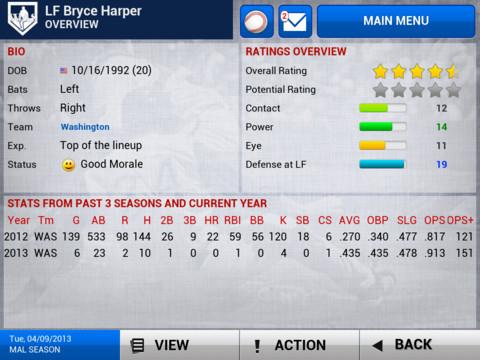 On the anecdotal side, the 2013 version feels more stable than last years in small but important ways. There weren’t any funky glitches in the post-game box scores, nor did I see any trouble with stepping out of the app to do something out and returning to a game in progress. I didn’t get to test it during the review period, but there is an option to download stadium backgrounds via iTunes to avoid looking at the same ballpark all the time. Real MLB team logos can also be added, but this requires some tech savvy and additional effort, and there’s no way to add player portraits to the game.

Chances are these little things will seem like nitpicks, because iOOTP 2013 is really a powerhouse when it comes to mobile baseball sims. Consider that title belt locked up for another year, and go ahead and download it to get your baseball fix on the go.