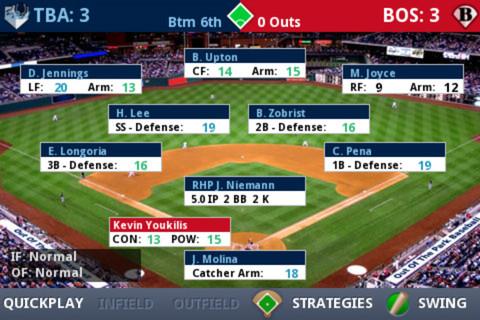 A baseball management sim that’ll fit in your glove

I don’t know how to code apps, but my guess is that it’s not too easy to pack a full-featured baseball simulation into 130 MB. Somehow, iOOTP 2012 Edition manages to pull it off, compiling all the stats and options necessary to play the (American) national pastime the way you want to play it on your iOS device. Armchair general managers of the world, this one’s for you.

As the company behind acclaimed PC baseball game OOTP 13, Out of the Park Developments already knows its way around the diamond. The challenge for iOOTP 12, of course, is to keep as much of the insane level of detail found in its sibling while repackaging it for the mobile crowd. It helps that this is a strict sim – and thus doesn’t rely on flashy graphics or a complicated interface – but the ways in which the flavor of real baseball shine through are still impressive.

The choices available to players are apparent right from the get-go, as new seasons can be started with the current (opening day 2012) MLB teams and rosters or in a fantasy set-up with a user-selected number of teams and divisions. Historical seasons can also be simulated; the game comes with three, and in-app purchases can be used to quickly add individual past seasons or themed bundles of multiple years.

Once the season is set, you take control as GM of your team of choice. And by control, I mean everything: setting lineups and depth charts, signing free agents, negotiating extensions, the works. The virtual owner sets a goal appropriate for your talent level, market size and payroll. If you are running the Yankees, the owner will expect you to win it all. As the Pirates, simply getting to .500 and ending the Bucs’ 20-plus year streak of futility will suffice. 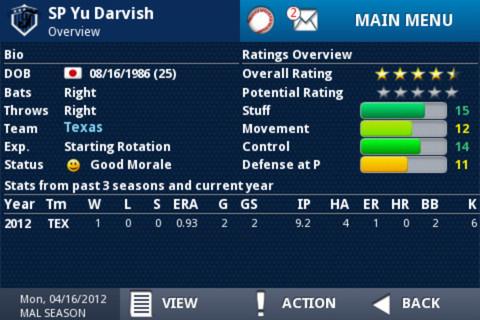 Touch controls make it simple to manage your team in the actual games. In lieu of visuals, iOOTP 12 relies on detailed text descriptions of each at bat. Yes, kids, that means some reading, but the color and humor make it fun to follow along. All the strategic options real managers have are literally at your fingertips, so if you’re playing by National League rules (a.k.a. the way the game should be played), pulling off that double switch is as simple as a few taps and drags.

In single pitch mode, a game can be completed in about 15-20 minutes, even allowing for plenty of time to fully read each play. A full box score is available at the end of each contest, recreating what my dad tells me used to appear in newspapers before the rise of the internet.

Then it’s back into the season menus to take care of more business. That could mean fielding trade proposals, checking up on the latest weekly awards or promoting a hot-hitting rookie to cover for an injury. Out of the Park Developments takes great care to ensure that it’s a “living season” that includes anything that might happen in real baseball. And since there’s no limit to the number of years you can play with your virtual team, it’s safe to say you’ll never see the same season twice, even with the game’s strict adherence to statistical accuracy. 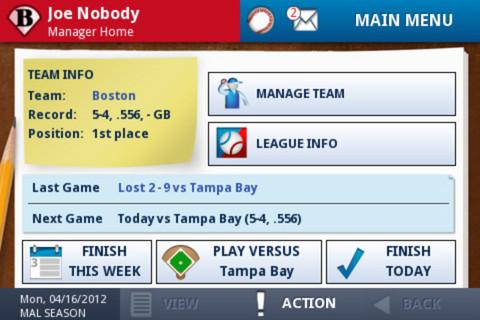 The amount of compromises made for the mobile version is relatively small. You won’t have a full minor league system to watch over like in OOTP13, though there is an annual draft that generates enough newcomers to keep your franchise stocked. Occasionally something funky will happen with box scores or the stats screens, but these seem to be temporary glitches instead of the kind that ruin games, and saving often generally keeps them at bay.

Granted, a hardcore baseball sim is a niche product, but it’s hard to see iOOTP 12 having any real challengers in its corner of the mobile gaming world. Fans of the grand old game are going to want this on their iPhones or iPads for all those times they can’t be at the ballpark.